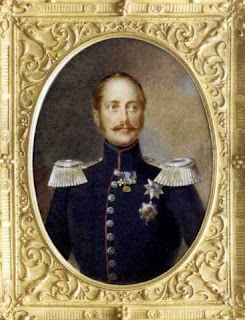 I - Tsar Alexei I: The ‘last hurrah’ of Muscovite Russia, Alexei I was a good Tsar, good to his friends, harsh to his enemies and a man of sincere faith who was not above correcting priests when they made a liturgical mistake -because he knew it all by heart. He had some problems with the Church but his personal faith was never in question. Alexei was, in some ways, the last “old school” Russian tsar, but he was not closed-minded and willing to learn from the west if it would make Russia better. Many of the accomplishments later attributed to Peter the Great were built on the foundation that had been set down by Tsar Alexei. Likewise, the territorial gains made by the wars during the reign of Alexei were a crucial starting point for the larger acquisitions of Peter later on. He improved the army and was an ardent monarchist who cut off trade with England after the regicide of King Charles I and sent assistance to King Charles II in his exile. He died during a war to defend Poland from the Turks.

II - Tsar Paul I: A controversial choice, but a favorite of mine, Paul I was another very monarchist monarch. He had his faults but, unlike many, he was aware of them and tried to mitigate them through living a very regimented life. He pressed for a better army, better conditions for the serfs and to make war on revolutionary France to see the legitimate monarchs of that country and Italy restored. He wanted to restore Malta to the Knights of St John, being their protector, but fell out with the allies when it became clear that Austria was intent on annexing Italian territory rather than restoring the former monarchs and that Britain insisted on retaining Malta rather than returning it to the Knights. Hoping Napoleon would be a counter-revolutionary he made peace with him and even contemplated an invasion of India as punishment for what he saw as British perfidy. These rather drastic foreign policy changes, along with his sometimes odd personality earned him the nickname of the “Mad Tsar” but his commitment to royal legitimacy was always at the heart of it. In truth, the accusations of insanity were probably put out as simply a means of justification for the plotters who overthrew him.

III - Tsar Nicholas I: One of my absolute favorites, from any country, Nicholas I came to the throne, unexpectedly, in 1825 and soon earned the nickname of the “Iron Tsar” for his rather firm style of ruling. He was a stern, disciplined monarch but a devoted family man as well. His rule of Russia is often summed up in three words: Orthodoxy, Autocracy and Nationality. He was committed to maintaining the centrality of the Russian Orthodox Church, the autocracy of the monarch and keeping Russia firmly and solidly Russian. Rebellions or revolutionary activity were dealt with swiftly and firmly and no immediate or potential threats to the Orthodox faith, the autocracy or the Russian people would be tolerated. Another very monarchist monarch, he was just as watchful for trouble abroad and was quick to offer help to any sovereign in danger from revolutionaries. Particularly after sending Russian troops to suppress the rebellion in Hungary against the Hapsburg monarchy he earned a new nickname, the “Gendarme of Europe”. He was successful in stamping out rebellion, defeated the Turks and improved education. He was in the midst of another war with Turkey, fought on behalf of the Christian position in the Holy Land when he died in 1855.

IV - Tsar Alexander III: A great monarch and a great man as well, Alexander III matches the perfect image one tends to have of a Romanov Tsar. He was a huge, powerful man and a strong ruler but also a man who adored his family, loved children, music and simple living. He favored the policy of “Official Nationality” of Nicholas I and dealt zealously with dissidents and revolutionaries. His government lowered taxes, enacted child labor laws and in hard times organized the aristocracy to respond with charitable giving rather than government programs. Industrial and infrastructure improvements increased and Russian power expanded in Central Asia. When Austro-German policies conflicted with those of Russia he allied with France and expanded Russian influence in the east by building the Trans-Siberian Railway. He died, beloved by his family and respected by his people in 1894.

V - Tsar Nicholas II: Many have criticized Nicholas II for being indecisive, however, what those people call indecisiveness I call a sober appreciation for the weight and responsibility, as well as the sacred nature, of his position as tsar. Certainly there were many problems during the reign of Nicholas II and of course mistakes were made, but much of this has been overblown. The reign of Nicholas II also saw great strides being made in industrialization and overall internal development. However, I admire him most for his personal qualities. He was very religious, a very devoted husband and father, a good judge of character and talent (despite what you may have heard) and a man of impeccable moral standards. In hindsight I can say that his greatest mistake was involving Russia in World War I (something he was not eager to do) but even then he was acting with very noble motivations. Under Nicholas, coal and iron production tripled, more people were educated than ever before in Russian history and despite what detractors say he was not bigoted or intolerant, blocking efforts to limit the civil rights of Jews for example. Likewise, his management of the war was not the total disaster it is often made out to be. In fact, Russia was showing signs of being on the verge of a massive recovery when the revolution broke out. However, it is more than enough that he was one of the most (perhaps the most) virtuous, upright and moral men to ever lead Russia.
Posted by MadMonarchist at 12:08 AM