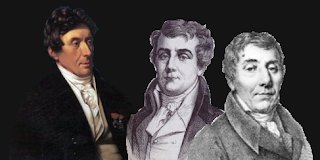 Louis-Gabriel Ambroise de Bonald stands out as one of the best known French counterrevolutionary thinkers. He was born on October 2, 1754 in Le Monna (Millau) in what was then Rouergue (today Aveyron). His Catholic faith and desire to serve the French monarchy characterized his life almost from the very beginning. He was given a top education by the Oratorians at the College of Juilly and after graduating served in the elite and famous Guard Musketeers. After King Louis XVI dissolved that unit in 1776 Bonald returned home where he earned a reputation for intelligence, fairness and soon enjoyed widespread respect. As a result, he was elected mayor of Millau in 1785 and in 1790 was appointed to the departmental Assembly representing Aveyron. However, Bonald was disgusted by the revolutionaries and could see that their hold on France was only growing. Like many, Bonald at first hoped that the Revolution might be somewhat beneficial and his primary aim was to maintain law and order rather than resisting on ideological grounds. That came to an end with the Civil Constitution of the Clergy which aimed to make the Church subservient to the State. He refused to force priests in his area to take the oath that went along with it, thus forfeiting his office. A year later, thoroughly disgusted with the Revolution, he decided to emigrate but he was certainly not running away. He immediately enlisted in the royalist army of the Prince of Condé. When that force was disbanded he retired to the German town of Heidelberg.

It was in Heidelberg in 1797 that Bonald wrote his first significant work on politics and religion which was of a sufficiently counterrevolutionary flavor to be condemned and banned by the Directory in France. His retired life was not to last long as he could not bear to remain outside the country while France was being torn apart by revolutionary extremism. Using the alias Saint-Séverin he returned to France and wrote more books on the social order, divorce and the legislative process. Pardoned by Napoleon in 1802 he was able to come out of hiding and work openly again. In collaboration with Joseph Fiévée and the vicomte de Chateaubriand he edited and contributed articles to the “Mercurede France” in 1806. These were later published in a book as well in 1819. In 1808 he declined the offer of membership on the Council of the Imperial University (founded by Napoleon, today the University of Paris) but in 1810 put his dislike of Bonaparte aside and accepted the post. His reputation had grown so great that Bonald had been asked to oversee the education of the son of Louis Bonaparte, King of Holland, and even the Prince Imperial, Napoleon II, King of Rome. He turned down both positions, being a monarchist of the royalist rather than imperialist persuasion.

As a staunch royalist, he was properly pleased when the Bourbon dynasty was finally restored to the French throne and was promptly appointed to the council of public instruction and became a deputy in the French National Assembly. In that body he became well known for his ardent, and fiercely reactionary, speeches defending royal authority, the place of the Church and, most famously, favoring censorship and even advocating for those found guilty of extreme acts of sacrilege to be put to death. Today, of course, many (especially in Europe) would view this as a shockingly extreme position. However, it is important to remember that this man had lived through in era in which people were executed for simply whispering a politically incorrect opinion, daring to disagree with the revolutionary government or simply being insufficiently zealous in their praise of the republic. Certainly that should be seen as the more outrageous use of capital punishment compared to certain, very specific, cases of insulting the Savior of mankind. In 1822 he was appointed Minister of State and was the presiding officer on the censorship commission. In 1823 his noble title was restored to him (he had lost it for refusing to take the 1803

He collaborated with other counterrevolutionaries in a series of works before finally retiring to private life. Throughout his life, Bonald stood out as a statesman who was always unchanging in his views. As Jules Simon said, “There is not to be found in the long career, one action which is not consistent with his principles, one expression which belies them.” Few others could say the same. He had served throughout the Bourbon restoration, supported King Charles X but refused to serve under King Louis Philippe, opting for retirement instead. He died in Paris on November 23, 1840. His legacy was of a deep-thinking intellectual and it is a shame his works are often reduced as simply reactionary opposition to anything liberal or progressive. Uniquely, he wrote about language being of divine origin and as the backbone of tradition and social development. This could be read and appreciated especially today. Language, communication in every form, regulates not only how we deal with others and the world around us, but sets the definitions for all of our thinking. He saw the forces of the Revolution perverting this tool to use in the pursuit of their ends which, Bonald believed, would ultimately be the death of all western civilization. The revolutionary mastery of this tactic allowed them to make formerly absolute and objective truths relative; simply matters of opinion, something which would ultimately unravel society and civilization as a whole.
Posted by MadMonarchist at 12:18 AM