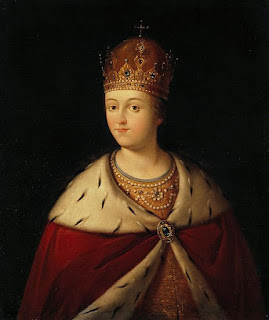 The Russian Empire is usually thought of in terms of the Tsars, the strong, powerful men who ruled the hard, vast country that is Russia. However, there were a number of very strong women in Russian history as well. One of these was Sophia Alekseyevna who would, eventually, rise to become the first woman to rule the Russian Empire. She was the daughter (by his first wife) of the great Tsar Alexis and, as such, could have expected to live a very quiet, secluded life, seldom heard from or even seen by the world outside the inner court. However, she had a very active mind and Tsar Alexis allowed her to be educated along with her brother Fyodor (the heir to the throne). Her other brothers, Ivan and Peter, were comparatively neglected in their education since the chances of either coming to the throne seemed so remote. Sophia soon proved herself to have such an active mind that others began to take notice. Simeon Polotsky, a monk, observed that Sophia had an “accomplished masculine mind” (a greater compliment then than it probably sounds today).

As she grew older, Sophia began to sit in on state council meetings and became acquainted with a number of the powerful boyars, something royal young ladies were not expected to do, but she seemed to rather enjoy pushing the envelop and proving that she could understand matters of state and even offer ideas just as good if not better than many of the men around her. In 1676 Tsar Alexis died and Sophie’s rather sickly brother became Tsar Fyodor III. He was quite intelligent (he spoke fluent Latin, which was unusual in that time and place) but was afflicted with a number of maladies since his birth. His sister Sophia became his most trusted advisor. However, this situation could not last long and in 1682, at the age of only 24, Fyodor III died and, passing over the blind and sickly Ivan, Peter became the new Tsar of Russia though he was only 10-years-old. This provoked some trouble in the family ranks as Peter was of a different mother than Sophia and Ivan and she did not want the Naryshkina family gaining power.

An uprising broke out in Moscow after the Naryshkina clan had Peter declared Tsar Peter I and the family of Tsarina Maria Miloslavskaya (the mother of Sophia and Ivan) put it about town that Fyodor III had been poisoned in a bid for power for by the Naryshkina who would rule through little Peter I. The Streltsy rose up in favor of Sophia and her family on the grounds that, despite his infirmities, Ivan was the legitimate heir to the throne. There was fighting in the streets, a number of killings and wild, defamatory rumors flew in every direction. However, Sophia had a plan and proposed a compromise. Her primary goal was to keep the regency out of the hands of Tsarina Natalya Naryshkina more than keeping young Peter off the throne. So, the suggested that the two brothers reign together as co-tsars but with herself as regent. The court did not like the idea of having two tsars at the same time, yet the Streltsy were on a rampage and Sophia impressed everyone with her talent and intelligence. Finally, the matter was all agreed on. Tsar Ivan V would take first place, Tsar Peter I the second alongside him and Tsarevna Sophia would be their regent. As per an earlier promise she made Vasily Galitzine head of government but, in an unprecedented move, Tsarevna Sophia had just become the first female ruler of Russia.

Naturally, this led to some ill-feelings on those who resented her rise to power and the image was put out of Tsarevna Sophia as being an overweight, immoral, scheming woman; the very picture of repellent wickedness. Fortunately, there is no evidence for any of this and it can be attributed to malicious gossip. She was actually quite intelligent, preferred agreements to bloodshed and was dutiful in matters of religion. As regent, Sophia kept Russia on a pretty even keel and free of trouble. Some early industrial development was accomplished and Russia became the first “western” country to sign a trade agreement with Imperial China. From the way she presented herself, it seems as if she intended to rule Russia for the long haul, having coins minted and portraits of herself done up with all the proper regal trappings. Yet, that was not how things were to work out.

As time went on Tsarevna Sophia and co-Tsar Peter I became increasingly antagonistic and paranoid. Each eventually became convinced that the other was about to kill them. Presumably, Sophia hoped that through her brother and any potential offspring she could continue to rule Russia as regent for pretty much the rest of her life. However, the clock began to run out for a regent being necessary for the young co-tsars. In 1689 Tsar Peter turned 17 and things came to a head. There is no real evidence that Sophia planned or intended a coup against him but Peter believed trouble was brewing and fled to a fortified monastery near Moscow. Sophia summoned him to her but it was no use and more and more officials began defecting her service in favor of Peter. It finally became clear she had no choice but to give up the game. Peter had her arrested and she was confined to a convent, eventually taking the veil. An attempt, some years later, by rebels to restore her to power failed and it is unlikely she was even involved in it at all. She died on July 14, 1704 as a simple religious sister, yet it was Tsarevna Sophia Alekseyevna who had been the first woman to rule Russia.
Posted by MadMonarchist at 12:09 AM