More Slander from the Murdoch Empire 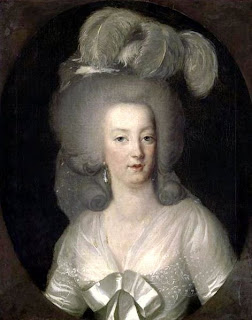 He has, on the occasion of the wedding of the Duke & Duchess of Cambridge no less, slandered the British Royal Family as robbers, presiding over an empire built on theft, tonight that bold, fresh piece of excrement Bill O'Reilly on Fox News Channel turned his hateful ignorance against the martyred Queen of France, Marie Antoinette. The subject at issue was a doctored satirical picture of Michelle Obama portrayed as the late Queen and the reaction of many Democrats that the picture was "racist". O'Reilly didn't think it was racist (nor do I) but he did think it was unfair to compare Mrs Obama to Marie Antoinette because the Queen was, in his words, a real "villain" and of course he brought up the old, "Let them eat cake" line which -as has been stated countless times- has been proven by eminent historians to be an absolute lie. This willing ignorance infuriates me to no end. If the comparison of Michelle Obama to Marie Antoinette was offensive or unfair to anyone it would be the late Queen herself. The Queen was as far from being a snob as anyone of her background could possibly be. She was not villainous, she was not uncaring and she died a pious and heroic death at the hands of godless, bloodthirsty traitors. I am not one of those monarchists who despises the United States or Americans on principle (some do, even American monarchists) and I even allow them their republican fussing because I know they can't really help it -to some extent they have to be that way or they have no reason to exist. However, I get fed to the teeth with this sort of drive-by royal bashing. It seems particularly outrageous when Americans (especially the ultra-patriotic sort) target King Louis XVI and Queen Marie Antoinette of France considering that without the intervention of His Most Christian Majesty the United States would almost certainly not exist at all.
To Bill O'Reilly, here's a "Fox News Alert" for ya: WISE UP YOU PINHEAD!!!
(breath...in...out...in...out...okay...)
Posted by MadMonarchist at 8:15 PM