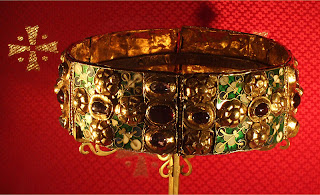 It may not look like much compared to some others, but the Iron Crown of Lombardy is one of the most significant symbols of monarchy in western Christendom. It is called the “Iron Crown” because of a small, narrow strip of iron that circles the interior of the piece. What is significant about this is that, according to tradition, this circle of iron was beaten out from one of the nails used at the crucifixion of Jesus Christ. That is where the story of the Iron Crown begins. As with most of the relics association with Christ and the crucifixion the nail was said to have been found by St Helena and given to her son the Roman Emperor Constantine the Great (the first Roman Emperor to be a Christian) who, so the story goes, later sent it to the Queen of the Lombards who were converted to Christianity. At some point the nail was incorporated into a crown though no one is sure exactly when. Some say Emperor Charlemagne was crowned King of the Lombards using the Iron Crown while others maintained it was not made until after his time. Kept in the Cathedral of Monza, near Milan, it was the most sacred and well known symbol of the Kingdom of the Lombards which grew up following the fall of Rome.

Ferdinand I became Emperor of Austria in 1835. Prior to that time he had already been crowned King of Hungary in 1830. In 1838 he had his coronation, using the Iron Crown of Lombardy as King of Lombardy-Venetia, at that time a part of the Austrian Empire. Incidentally, he was also married to Maria Anna of Savoy, daughter of King Vittorio Emanuele I of Piedmont-Sardinia, giving him a further Italian connection. Ferdinand would also be the last monarch to be crowned King of Bohemia though his successors on the Hapsburg throne continued to use the title. When Ferdinand abdicated as Emperor of Austria the throne of Lombardy-Venetia along with the rest passed to his nephew Francis Joseph I. There was never another coronation with the Iron Crown and Francis Joseph appointed his brother, Archduke Ferdinand Maximilian, Viceroy of Lombardy-Venetia. He would be the last to hold that position.

In the Second War of Italian Independence control of Lombardy passed to King Vittorio Emanuele II of Piedmont-Sardinia who, in 1861, became the first King of Italy. Before surrendering Lombardy the Austrians removed the Iron Crown from Milan and took it to Vienna, however, no one was to forget this ancient and sacred symbol of Italian kingship. In 1866 Austria was defeated in the Third Italian War of Independence (a parallel of the Austro-Prussian or Seven Weeks War) in which Venetia was ceded to the Kingdom of Italy. Also included in the peace stipulations was the return of the Iron Crown of Lombardy which was duly handed over to the House of Savoy and returned to its traditional resting place in Milan. The Savoy monarchs never had a coronation but the Iron Crown was used as a symbol, being carried in the funeral cortege of King Vittorio Emanuele II of Italy, probably to highlight his role in evicting the Austrians from northern Italy and uniting the country. The Iron Crown of Lombardy still rests in the Duomo of Monza in the outskirts of Milan (also known as the Basilica of St John the Baptist) along with a collection of historic Christian art and artifacts. The Crown, however, is by far the most famous of the pieces on display there.
Posted by MadMonarchist at 12:13 AM