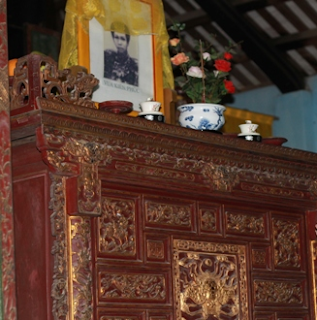 Prince Nguyen Cian Tong, Nguyen-Phuc U’ng Dang, was born on February 12, 1869 to Prince Nguyen-Phuc Hong Cai, Duke of Kien and the 26th child of Emperor Thieu Tri. At a young age he was adopted by his uncle Emperor Tu Duc (who was sterile and concerned about the succession) along with two other nephews, the future Emperors Nguyen Duc Duc and Dong Khanh. It was toward the end of the reign of Tu Duc that France was ceded control of Cochinchina (very southern Vietnam) and in the subsequent reign of Emperor Hiep Hoa a protectorate treaty was imposed on Annam (central Vietnam) of which the Emperor was supposed to remain in control of. The three powerful regents, Tran Tien Thanh, Nguyen Van Tuong and Ton That Thuyet, who had dominated the government since the death of Tu Duc, greatly opposed this (whether out of nationalistic fervor or worry over their own power remains debated) and, suffice it to say, Hiep Hoa soon turned up dead, followed not long after by the regent Tran Tien Thanh who thought his two companions had gone too far. All of this was timed so that the French Resident Superior in the Imperial City of Hue, Louis Eugene Palasne de Champeaux, was not present at the time.

Worried what would happen when the French learned that Hiep Hoa was dead, the regents hurriedly acted to choose a successor and the choice fell on the fifteen-year-old Prince-Phuc U’ng Dang. At a hastily organized ceremony on December 1, 1883 at five o’clock in the morning the teenager was enthroned as Emperor Kien Phuc of the Great South. Of course, when Resident Superior Champeaux returned to the capital he was outraged at what had happened and demanded an explanation for why a new monarch had been placed on the throne without France being consulted. He claimed that the Harmond Treaty that Hiep Hoa had signed required that new monarchs meet with French approval. He probably suspected what the real story was and was looking for any legal means to object because the Harmond Treaty was a pretty flimsy excuse since it granted France no rights or role at all in matters of the imperial succession. However, the regents responded with an even flimsier defense by claiming that since it was Hiep Hoa who had signed the treaty, and since he was now dead, the treaty was no longer valid.

Emperor Kien Phuc was in a precarious situation because of all of this as the French were not about to discount every agreement just because the last monarch had been murdered. Champeaux put French troops on the alert and sabers began to rattle, which seemed to have the intended effect. The same regents who had turned on the previous emperor for coming to an agreement with the French suddenly and quickly backed down from the threat of trouble and tried to smooth things over. They formally submitted a request to the French government that they recognize and approve of Emperor Kien Phuc, which they did. In general, as far as France was concerned, the new Emperor was a nonentity, too young and soon too ill to assert himself. It was Ton That Thuyet and Nguyen Van Tuong who, with their own circle of supporters, were really in control and they were rapidly becoming objects of distrust by the Imperial Family as much as the French.

During his short reign, Emperor Kien Phuc showed a great deal of potential and many Vietnamese historians have looked back at him as one of the great “might-have-been” cases in Nguyen Dynasty history. The scholars at court remarked on his great potential to be an effective and moral emperor, praising his upstanding character and later generations would surmise that he could have been a great, even legendary emperor were it not for the disadvantages of poor health and his domination by the corrupt regents Tuong and Thuyet. They remained in control even though, once Kien Phuc became emperor, the regent was supposed to be Prince Gia-Hung. During his time, Emperor Kien Phuc put his seal to a new treaty with the French (who were trying to remove all ambiguity after the earlier scare) which recognized Annam (central Vietnam) and Tonkin (north Vietnam) as protectorates of France.

What brought about his downfall remains somewhat disputed but the usual story involves Emperor Kien Phuc becoming a liability to the ruling clique represented by his adopted mother, Hoc Phi, who was the third wife of Emperor Tu Duc and who was having an illicit affair with the regent Nguyen Van Tuong. Later, some would even suspect that the queen and the regents were somehow intentionally keeping the young monarch weak and ill and there seems little doubt that he was chosen specifically as a figure who could be easily dominated. The matter came to a head when the morally upright monarch walked in on his adopted mother and Tuong in flagrante delicto in the palace one night. Outraged, he imprudently shouted at the two, “When I get well, I will chop off your heads down to the third generation”. Obviously, the regents were not going to allow the Emperor a chance to make good on his threat. So, as the story goes, Queen Hoc Phi put poison in the Emperor’s medicine soon afterward and after becoming violently ill the unfortunate Emperor Kien Phuc died on August 1, 1884.

This provoked outrage, both among the French and the Nguyen Dynasty. The head of the imperial family council, Prince Gia-Hung, began a secret investigation into the death of the emperor the following year but when Ton That Thuyet found out about this the prince was promptly exiled and thereafter mysteriously disappeared. All of these events convinced the French authorities that Tuong and Thuyet had to go and took action to remove them from power. They ensured, of course, that their authorities passed to the colonial authorities rather than to the next emperor but at least the era of royal assassinations was over. The ensuing struggle saw the outbreak of the Mandarins Revolt, the elevation of a more Franco-friendly monarch. The infamous “Year of the Three Kings” had passed but it would still be some time before Vietnam would again enjoy peace and tranquility.
Posted by MadMonarchist at 12:08 AM