The Death of the "Mad Baron" 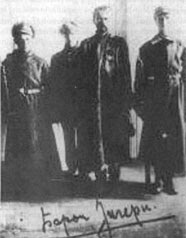 It was on this day in 1921 that the former White Russian general, liberator of Mongolia and pan-monarchist Baron Roman von Ungern-Sternberg was executed by firing squad after a short show trial in Novosibirsk. Like everything involving the Baron's life, his trial and execution were rather odd. After his capture he was paraded across Siberia like an exhibition in a circus freak show. Crowds gathered at the train stations to gawk at the last White Russian commander leading troops in the field, who the Soviets had made out to be the most inhuman monster. Yet, unlike other real or alleged war criminals in similar circumstances, Baron von Ungern answered all questions calmly and frankly. He denied nothing and openly confessed to almost every charge made against him (he was adamant that he had never been guilty of treason against Holy Russia). The first Soviets to examine him concluded that he was, at the very least not 'psychologically healthy' if not absolutely insane.

It was as well that he should have been so cooperative. Before the trial even started a telegram came from Vladimir Lenin that he should quickly be found guilty and shot. In fact, the New York Times reported his death four days in advance. However, while it was the Baron that sat before the Soviet judges, it was clear from the very start that they considered religion their real enemy and the root cause of the Baron's "crimes". The official word from the first was that he had been, "infected by mysticism" which was no doubt helped by the fact that his prosecutor, a Siberian Jew named Eme'lian Iaroslavskii, was a violent enemy of all religion and would go on to lead the "League of Militant Atheists". In his questioning he went to great lengths to make the Baron the image of Christian hypocrisy. However, the Baron was not allowed to present any evidence on his own behalf, absolutely no witnesses were called and the whole trial lasted a scant five hours and twenty minutes. Resigned to his fate, von Ungern declined to make a final statement.

It was 5:15 pm when he was condemned and he was immediately taken out to be executed. Many stories surround his death. He chewed up his St George Cross to keep it out of the hands of the godless Bolsheviks and how one of the bullets hit one of the amulets around his neck and a piece flew back and injured one of the Red soldiers. In any event, the Baron faced his killers calmly and bravely and his death was swift. Lenin and his fellow travellers could sleep a little more soundly at night knowing that the terrifying bogey-man of the Far East was safely in his grave. The Soviet press crowed their victory and inept Bolshevik scientists dissected the Baron's brain in an effort to find some explanation for his behavior. When the news reached Mongolia HH the Bogd Khan, once again a virtual prisoner in his own palace, ordered prayers said for their fallen liberator in all the Buddhist temples and monasteries of Mongolia. His reputation remains a black one even in Mongolia today, yet, few could deny that Mongolia would not exist as an independent country today had it not been for the actions of the Baron. He had restored the Mongol monarchy even if only temporarily before going down in defeat. His ultimate goal of restoring the Russian Empire remains yet to be accomplished. The life of Baron Roman von Ungern-Sternberg had been violent, mysterious, terrifying, exciting and rather short but it all ended before a Bolshevik firing squad 89 years ago today.
Posted by MadMonarchist at 12:13 AM