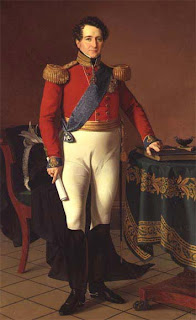 Most are aware that the Kingdom of Norway has an ancient history, however it was not until 1807 that Norwegian nationalism triumphed to the extent of gaining their own government separate from Denmark with whom they were then united. However, after Denmark supported Napoleon the Allied powers took Norway from Denmark and passed the country to Sweden (which had lost Finland to Russia) in the Treaty of Kiel of January 14, 1814. HM King Frederick VI of Denmark agreed to these changes in order to join the Allied coalition but he neglected to consult the government in Norway itself. The Norwegians rebelled and on May 17, 1814 declared their own constitution.

Naturally, the newly established Bernadotte Crown Prince of Sweden was none too pleased with these developments and promptly launched an invasion of Norway, resulting in a little war lasting about two weeks. Christian Frederick demanded that Sweden withdraw their soldiers before he would assemble the Norwegian government to discuss and vote on the possibility of political union. However, the Swedish army defeated the Norwegians who were also hampered by internal divisions with some members of the nobility opposing Christian Frederick. No countries ever recognized the independence of the Kingdom of Norway though most were also not too keen on a total war between Sweden and Norway. However, the clashes that had occurred did not give much confidence that Norway could have survived such a conflict in any event and so another convention was called.

The short-reigning King Christian Frederick of Norway abdicated his throne to the national government which agreed to a new treaty and union with Sweden. Prince Christian Frederick returned home to Denmark where he was treated with suspicion by many for his perceived liberalism. Nonetheless, although his effort to become King of Norway failed, lest anyone feel too sorry for him, he did succeed to the throne as King of Denmark in 1839 as King Christian VIII, reigning until his death in 1848.
Posted by MadMonarchist at 12:59 AM