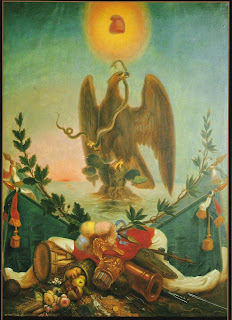 Today Mexico celebrates 200 years of independence -but not quite. A liberal holiday for Mexican republicans in general, this is not the 200th anniversary of Mexican independence but rather the 200th anniversary of a call to arms by a revolutionary, heretical priest (Father Miguel Hidalgo) who *might* have called for independence while inciting a race war in colonial Mexico which launched a failed effort to kill off the European-blood population. The man who actually secured Mexican independence, a conservative former Spanish loyalist who later became Mexico's first emperor, is largely ignored in Mexico. Father Hidalgo left behind no plan, no political manifesto and did not specifically call for independence or the overthrow of the Spanish monarchy in Mexico, which is often assumed, but rather simply incited a race-war in which he was unsuccessful and led to him being defrocked and declared a heretic by the Inquisition, declared a traitor by the state and ended in his execution by a Spanish firing squad. His cry, the 'Grito de Dolores' nonetheless became an established tradition, reenacted by Mexican leaders ever since. After coming to Mexico even Emperor Maximilian carried on the tradition. Nonetheless, monarchist Mexicans will have to wait until September 27 for their own, unrecognized, holiday.
Posted by MadMonarchist at 1:59 AM