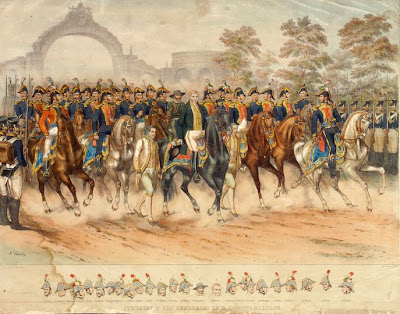 This is the day that, in the past (and perhaps a handfull of loyal souls today) Mexican monarchists celebrated their independence. It was on this day in 1821 that the "Army of the Three Guarantees" led by General Don Agustin de Iturbide rode in triumph into Mexico City. By happy coincidence this was also the birthday of the Libertador Iturbide. Victory arches were erected to celebrate the arrival of the army, pledged to unity, independence and religion. The following day the independence of the first Mexican Empire was declared and in due course General Iturbide became Emperor Agustin I, the first head of state of an independent Mexico. Although the memory of the great Mexican who actually delivered the independence so many others talked and squabbled about may be largely ignored or even sneered at today, he is a far more worthy champion to celebrate than the majority of others who are, most of whom were driven by hatred, foreign influences, jealousy and ambition. In honor of the occasion I offer my own alternative Grito somewhat different from that offered by President Calderon on 16 September.
Viva Nuestra Senora de Guadalupe!
Viva Independencia!
Viva Iturbide!
Viva el Gran Emperador!
Viva Mexico! Viva Mexico! Viva Mexico!
Posted by MadMonarchist at 1:19 AM