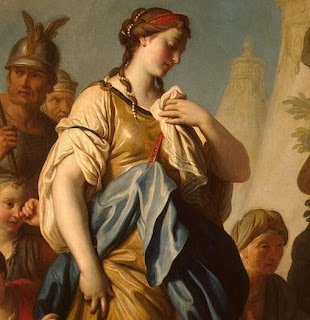 Queen Roxane, wife and royal consort to a monarch who managed to conquer virtually the entire world as he knew it, might be thought to have lived a very full and lavish life. However, Roxane, wife of none other than Alexander the Great, actually had a pretty rough time of it. No one can say when exactly she was born, only that it was sometime before the year 343 BC. She was the daughter of King Oxyartes of Bactria, an area located in what is now Afghanistan. Her name, also rendered as Roxana, came from a Persian term meaning “Little Star”. The Bactrian court secluded itself in the fortress of Sogdian Rock, an imposing defensive position surrounded by a seemingly insurmountable sheer cliff. When word came that the forces of Alexander the Great, which had conquered Greece and the Middle East, the King of Bactria remained confident that, come what may, no force on earth could ever reach his rocky retreat. He had, of course, underestimated his opponent.

In 327 BC the Macedonian king approached Sogdian Rock and determined that he would, yet again, accomplish the impossible. He picked 300 of his most agile and athletic climbers from the ranks of his army and sent them to scale the cliff in the middle of the night. A stunned King Oxyartes woke the next morning to find the soldiers in his palace and bringing him breakfast! The king was so shocked and crestfallen that his impenetrable fortress had been breached that he surrendered to Alexander immediately and without a struggle. Moreover, he also offered the hand of his daughter Roxane in marriage to Alexander the Great. According to Plutarch the meeting of Alexander and Roxane was love at first sight, though today doubt has been cast on this idea in preference for the narrative that Alexander, at that point, was already infatuated with his right-hand-man Hephaestion.

Whether Hephaestion was simply good friend or ‘long time companion’ can be debated but he stood by Alexander when he and Roxane were married. The marriage was done in the local Bactrian custom as Alexander was always careful to insinuate himself into the local culture rather than imposing a totally new one on conquered peoples. He later married Stateira, daughter of King Darius III of Persia for the same reason. However, the contemporary accounts state that Alexander and Roxane were devoted to each other and she was certainly devoted to him. She even accompanied him on his final campaign to conquer India; a land beyond the frontiers most knew at that time, shrouded in mystery and greatly feared. In the end, India proved to be the one campaign the unbeatable Alexander could not win and Roxane suffered alongside him as he left the subcontinent in defeat. However, things became even worse when Hephaestion died in 324 BC.

After this tragedy Alexander was continuously depressed and never seemed quite the same man that he had been before. It was thus, perhaps, not so great a shock that only a few months later Alexander himself died in Babylon, leaving Roxane a widow and pregnant with his child. A son was born to Queen Roxane and named Alexander IV Aegus. Because her son was a potential heir and successor to the world empire built by Alexander the Great, mother and son became the primary targets of a number of intrigues and plots. Given the ruthless methods used against her, Roxane was forced to be equally ruthless in order to survive and she managed the murder of Alexander’s other wife Stateira. Roxane felt she had finally gained a measure of security when she was supported and protected by her mother-in-law Olympias. However, Cassander, formerly one of Alexander’s generals, moved against Olympias, defeated her and executed her. Hoping to claim power for himself he could not allow Roxane and her son to remain. In about 309 BC Queen Roxane and her 12-year-old son were both killed by Cassander, wiping out the seed of Alexander the Great forever.
Posted by MadMonarchist at 12:16 AM