When one thinks of the old-fashioned image of a knight, one probably first thinks of the Knights Templar or other Crusaders fighting in the bleak lands of the Middle East, most of them being southern Europeans and, early on, even more specifically, predominately French. However, one of the three most famous crusading orders of knighthood had a very pronounced German flavor to it and that was the Teutonic Knights. Rather than fighting bandits and Muslim warriors in the burning sands of the Levant, the Teutonic Knights fought pagan barbarian tribes in the snow, ice and dark forests of the Baltic coast. Still, like the Knights Templar and the Knights of Malta, the origins of the Teutonic Knights can be traced back to the Holy Land as well. The Order of the Teutonic Knights of St Mary’s Hospital in Jerusalem was first formed to protect pilgrims and care for the sick and rose to prominence in Acre protecting the ports there in that last bastion of Christendom in the Middle East. It was recognized by Pope Celestine III in 1192 as an order of hospice monks using the Augustinian Rule and in 1198 it became a military order under the authority of a Grand Master. 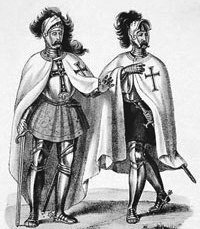 Under the Grand Master Hermann von Salza the Teutonic Knights became more prominent as the Holy Roman Emperor (and sometime excommunicate) Frederick II, the “Wonder of the World” made the Grand Master a Prince of the Empire and when Emperor Frederick II came to the Church of the Holy Sepulchre to be crowned King of Jerusalem it was the Teutonic Knights that served as his escort. However, as the Middle East was completely conquered by Muslim forces the Teutonic Knights were forced to relocate, which they did to what might seem an unlikely place; Transylvania. In 1211 King Andrew II of Hungary employed the Teutonic Knights to defend Burzenland from the Cumens, a powerful warrior nation of nomads from the steppes of what is now southern Russia. This they did, bringing numerous German colonists with them, and they stayed until 1225 when their growing power combined with an effort to place themselves under the direct authority of Pope Honorius III caused the King of Hungary to expel them. 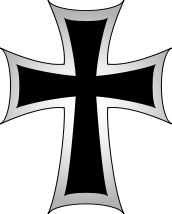 The Teutonic Knights wore a white garment with a black cross as their uniform and the black and white colors of the knights and their style of cross would become a long-established symbol in the history of the German and particularly the north German people and it all goes back to the Teutonic Knights. The black and white colors of Prussia, the decoration of the Iron Cross and even the symbol of the Federal German military today can all be traced back to the Teutonic Knights. In 1226 Duke Konrad I of Masovia, in what is now Poland, called upon the knights to defend his land from the pagan Prussians in the Baltic. So, for the next fifty years the Teutonic Knights fought fiercely but successfully in what became known as the conquest of Prussia. It was a long, bitter war that is not very well remembered today but one which was marked by extreme heroism on the part of the Teutonic Knights who fought usually against immense odds, facing the most horrific consequences if they were taken alive. History records knights captured by the pagans being roasted alive in their armor and offered as sacrifices to their pagan gods. They fought in bitter cold and in dark, dense forests and like most knights they built strong castles on this frontier of Christendom that were often islands of safety in a sea of pagan hostility. 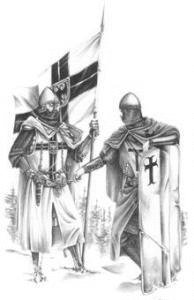 Over time, however, the pagan tribes were defeated and the local nobles began to be converted to Christianity. This became the core of what would become the Prussian nobility. The Holy Roman Empire, in agreement with the Pope, eventually bestowed upon the Teutonic Knights political control over the area as a sovereign monastic state under the nominal authority of the Pope. Slowly but steadily these pagans who had practiced everything from polygamy to cannibalism were converted and civilized. Clinging to the Teutonic Knights for protection it was only natural that they grew to become something of a warrior race yet again but from then on of a Christian variety. More than defeating the pagan tribes outright in a climactic clash, these people were gradually assimilated into Christendom under the leadership of the Teutonic Knights. This was also aided by the colonization of the lands of the order by German, Belgian, Dutch and Scandinavian Christians.

Livonia (Estonia) and Lithuania were absorbed into the Teutonic Order as well as were parts of Poland that had not yet become Christian. The expansion into Lithuania, however, came only after a significant setback. Previously, the plan had been to convert/conquer the Russians. However, the Teutonic Knights suffered what was probably their most famous defeat at the “Battle of the Ice” in 1242 at the hands of Prince Alexander Nevsky of Novgorod (today recognized as a saint himself in the Russian Orthodox Church). So, after having their fingers burned by the Russians, the Teutonic Knights turned to Lithuania in a bitter war that lasted for most of two hundred years. Resentment can still be seen today, yet the sizeable minority of Baltic Germans in these countries can be traced back to these original campaigns of the Teutonic Knights. When their focus fell on Poland the Teutonic Knights captured Danzig, driving out the invading Brandenburgers in the process. There were plenty of sad events of great cruelty but few people consider these events in the context of a group of hardened warriors who had spent their lives fighting the most ferocious enemies Christendom had ever faced, peoples far more savage and barbaric than the worst of the Muslim enemies other knights had battled in the Holy Land. 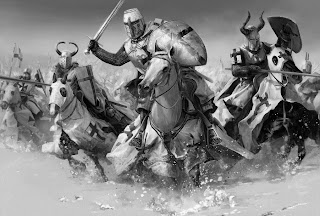 In about the Fourteenth Century the Teutonic Knights reached their peak of power and influence with vast lands stretching across what is today northern Germany and Poland, Lithuania, Estonia and even parts of Sweden. However, the reason for their existence as a religious military order was rather undercut by the first union between Poland and Lithuania at the start of the rise to prominence of the Polish Jagiello dynasty. With that Lithuania became as firmly Christian as Poland and the Teutonic Knights were left with little to do. When the Poles and Lithuanians joined in attacking the order the Teutonic Knights suffered a terrible reverse (the battle of Tannenburg). Their capitol of Marienburg was besieged but successfully defended, nonetheless, the war was a devastating blow to the power and prestige of the order. Later, after the Protestant revolt, the Grand Master Albert of Brandenburg converted to Lutheranism in 1525 and he secularized the Order at which time his uncle, King Sigismund I of Poland, gave him control of the territory of the Teutonic Knights as the Duke of Prussia. This, of course, later became the Kingdom of Prussia which never lost the warrior tradition it had inherited from the Teutonic Order. 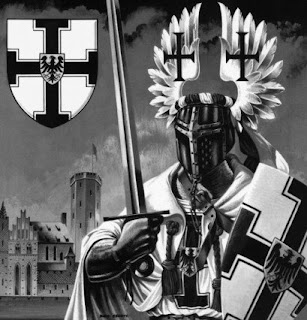 The Order of Teutonic Knights continued, of course, but it was never quite the same again. Over time, more and more lands were taken by other local rulers until the order was somewhat reorganized in 1531 under the Holy Roman Emperor Charles V after which a new headquarters was established in Wurttemberg. Protestants gained control of more and more of the lands of the Teutonic Order to the point that it existed almost in name only until it was finally abolished in 1809 by Napoleon Bonaparte who confiscated whatever was left. Some Teutonic Knights remained of course, mostly in Austria and the House of Hapsburg took control of the nominal leadership of the order and it continues to this day but only as a purely religious order with nothing other than the faith of the Catholic Church to connect it to those original warrior-monks who had fought off the pagan tribes of northern Europe on the frontier of Christendom. Nonetheless, they left a lasting legacy of which traces remain to this day in both the Christian presence that remains in the region of the old lands of the Order and in the symbols, colors and warrior traditions of many of the German people, growing out of the Kingdom of Prussia, prior to which was the Duchy of Prussia, prior to which had been the Order of the Teutonic Knights.
Posted by MadMonarchist at 12:13 AM