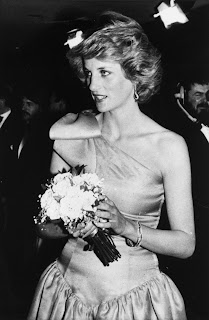 This week, the royal news that grabbed the headlines more than any other was yet another of the tired, disgraceful conspiracy theories concerning the death of Princess Diana. Never letting a total lack of evidence get in the way of a good, traumatic story, the media ran with what should have been dismissed immediately as an obvious lie. Unfortunately, the media was given cover by the fact that the British police made a statement that they were looking into the matter. This allowed all of the scandal-hungry talking heads to blather on and on about it because, after all, if the police are taking it seriously then maybe there might be some truth to it. Spare me. Simply the source of the new “information” should have been enough to discount it from the outset. It all comes down to the in-laws of a former British soldier. During a rather messy divorce they suddenly remembered, all these many years after the fact, that this soldier once boasted that the death of Princess Diana had all been arranged and that the British special forces carried it out. Did he really say such a thing? Who knows? How drunk was he at the time if he had? Who knows? Yet, for some reason that escapes me the authorities said they would look into these obviously ridiculous allegations and that gave a green flag to the media to run wild with the story and bring up all the old conspiracy theories just for good measure.

I am sure everyone has heard at least some of these stories, one of the most popular themes being that Princess Diana was pregnant with Dodi Al-Fayed’s baby and that the Royal Family (sometimes HRH the Duke of Edinburgh is singled out) had Mi6 or the SAS kill her off to avoid a scandal. Yeah, because a scandal involving Diana would have been unthinkable. Unfortunately, this whole tidal wave of conspiracy theories was partly supported by Dodi’s father, Mohamed Al-Fayed who, as far as I am concerned, is scum of the lowest order. Fabulously wealthy scum, but scum nonetheless. He seems to be to be someone who was able to buy his way to the top of society but became bitter because he could never buy his way up to the level of the royals and so petulantly decided to wage his own propaganda war against the monarchy. The people who spread these wild stories or give them any time at all are deluded at best and treasonous at worst. Contrary to what many think, they are no real friends or admirers of Princess Diana either. They are doing her memory no favors and are besmirching the good name of both the Royal Family and the British armed forces in the process.

On that subject, let me say that I have not been a big fan of Princess Diana ever since she decided to go public with her marital problems. Before that, I had a favorable view of her. What she did was wrong and it does not matter to me in the least that the Prince of Wales was doing wrong as well or who did wrong first. I am certainly not saying the Prince was or is or should be free from all blame but what should have been a private, family trauma was made into a public scandal by Diana and that I do not approve of. What was going through her mind, no one can say. However, it allowed many people to use her situation as a way to further their own agendas and to attack the monarchy. I was further turned off by the long-running hero worship of Diana and the way so many seized on her as the one “pure” royal who was being mistreated by the “wicked” forces of the monarchy. She is not the only royal figure to have ever become the focus of such sentiments and, sadly, she will probably not be the last. In life and now in death Princess Diana is being used by unscrupulous people as a tool with which to attack the foundational institution of the United Kingdom and its commonwealths. Regardless of what these people may think, they are no true friends or admirers of the late Princess.

Having given my opinion of Diana, let me also say that I do not hold the anger against her that some others do. I was genuinely sad at her untimely death and I applaud her for the good work she did throughout her life. She made mistakes and did plenty that I disapprove of but it also cannot be denied that she also did a great deal of good for a great many people around the world. Those, however, who used and who continue to use her memory as a way of attacking the monarchy are doing Diana no favors. They certainly have not the slightest care or compassion for the only thing left of her in this world, namely her children. Imagine how completely horrible it must be to have tabloids and talking heads pattering on about the idea that your grandfather had your mother killed. It is unspeakably atrocious and even less than that, just the effort to draw divisions within the personal lives of Princes William and Harry between their mother and father, their mother and grandparents, all people they love as much as any other person loves their own parents and grandparents. These stupid, ignorant stories and allegations do no one any good, they only harm and hurt. The only people who benefit are those who manage to enrich themselves at the expense of the ignorant and gullible.

There should be no doubt about this. Princess Diana was killed primarily because she was traveling in a car being driven by a man who was dangerously intoxicated, more than three times over the legal limit. More than anything else, even more than the rightfully despised paparazzi (who certainly played a part), the tragedy was the fault of a drunk driver. It is sad, it is unfortunate, but it happens to people every day all over the world. That should be the end of it and I hope, I really, sincerely hope, that one day Princess Diana will be allowed to rest in peace and that her children will not have to keep being traumatized by these ridiculous and hateful tales from the media.
Posted by MadMonarchist at 12:11 AM