Denmark in the Napoleonic Wars 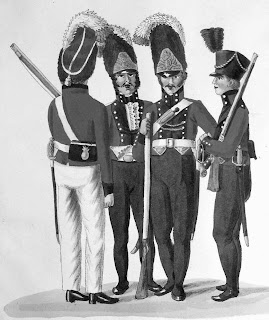 The French Revolution and Napoleonic Wars occurred during the reign of King Christian VII of Denmark (and Norway) who, unfortunately, seems to have been stark, raving mad. Because of his incapacity, the Crown Prince (later King Frederick VI) had more influence as did Andreas Bernstorff who managed foreign affairs from 1773-1778 and 1784-1797. Earlier, the King’s physician, Johann Friedrich Struensee, held considerable influence and set Denmark on a very liberal, progressive course. This moved Denmark so far to the left of the political spectrum that when the French Revolution broke out, other European powers worried that the disease of Jacobinism might have already taken hold of Denmark. However, Russia still had a great deal of influence in Scandinavia at that time and Tsar Paul I helped to push Denmark a little more to the right in 1799. Yet, it was the close relationship with the Tsar of Russia that ultimately brought down an Allied attack on Denmark. It was at Russian insistence that the Kingdom of Denmark joined the second “Armed Neutrality” groups that endeavored to stop all trade with Great Britain. Sweden and Prussia also joined as this was after the Tsar had fallen out with Britain over their conduct of the war against France. The British were not prepared to tolerate this and soon took military action against Denmark with a raid against the powerful Danish fleet at Copenhagen.

In April 1801 a British fleet commanded by the great Admiral Horatio Nelson sailed to Copenhagen and devastated the Danish fleet led by Admiral Olfert Fischer. It was a victory for Britain that ultimately took Denmark out of the league of Armed Neutrality, however, while a Danish defeat, it was a glorious one nonetheless. The Danes had offered heroic and determined resistance against incredible odds and Lord Nelson himself later admitted that the battle against the Danes had been the most fiercely fought battle of his entire naval career. The Kingdom of Denmark could still hold its head high. With the death of Tsar Paul the international situation changed and though the peace enforced by Britain was not a very beneficial one for Denmark, things were set to get worse. The Kingdom of Denmark was obliged to remain neutral until 1807 when, again, Britain moved against Denmark. The British were determined to take over the Danish fleet for fear that Napoleon might conquer Denmark and grab the valuable warships himself. British and German troops came in and besieged Copenhagen, led by General Arthur Wellesley (later the Duke of Wellington) after brushing aside a small force of Danish militia.

General Ernst Peymann commanded the defending Danish troops while at sea a British fleet under Admiral James Gambier pressed in to close the ring. The Danes refused the British summons to surrender and Gambier began to bombard Copenhagen. Some 2,000 civilians were killed before General Peymann agreed to surrender. The British demanded that all Danish naval forces be turned over to them, which was agreed to, though Crown Prince Frederick secretly ordered Paymann to have all the ships burned. This, however, was not done and the Danish fleet passed into the hands of the British. One can certainly understand the concern of Great Britain over the possibility of the French being able to turn the powerful Danish navy against them but the whole episode was an unfortunate affair. The Danes really had no great love for Napoleon and had intended to resist the French like most everyone else in Europe. However, the British attack on Copenhagen and the seizure of their proud fleet soured all feelings against Britain. The Kingdom of Denmark, therefore, entered into an alliance with Imperial France under King Frederick VI who came to the Danish throne in 1808.

Danish forces saw rather limited action in the ensuing period of warfare, restricted mostly to supporting the French and French-aligned forces in northern Germany. For a time though, with the many brilliant victories of Napoleon, it seemed that King Frederick VI might have backed the right horse and Danish power and influence would be on the rise. Very early in his reign it seemed that the Kingdom of Sweden would soon be in need of a monarch and, as a descendent of the Swedish King Gustav I, Frederick VI thought he might have a chance of being elected King of Sweden as well as being King of Denmark and Norway. Were this to have happened, all of Scandinavia would have (once again) been united in the person of the King of Denmark. However, as we know, it did not come to pass as the Swedes chose another, actually King Frederick’s brother-in-law, before ultimately giving the throne to Marshal of France Bernadotte.

Coincidentally, it was Marshal Bernadotte who was to command the French invasion force against Denmark if the Danes had not gone to war against Britain. Effectively, both Britain and France had forced Denmark to choose one side over the other and the Danish government felt it had no choice but to choose France. As we know, they had picked the side that would ultimately lose. In retribution, when the war was over, Denmark was forced to hand Norway over to Sweden which had come in on the Allied side when Marshal Bernadotte turned on his former French master. That being said, it should be kept in mind that Norway had always been a distinct, separate kingdom in its own right. It only happened that, prior to the war, the King of Denmark had also been the King of Norway while after the war the King of Sweden would also be the King of Norway which remained a separate, legal entity. Although Denmark would eventually recover, the loss of the Danish fleet and the loss of Norway had a fairly devastating impact on Danish strength and the Danish economy. The status of Denmark would never quite be the same afterwards. Still, despite not being on the same level as France, Britain or Austria at the start of the war, the Kingdom of Denmark could not be discounted. The Danish army was small but determined and efficient with many highly professional officers. There was also the Norwegian contingent which, even in those days, had units of ski-born troops. Most significant though was the Danish navy which was quite formidable with 38 ships-of-the-line and a tenacity that was proven at Copenhagen.
Posted by MadMonarchist at 12:08 AM