Empire of the Danes 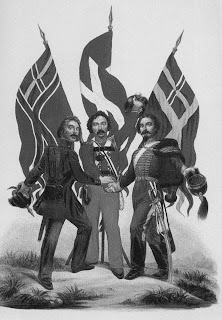 It may come as a surprise to some people that the Kingdom of Denmark was once an imperial power. Sure, today Denmark is just a quiet, unassuming little country in northern Europe, but, once upon a time, the Danes were large and in charge. Denmark managed to not only gain mastery of all of Scandinavia but also to branch out and establish colonial outposts all over the world. The history of Danish conquests goes back quite a long way, though the farther back one goes, naturally, the facts become a bit harder to nail down. However, it seems that King Harald Bluetooth who united the Danes and under whose reign Christianity was first introduced, managed to conquer southern Sweden and Norway, such as it was at the time. His son, King Sven Forkbeard took on the considerable task of conquering England, which was accomplished by 1014. Conquering England was difficult but still proved easier than ruling England and the Vikings of Denmark were eventually forced out with King St Canute IV being the last Danish monarch to attack English shores. England and Denmark went their separate ways by 1035 but, after a time, Denmark came roaring back to be a major contender for power in the Baltic Sea region with the Danes conquering parts of northern Germany and Estonia though only briefly.

Real prestige and what amounted to imperial power for Denmark came during the reign of Queen Margaret I. Through her marriage and offspring the Kalmar Union was formed which united all of Scandinavia under the Danish crown. Married to the King of Norway, who was also a relative of the soon to be late King of Sweden, and Sweden at that time ruling Finland, Queen Margaret I of Denmark was mistress of the whole of far northern Europe. On paper this was a political union and not a case of Norway, Sweden and Finland all being ruled by Denmark but (especially if you were to ask the Norwegians, Swedes and Finns at the time) it was the Danes who dominated and really called the shots. Well done Denmark, but, of course, this state of affairs was also partly why the Kalmar Union did not last for very long. The Swedes, traditionally a very independent people, proved to be the most discontented and the most formidable in seeing Danish influence pushed back inside their own borders. Sweden finally went its own separate way but Norway, while distinct from Denmark, remained solidly united under the Danish crown until the Napoleonic Wars when the Allies chastised Denmark for siding with France and took Norway away from the King of Denmark and gave it to the King of Sweden to offset the loss of Finland to the Tsar of Russia.

The religious disputes that followed the spread of Protestantism caused a setback for Danish power but new alliances were made and in time Denmark was back to being the most prosperous and powerful of the Scandinavian countries. They took a sting in the Thirty Years War and then a rather serious drubbing from Sweden. A number of subsequent wars failed to restore Danish supremacy over the region or to break Swedish power which grew considerably thanks to a number of very gifted military leaders. However, you cannot keep a good Dane down and in time Denmark was again a model of prosperity, confident enough to start looking beyond Europe for opportunities to grow. Thanks to the union with Norway the Danish Crown already held Iceland and Greenland as well as some other smaller islands in the North Sea but under King Christian IV, Denmark began looking to plant the oldest national flag in Europe on warmer shores. In 1620 the Kingdom of Denmark established its first official overseas colony in India, the subcontinent that was so attractive the Portuguese, Dutch, British and French were all competing to make claims. The Danish foothold was established at Tranquebar (now called Tharangambadi) which remained a Danish possession until 1845 when it was sold to Britain.

In 1671 the Danes gained their first colony in the New World with the acquisition of St Thomas island in the Caribbean, having first seized the island from the Dutch in 1666. Even before that though the Danish West India Company had an outpost there and after Danish rule became official and was extended over the whole island, development expanded rapidly. Sugar cane plantations were the primary industry as they also were on the island of St John (Sankt Jan) which was first settled by Danes in 1718. In 1733 the Danish West Indies were expanded further when Denmark purchased the island of Saint Croix from France. Of course, unpleasant as the subject is, sugar plantations in those days did not operate without widespread use of slave labor and if you were going to have sugar plantations in the Caribbean, and have them produce any profit, you were going to need slaves and this necessitated Danish colonial expansion in Africa. In 1661 Denmark purchased a fortress or castle from the Swedes on the Gold Coast of West Africa and in the following years Danish influence in the region expanded. Denmark established several other forts in the area, mostly in what is now Ghana, and the region became unofficially known as the Danish Gold Coast. In fact, one former Danish fort, Ft Christiansborg, is still used today as the residence of the President of Ghana.

Efforts were made to establish plantations in Africa but these were not successful and eventually the interior was seized by African powers hostile to Denmark and as public sentiment was eventually turning against the idea of slavery the Kingdom of Denmark withdrew from Africa and sold its forts to Great Britain in 1850. They served no purpose by that time as the slave trade had long been mostly suppressed thanks to the British and in 1848 the Kingdom of Denmark abolished the use of slave labor. The Danes had already seen that slavery could prove detrimental to the masters as well as to the slaves when there was a massive slave rebellion on the island of St John, where African slaves outnumbers Danish colonists by 5 to 1, which was only suppressed with the help of France. However, though Denmark was congratulated for the abolition of slavery this also meant that most of the plantations in the Danish West Indies went out of business and the local economy went downhill fast. Rather than being self-sufficient or profitable, the islands became a drain on the Kingdom of Denmark. So, in 1916 (when the Danish economy itself was in trouble due to World War I) there was little regret when Denmark sold the islands to the United States who wanted to use them to establish naval bases to guard against those troublesome German submarines. The following year the former Danish West Indies became the U.S. Virgin Islands.

This really ended the Danish colonial empire though the Crown of Denmark still reigned over Greenland, Iceland and the Faroe Islands. Danish power had been on the decline for a while by that point, having lost territory to Prussia in 1864. Norway was lost to Sweden at the end of the Napoleonic Wars but in 1905 voted to break away from the Swedish Crown and reestablish its own monarchy, electing Prince Carl of Denmark to become King Haakon VII of Norway, so Danes could probably smile on that occasion. During World War II the Kingdom of Denmark was occupied by Nazi Germany (though Danish defiance rather spoiled the German wish to showcase Denmark as the ‘model protectorate’) and in 1944 Iceland took the opportunity to break away from the Danish Crown and become an independent republic. Under the circumstances there was practically nothing Denmark could do about it, especially as the Allies were supportive simply to secure their own influence on the island. The timing seemed disgraceful and any objective observer would say it was not necessary considering that Iceland had already become virtually independent by that time anyway with the establishment of the Kingdom of Iceland in 1918 in personal union with the Crown of Denmark. Not long after the war, in 1948, the Faroe Islands were granted almost complete autonomy. Still, the islands remain under the reign of the Danish monarch as does the massive island of Greenland which was granted home rule in 1979.

With Iceland going republican, Greenland and Faroe Islands remain the only vestiges of the Danish colonial empire and these are each self-governing, autonomous members of the “Danish Realm”. In fairness it should also be pointed out that these islands were originally Norwegian possessions which came under the Danish Crown during the union of Denmark and Norway via the Treaty of Kiel of 1814. However, unassuming as the Kingdom of Denmark may appear today, there was a time when the Danes were the dominant force in far north Europe and at various times the rule of the Danish monarchy stretched across Finland, Sweden, Norway, England, northern Germany, Latvia, the North Atlantic, down to the Caribbean Sea, the Gold Coast of Africa, southern India and as far east as the Nicobar Islands in the Sea of Bengal (sold to Britain in 1869). Although today the Danish colonial empire may not be as well remembered as the more extensive realms of other colonial powers, for a time it was one that had to be taken into account with the Danish flag flying over parts of America, Africa and Asia.

Posted by MadMonarchist at 12:55 AM