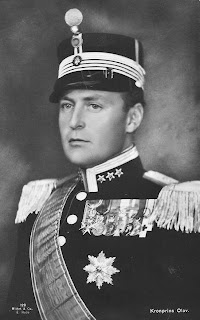 HRH Prince Alexander Edward Christian Frederik of Denmark was born on July 2, 1903 in Flitcham, England to Prince Carl of Denmark (younger son of King Frederick VIII of Denmark) and Princess Maud (daughter of the British King Edward VII). So, a Danish prince who would become King of Norway was born in England. Only a few years later his father was elected King of Norway, taking the name of Haakon VII. The Kingdom of Norway had previously been in a personal union with the Kingdom of Sweden and when total independence became the popular trend the Norwegian people were given a choice between a republic or a constitutional monarchy. They wisely opted for a monarchy and the choice of monarch fell on Prince Carl of Denmark; Norway having had a long history of close ties with Denmark prior to the union with Sweden. King Haakon VII, while taking the name of past Norwegian monarchs, gave his son the Norwegian name of Crown Prince Olav. Queen Maud, on the other hand, was British through and through and would always remain so but she certainly cared for her new country and saw to it that her son was raised to be totally Norwegian. That he certainly was as, coming to the country at such a young age, Norway was the only homeland he ever knew. 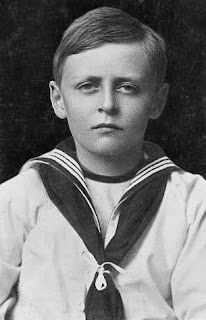 As he grew up, Crown Prince Olav decided not to follow in the footsteps of his very naval father and instead opted for the army as his national service. It proved to be a good choice as he was soon shown to be an exceptional soldier. After finishing school he attended the Norwegian Military Academy and graduated fourth in his class in 1924 after which he went on to study law and economics in Britain in preparation for his future role as monarch. He did not, however, neglect the navy and was an accomplished sailor as well, winning a gold medal in sailing at the 1928 Olympics in Amsterdam. He trained as a naval cadet and was also an avid skier, his mother encouraging him in the pursuit of that very Norwegian pastime. Crown Prince Olav advanced in rank in both the army and navy, participated in many athletic competitions and became very popular both for his achievements and his winning personality. When it came time to think about marriage he had little trouble there. In 1929, in a ceremony in Oslo he married his cousin Princess Martha of Sweden, a very striking young lady who quickly won over the Norwegian people.

Crown Prince Olav and Crown Princess Martha had a very happy and devoted marriage. The couple were alike in many ways; friendly, humble, approachable and compassionate. The pair were very down-to-earth with the Crown Princess making clothes for her children by hand. Those children were Princess Ragnhild, born in 1930; Princess Astrid, born in 1932 and finally the future King Harald V born in 1937. For Crown Prince Olav these were years of great happiness and contentment. Yet, there was also growing concern about the increasing belligerency of Germany to the south. By then a colonel in the Norwegian army, Crown Prince Olav was well aware of how unprepared Norway was for any military conflict. Despite the best efforts of the King, working behind the scenes, to increase Norwegian military preparedness, the political leaders of the country put their faith in neutrality as the only protection for the Kingdom of Norway. Because of the ties between the Royal Families, Norway was most adamant about not coming into conflict with Great Britain. However, as World War II spread, it became clear that Norwegian neutrality would be violated by either Britain or Germany. The only question was who would make the first move. 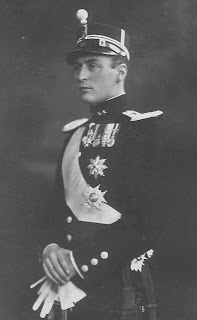 Crown Prince Olav was in a uniquely strong position for the coming crisis. Probably no one in the government was as well aware of Norwegian military capabilities as he was, having participated in military exercises as well as being well trained in the land and sea armed forces. The Crown Prince had also visited the United States and had already formed a friendship with American President Franklin D. Roosevelt. In 1939 he was promoted to the rank of general in the army and admiral in the navy. Things came to a head in 1940 when the British began putting into effect a plan for the invasion of Norway as a means of cutting off supplies from Scandinavia going to the Germans. However, after mining Norwegian waters, the British put off their invasion and Hitler seized the opportunity to launch his own attack, first on Denmark and then on Norway. The Danes were powerless to resist and, for the most part, didn’t and Denmark was occupied in one day. The conquest of Norway would take longer, one Norwegian remarking, “We are a longer country”.

When the Germans invaded, Crown Prince Olav stood firmly beside his father the King in a firm resolve to resist the attack as long as possible. He advised both civilian and military officials in reacting to the crisis and the Norwegian troops offered fierce resistance to the German attackers. The Germans hoped that the Norwegian Royal Family could be captured but the Norwegian royal guards offered heroic resistance to prevent this, earning the grudging respect of the Germans who nicknamed them the “black devils” because of their dark uniforms. Norway was conquered and occupied but the government and Royal Family were able to escape to Great Britain. Crown Prince Olav wanted to stay in Norway with his people but the government would not allow this and he went into exile as well. Still, the war was not over and the Crown Prince continued to assist the government-in-exile and the Norwegian troops who had been evacuated and the new Norwegian forces recruited in exile. He visited Norwegian forces in the UK, US and Canada during the war and earned the respect of the British and American military leadership for his talent and grasp of the situation. In 1944 he was made Chief of Defense for Norway and helped to coordinate with the Allies on any issue involving Norway or Norwegian forces. When victory came and Norway was liberated it was the Crown Prince who oversaw the disarmament of the German occupation army. 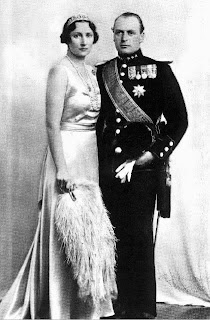 In the aftermath of World War II, Norway rebuilt and established closer ties with her Scandinavian neighbors partly due to increased concern over the Soviet Union. In 1957 there was immense public sadness when King Haakon VII passed away. He was the first independent King of Norway in modern times and was the one who led his people through their greatest crisis in memory, yet, his son was popular and respected enough to ensure that there was a smooth and confident transition. It was an extremely difficult and heartbreaking time for the new monarch. Not only had he lost his father but only a few years before his beloved wife, Crown Princess Martha, had died of cancer in 1954. An extremely talented and accomplished woman, she would be the greatest queen Norway never had. However, putting his own paid aside and putting duty first, the former Crown Prince became King Olav V and his was to be a more approachable style of monarchy. In no time at all Olav V became known as the “people’s king” because of his friendly and open attitude as well as his humility. He would drive his own car, in the public lanes along with everyone else, and go out without an escort. When questioned about this the King famously replied that the four million people of Norway were all his bodyguards. He carried out all of his constitutional duties meticulously and his winning personality gave Norway an advantage when it came to diplomatic relations with other countries. Everyone knew and respect King Olav. In the decades after his reign, Norway experienced an economic revival and increased prosperity, especially after the discovery and exploitation of the extensive oil resources of the country. Of course, measures were taken to protect the environment as well as King Olav V never lost his athletic nature or love of the outdoors.

As an example of that, in 1968 he won the Holmenkollen Medal, the highest Norwegian award for skiing skill. The King loved to ski and this led to another incident which showed both his love for the sport and his down-to-earth style. During the 1973 energy crisis travel was banned on certain weekends. The King did not want to miss a good ski weekend and, though as the King he certainly could have made himself an exception, to set a good example for the rest of his people he traveled on the train with everyone else. Throughout his reign he continued to support winter sports, sailing, scouting, international relations (he was the first Norwegian monarch to travel abroad extensively) and he kept up his interest in the military, never taking national security for granted. He always kept himself well informed on national issues and policy while strictly respecting the constitutional limits to his position. Olav V was, in every way, a model constitutional monarch, attentive to his duties and combining a deep sense of history with a great sense of humor. Admired by people of Norwegian descent around the world the King also supported charitable ethnic organizations of Norwegians living abroad. 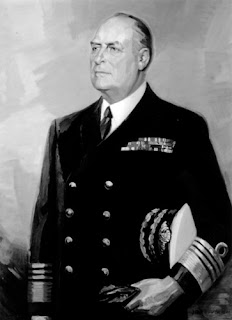 The first signs of possible health problems for King Olav V began to be noticed in 1989 and 1990. Because of his nature, however, he had long been seen as robust and invulnerable but time was taking a toll on the man who was, at the time, the oldest monarch in Europe. Late on January 17, 1991 King Olav V suffered a myocardial infarction and passed away, leaving the throne to his son King Harald V. The Kingdom of Norway mourned as it probably never had before for a King who was as loved as he was respected. With his military background, strength and grasp of world affairs, Olav V was a man to admire. Yet, at the same time, his winning personality made him more than just a father figure to his country but rather more like the friend of every Norwegian in the world.
Posted by MadMonarchist at 12:14 AM