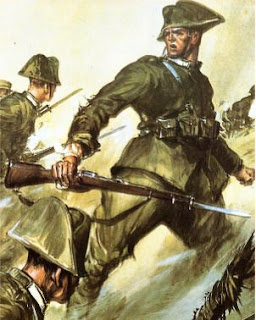 The Italian Royal Guard was formed from the famous Carabinieri Reali, the national, paramilitary police force of Italy, instantly recognizable by their lucerna tricorn hats, which they still wear to this day, though today only for ceremonial duties. The history of the Carabinieri can be traced back to King Victor Emmanuel I of Piedmont-Sardinia in 1814. Within this organization was the Carabinieri Guardie which was an elite corps of royal body guards who stood watch at the royal residence in Rome and which protected the King on his travels. Like most royal guard units they also served as an active military unit in the major conflicts undertaken by the Kingdom of Italy. In World War I, for example, a unit was sent to augment the British forces fighting in Palestine. In 1868 the Corazzieri or Cuirassiers’ Regiment was formed to provide a mounted escort for the King, first of Sardinia, later of Italy, and the first group was chosen from the Carabinieri to form a mounted escort on the occasion of the marriage of the future King Umberto I to Princess Margherita of Savoy. They would also protect the King while on military campaigns and were recognized as the official royal guard in 1870 as the Carabinieri Guardie del Re. The unit was reestablished in 1946 after the abolition of the monarchy, given a quick change of certain symbols and entrusted with the protection of the President of the Italian Republic. Members of these forces can still be seen, their appearance largely unchanged since the time of the monarchy, providing escorts and carrying out guard duty at the Quirinal Palace. Today they are part of the Italian military. 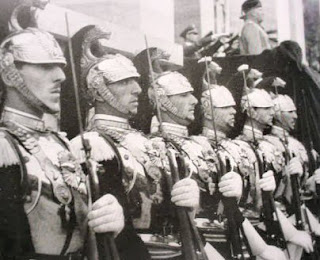 Today the Carabinieri and the Curassiers wear basically the same uniform they did in the time of the monarchy, only with the symbols of the House of Savoy replaced with republican insignia. 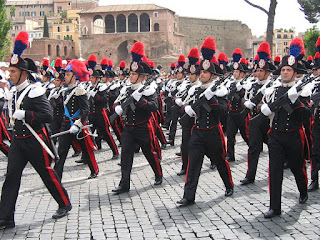 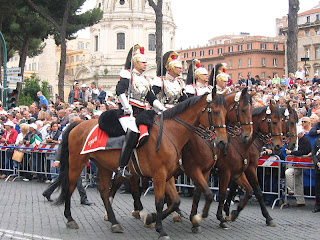 Posted by MadMonarchist at 9:23 AM