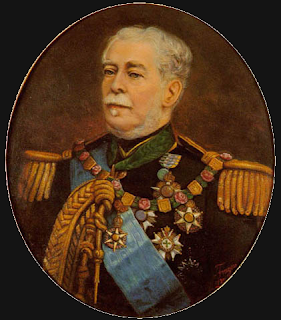 One of the great defenders of the Brazilian Empire was Luís Alves de Lima e Silva, Duke of Caxias. He was born on August 25, 1803 in the captaincy of Rio de Janeiro in a town now named Duque de Caxias in his honor. He came from a very old military tradition in his family and so it was no surprise when, as a teenager, he joined the Portuguese colonial army in Brazil. His family gained a place in the aristocracy for their service during the wars of expansion led by Portuguese King João VI which led to the annexation of Cisplatina (what is now Uruguay) and French Guiana. Luís Alves was only five-years old when he began his military education in 1808 as a cadet of the First Rio de Janeiro Infantry Regiment. He later went on to the military academy, taking additional classes than what was required but he dropped out in 1821 to join the First Fusilier Battalion in the movement for Brazilian independence from Portugal. In 1823 he was chosen by Emperor Pedro I of Brazil himself to be a member of his elite “Emperor’s Battalion”. He earned high praise for his courageous heroism in his successful attacks on Portuguese positions.

If there was any doubt about the monarchist fervor of Lima e Silva or his loyalty to his Emperor, such doubts were dispelled in 1831 when revolutionary riots broke out in Rio de Janeiro against Emperor Pedro I. Some military units mutinied and joined the rebels and Luís Alves’ own father was among them. He had danced with the dissidents before but had been forgiven by Dom Pedro I and even advanced by him for his past service but finally joined the rebellion against the Emperor. Dom Pedro I offered Luís Alves the position of commander of the loyal troops organizing to put down the rebellion and he willing accepted, putting his loyalty to his country and his sworn allegiance to his monarch above all. Later he distanced himself somewhat from the policies in question but nonetheless was not sorry for the course he took saying that as a loyal soldier of his Emperor, his first duty was to the Brazilian Empire. In the end, his father was chosen to sit on the regency council after Pedro I abdicated in favor of his young son Emperor Pedro II. When the regency reduced the Brazilian army in favor of the national militia and Luís Alves took a post in the Municipal Guard in Rio de Janeiro.

In 1833 Luís Alves de Lima e Silva married a daughter of the Brazilian aristocracy, the start of a long and happy marriage that would produce three children. He was also employed to teach the young Emperor horsemanship and how to handle a sword. The pupil-teacher relationship developed over time to a close personal friendship between the soldier and Dom Pedro II. The young Emperor admired him for his good manners, kindness and especially his honesty, always forthright with his true opinions rather than the flattery or deception that always came from the politicians. In his military role Luís Alves continued to keep busy combating the numerous minor rebellions and attempted coups that cropped up at regular intervals, which was far from uncommon at the time in Latin America. He restored law and order and was so successful that he was appointed President and military governor of Maranhão in the north of the country where rebellion and banditry had brought the region to the brink of anarchy. Luís Alves responded with his usual zeal and good sense and in time brought the area firmly under government control. In recognition of this victory the Emperor awarded him the title of Baron of Caxias.

Not long after returning from this campaign, fractious political squabbles led to an outbreak of rebellion in São Paulo and other areas in 1842. As ever, Caxias dutifully put down these challenges to the Emperor and law and order. At the same time civil war had broken out in Rio Grande do Sul as that area attempted to break away from Brazil over economic policies which they felt favored Uruguay and Argentina at their expense. This was also where the professional Italian revolutionary Garibaldi first saw combat as the conflagration spread. Eventually Caxias was sent in to settle things, which he did through a combination of military victories and compassionate outreach to bring about reconciliation. These rebels were republicans it is important to note and if anything the Empire was too lenient toward them but, thankfully, the crisis was ended.

In 1851 Caxias led a Brazilian military column into battle again in the Platine War, a climactic conflict between Brazil and Argentina and their respective allies over control of the River Plate region. His men entered Uruguay and occupied Montevideo. In the end, the independence of Uruguay and Paraguay were secured, Argentina was confined to its present borders, the Brazilian monarchy was strengthened and internal and external enemies were suppressed. The Empire of Brazil, as only one outcome of this conflict that was one of the most pivotal wars of South American history, became a proud beacon of stability and order at a time when countries all over Latin America (all of them republics) were stagnating as a result of numerous civil wars, breakdown in law and order and various shades of revolutionaries struggling for power. Brazil was spared all of this thank in part to the contributions of the Baron Caxias who was as adept at winning friends as he was defeating enemies.

Nonetheless, political disputes remained and when the liberals began to lose popular support the Emperor turned to Marquis Caxias (his title had been twice upgraded) to lead a new conservative government in 1861. Despite his best efforts, a coalition was worked out between the Liberals and the moderate conservatives that left Caxias and his government without a majority. He resigned his post but was quickly named Marshal of the Imperial Brazilian Army, the highest military rank next to the Emperor. Soon after, in 1864, Paraguay invaded Brazil (starting the War of the Triple Alliance) and Dom Pedro II rushed to the front with Caxias with him but also some of his liberal government ministers who were bitter enemies of the marquis. The marquis, a proud old man by this time, was offended when the Emperor listened to others over him. Nonetheless, in 1866 the Emperor appointed him to command all Brazilian forces in Paraguay. He led his forces to victory even as his enemies in the government constantly attacked him in the press. Despite his age, he led his troops in person with great courage and eventually the war was won for Brazil. For his meritorious service he was raised to the status of Duke of Caxias.

The Duke was later made President of the government again but his status was largely ceremonial. He was increasingly frail and infirm and dismayed at the growing liberalism of the Emperor and the liberal trend in society. He was greatly distressed by the stand-off between the Emperor and the Catholic Church over the crackdown on Freemasonry. Practically an invalid he retired to his farm and died on May 7, 1880, an ardent defender of Brazil and a loyal servant of his Emperor from first to last. He is still remembered today as a towering monarchist and the first great military hero of Brazil.
Posted by MadMonarchist at 10:21 AM