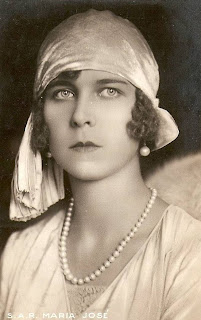 It is, sadly, nothing new for people to attack royals no longer on this earth to defend themselves but this one has to be one of the most disgusting and outrageous such attacks I have ever seen and, evidently, it is not completely new. That is the accusation that Queen Marie Jose of Italy had an affair with none other than "Il Duce" himself, Benito Mussolini. I admit, this shocks me to the core that anyone could be stupid enough to believe such an obvious lie. It would be unthinkable enough for the "May Queen" to have indulged in such behavior with anyone, as she was a very upright and principled person (praised by St Padre Pio for her good soul), but the idea that she could have ever had anything to do with Mussolini of all people frankly staggers the imagination. Of the entire Royal Family none more despised Mussolini than Marie Jose. Not only did she not find him in any way appealing, she was disgusted by him and actively worked, secretly of course, to thwart him. That is a well established fact, confirmed by her contacts with the Allies, via the Holy See, by which she tried to encourage the abandonment of the Rome-Berlin Axis and peace with the Allies. She had no respect or regard at all for Mussolini or his government.

It should also be added that the feeling was mutual. Mussolini was likewise never fond of the Royal Family and he particularly disliked Marie Jose (he even said he found her 'repulsive') and her husband, the future King Umberto II. Read anything about the war from pro-Fascist sources and you will see that they all regarded the Royal Family as troublesome at best or a threat at worst. They were constantly complaining that the palace was thwarting their efforts toward this or that end or that the royals and the aristocracy were too pro-British. Marie-Jose was often singled out and, in fact, she had got on the bad side of the dictator from the very start when she refused to have her name changed to the Italian version. OVRA (the Organizzazione per la Vigilanza e la Repressione dell'Antifascismo -the fascist secret police) kept a close watch on her and finally became sufficiently alarmed that Mussolini sent her out of Rome. Are these the actions of two people carryong on an affair? It is the most ridiculously absurd accusation one could imagine. Not only did the two come from different worlds in direct opposition to each other but of those from the 'world' of Queen Marie Jose, none were as adamantly opposed to Mussolini as she was, and this was known in Rome, London and Washington DC.

And what is the source? One mention from one of Mussolini's sons -that's it. Rumors and gossip, as always -rumors and gossip, the sort that can never be pinned down because they give no specifics and so can never be disproven to those who choose to believe them. The whole thing is so outrageous and ridiculous that I was hesitant to mention it, however, in this day and age lies spread like wild fire. I had a quick look over at that bastion of misinformation "Wikipedia" and, sure enough, it is already there, without a single source to back up even the accusation -to say nothing of any actual proof of what the Queen is being accused of. It is positively disgusting. And, evidently, this is not a new story, though I had never heard of it before. A salute to Monarchici in Rete for bringing this to my attention as this is just the sort of malicious lie that monarchists should work hard to refute.
Posted by MadMonarchist at 7:04 AM