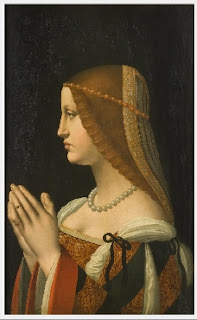 One of the fascinating figures in Polish history is Bona Sforza, as one might tell, not a Polish lady but an Italian one who by marriage became Queen of Poland and Grand Duchess of Lithuania and a consort that had quite an impact. Those familiar with the tumultuous political history of Renaissance Italy will recognize the Sforza family name, a powerhouse in Milan and a long-time force in Italian politics. As the rulers of Milan the Sforza family had at one time or another Lord Jean I of Monaco and Leonardo da Vinci and eventually had marriage times with numerous royal and papal families. Bona Sforza was born on February 2, 1494 the third child out of four of Gian Galeazzo Sforza (sixth Duke of Milan) and his wife Isabella of Naples (daughter of King Alfonso II) -thought by some to be the inspiration for the Mona Lisa. The real power at the time though was her great uncle Ludovico Sforza, a patron of the arts and Renaissance man responsible for starting the Italian Wars and who later got himself into a great deal of trouble with the King of France for trying to assassinate Jean II of Monaco. Despite such powerful family ties, Bona Sforza had a rather tragic youth, being the only one of her siblings to survive childhood.

For any high-born girl of her day the subject of marriage was never far away. However, the tendency of her great uncle to make enemies made it difficult for Isabella to secure a marriage alliance for her daughter. Ludovico had set himself against the Pope and the King of France so options in Italy, Spain or France were pretty scarce. However, he had, by the marriage of another niece, secured an alliance with the grand and powerful Hapsburg Holy Roman Emperor Maximilian I. It was the House of Hapsburg which helped arrange the marriage of Bona Sforza to another Austrian ally, the widowed King Sigismund I of Poland. She was about 24, not extremely young by the standards of the day, but her husband, known as “King Sigismund the Old” was 51. The two were married and Bona was crowned Queen of Poland in Krakow on April 18, 1518. The may have looked the odd couple; the delicate Milanese young lady and the rugged, bearded Polish king, but both were made of tough stuff and Bona was determined to succeed as Queen consort. She possessed admirable qualities for the job, having been taught by a member of the powerful Colonna family of the Roman nobility and she was perceptive, resourceful and never wasteful or frivolous.

The Queen built her own base of support, winning allies among the powerful Polish nobility and gaining favorable clerical appointments from the Medici Pope Leo X. Her position was also strengthened in 1524, when her mother died, as Bona became Princess of Rossano and Duchess of Bari in her own right as well as the holder of the Brienne claim to the Latin Kingdom of Jerusalem. She was also kept fairly busy in the bedroom and gave the King six children; 1 son and 4 daughters surviving. All went on to illustrious titles when they grew up; Queen Isabella of Hungary, King Sigismund II Augustus of Poland, Duchess Sophia of Brunswick-Lüneberg, Queen Anna I of Poland and Queen Catherine of Sweden, Duchess of Finland. As Queen of Poland she sought to support her husband who, like most Polish monarchs, was constantly having to fight to maintain his position. Frugal by nature, the rise of her own family in Italy had taught her that power comes from independence and independence comes from wealth. With that in mind she set herself to expanding the fortune of the Jagiellon dynasty as much as she could.

The mortgaged estates of the Polish Crown were redeemed but the nobility proved intransigent on submitting to permanent taxation or to a standing army which would have increased the power of the monarchy and been a help to the King in his constant struggles against Wallachia, the Russians and the Tatars. Making the Polish monarchy, and the Jagiellon dynasty, as strong as possible was the overriding goal of Queen Bona and the acquisition of new territories in Lithuania helped, gaining the King of Poland the additional title of Grand Duke of Lithuania from 1536-1546. This brought in a good deal of revenue but having more than one heir would have helped as well but this was not possible. The Queen lost her sixth child after falling off a horse and was never able to have any more children so securing the succession of her son Sigismund II Augustus was her top priority. The boy was created Grand Duke of Lithuania and finally crowned King of Poland in 1529 alongside his father which greatly upset some of the Polish nobles who demanded that no successor to the boy-king be chosen without their consent.

When it came to dealing with enemy nobles and foreign relations, Queen Bona was no push-over, this woman did come out of Renaissance Italy after all and she was not untouched by rumors of having some enemies poisoned, though, there is of course no evidence for such accusations. On the European stage, despite them being responsible for her marriage, the Queen opposed the Hapsburgs and favored an alliance with France. She viewed the Hapsburgs as a threat to Poland and was willing to be friendly with any power that would keep their attention elsewhere. So, she supported the Hungarians against the Hapsburgs and even corresponded with the famous Roxelana, wife of the Ottoman Sultan Suleiman the Magnificent. She offered to give up the titles she had inherited from her mother in return for Silesia but the King opposed this and the negotiations collapsed. It was during this time that Protestantism began to arrive in Poland. The Teutonic Knights secularized but Prussia remained symbolically subordinate to the Polish King. Queen Bona took actions against Protestants for heresy but was not an intolerant person and had no problem with Protestant views being discussed. In any event, Protestantism was never able to take root in Poland.

Queen Bona did have some problems with her husband, clashing over a potential bride for the boy (a famously gorgeous Lithuanian Calvinist being the choice the Queen opposed) and his being sent to Lithuania which lessened her influence at court. However, that all came to an end in 1548 when King Sigismund died, leaving his son as sole King of Poland and Grand Duke of Lithuania. When his lovely Lithuanian consort, Queen Barbara, died many suspected the Queen mother of being involved since she had always opposed the marriage and it definitely led to an even cooler relationship between mother and son. The Queen finally retired to her Duchy of Bari where she died under somewhat suspicious circumstances on November 19, 1557.
Posted by MadMonarchist at 12:29 AM