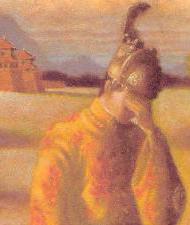 This morning I got a call from my old Dad asking, in a very matter of fact way, to come meet him over at our place just southeast of here. No more than that. Once I got there I found he had tangled with an old bull and, not surprisingly, the bull won. Tossed him in the air like a rag doll and broke his hip. I rushed him to the nearest half-way professional hospital (50 miles away) and spent most of the day there until my mother arrived. He's now in the big city waiting for surgery which should be sometime tonight, in a great deal of pain as you can imagine. When he was thrown up in the air his cell phone landed about 15 feet away from him and with his hip blown out he had to crawl over to get it, amongst about 40 cattle he had been feeding, then back again to get under the neck of the trailer in case the bull wanted to make another pass. I would appreciate any prayers or good thoughts sent his way for a safe and speedy recovery. Thanks.
Posted by MadMonarchist at 6:48 PM