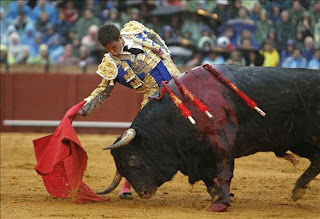 I have always thought that one can learn a great deal from watching a bull fight. You can even learn a great deal about republican politics from a bull fight. Consider this: imagine a traditional Spanish bullfight. The bull is rather like “the people”, strong, powerful, ignorant, easily annoyed and easily fooled. The matador and his assistants are rather like “the government”. They poke and prod and infuriate the beast (the people) with lances and darts we call taxes, regulations, limitations to your personal freedom and laws restricting your daily lives. The red cape is what we might call “democracy”, the brightly colored attractive looking thing that the government waves in front of the charging mob to distract them and direct their anger away from the government itself. In order to keep “the government” safe, “democracy” is always waved about as the answer to every problem, the thing we should blame for our injuries and yet also the answer to all of our problems. However, whenever the people charge toward it, “democracy” simply sweeps over them and disappears. But, eventually, “the people” become so weak, exhausted and submissive that they are no longer of any value. And we all know what happens then…

Just a word of friendly warning to all who put their faith in politicians from - The Mad Monarchist.
Posted by MadMonarchist at 6:08 PM