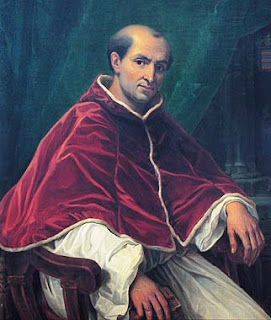 Pope Clement V is one of those historical figures who has gained a rather unsavory reputation that he does not entirely deserve. He will forever be remembered, with distaste, as the Pope he started what became known (first solely by the Italians) as the "Babylonian Captivity"; the era in which the Holy See moved from Rome to Avignon in southern France. This was a period of just over seventy years and although unfortunate it is understandable. Although it is easy to judge, we should keep in mind to what horrible depths the city of Rome had sunk by the time of the death of Pope Benedict XI in 1304. When the conclave elected Bertrand de Got, the Archbishop of Bordeaux (after an astounding 11 months) the new pontiff in fact never went to Rome at all, but immediately began searching for someplace more healthy, peaceful and secure from which to rule. His choice was ultimately the French city of Avignon, residing first in a Dominican monastery.

Another reason for the move was the on-going Hundred Years War between England and France which the Pope hoped to bring to an end. Given the subsequent actions of Clement V, it is understandable that he would be seen as partisan in this, but the facts are not so simple. As Archbishop of Bordeaux he had been an English subject, and throughout the infamous clash between the King of France and Pope Boniface VIII he had remained faithful to the Pope despite being friendly with Philip the Fair as the French king was called. Some could say he had bad omens from the start of his papacy. Crowned in Lyons with King Philip looking on, a crashing wall caused him to fall from his horse during the procession, his brother was killed and the papal tiara was destroyed. Nevertheless, by being present in France Clement V was bound to be influenced by King Philip.

The driving force behind the French monarchy was his thirst for vengeance against the late Pope Boniface VIII, which Clement tried to placate without dishonoring his papal predecessor. Nevertheless, Philip persisted, Clement tried to put him off by saying that only a formal council could rule on the actions of Boniface VIII, but the King refused to abandon his quest for long and eventually succeeded in brow-beating Clement into calling for a formal trial. The Pope reiterated his belief in the complete innocence of Boniface VIII, and eventually the difficulty of the trial process and Clement's pronouncements that France still held an honored place in the Church, assuring the dignity and authority of the King, seemed to bring the matter to a close. 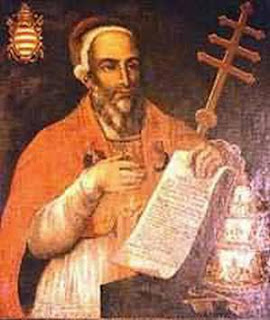 To be fair to Clement V, it must also be remembered that throughout this time he was suffering terrible pain from the cancer which would eventually take his life. This undoubtedly made Clement even weaker when dealing with the overbearing monarch. The biggest disaster and scandal of his reign however was over the suppression of the Knights Templar, again under pressure from King Philip. Long jealous of the power and prestige of the knights, the French arrested every Templar they could get their hands on, including their leader Jacques de Molay who had just submitted plans to Clement V for a new crusade. The knights confessed to a number of crimes under torture which Philip used to press the Church to take action against the Templars. The order was dragged through the legal mud until 1314, with no evidence sticking and the Pope was willing to simply give some penance and let the matter drop, but again Philip refused to relent. He pressed on in persecuting the order until Clement V finally buckled under pressure and ordered the Templars to be dissolved in 1312 after the Council of Vienne. The Pope tried to ensure their property when to other military orders, but most was ultimately taken by the French anyway. Clement V has thus been saddled with the reputation of a puppet-pope.

However, considering the circumstances around him, this is mostly unfair and in other matters Clement showed himself willing to stand up to the secular powers. He nominated Henry of Luxembourg to be Holy Roman Emperor and re-emphasized Papal Supremacy over the Emperor in Pastoralis cura. He also founded a number of universities, encouraged learning and earned quite a bit of displeasure from Scotland when he excommunicated their hero Robert the Bruce for his role in the murder of John Comyn during mass. It is, therefore, easy to see that Pope Clement V was an upright man, who understood and applied the full authority of the Papacy when it was at all possible. Even when dealing with the French king, under whose thumb he rested, he tried his best every time to divert and discourage or at least soften the blow of his demands. He died on April 20, 1314 at Roquemaure after reigning for 8 years, 10 months and 14 days.
Posted by MadMonarchist at 9:48 AM