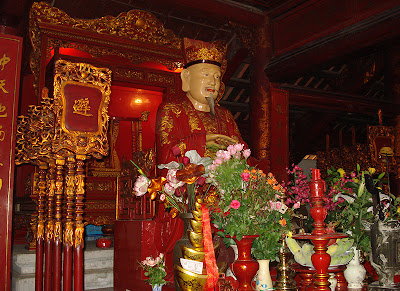 Today is the official day of celebration to mark the birthday of the “Great Sage” and teacher Confucius. Today, and this is a sign that the revolutionaries have become the establishment, the Communist government in Peking (which would really rather not talk too much about Mao and the “Cultural Revolution” these days) has officially rehabilitated Confucius and is extending official endorsement to his teachings. I would assume this is mostly an effort to encourage loyalty and obedience from a long-established Chinese source. However, make no mistake about it, Confucius would be appalled by the current regime, he was a monarchist through and through. His teachings about the five relationships, honesty, sincerity, virtue and leading by example on the part of the benevolent emperor had a lasting impact on China, Korea, Vietnam, Japan and other neighboring countries to varying degrees. His philosophy was the backbone of the imperial system in China, Korea and Vietnam before it was destroyed by the revolutionaries (inspired by communist and non-communist western philosophies) which has resulted in a Far East dominated by corrupt dictatorships. Even in his own time, Confucius was clear that his teachings were no innovation but simply an effort to restore and pass on values that were old even in his own time. The principles he emphasized, most famously “do not do to others what you would not wish done to yourself” have many parallels in the traditional, pre-revolutionary values of the west which goes to show that to a large degree what is “right” is right and what is “wrong” is wrong no matter where in the world you go. I would welcome any rediscovery, any study and genuine understanding of the values of Confucius which could help, one day, foster the eventual restoration of the traditional imperial systems in East Asia.

(photo from the magnificent Temple of Literature in Hanoi, Vietnam)
Posted by MadMonarchist at 9:59 AM