Off Topic Tuesday: The Mier Expedition

The life of the Republic of Texas was seldom peaceful. The Mexican general turned dictator Antonio Lopez de Santa Anna held a considerable grudge after his humiliating defeat and capture at the battle of San Jacinto on April 21, 1836 and the Texans were just as determined to take and occupy the lands ceded to them by the Treaty of Velasco as the Mexicans were to retake all of Texas for themselves. A series of attacks and counterattacks ensued, especially under the aggressive Texas President Mirabeau B. Lamar. He organized the Santa Fe expedition which enraged the Mexican government and led to a massive counter invasion of Texas in 1842. Texas was hard pressed to defend itself with men and money for only a small army called upon to defend a country that sprawled from the Sabine River halfway to the Pacific Ocean and the Rio Grande halfway to Canada. Moreover, Santa Anna was once again ruling Mexico and he was determined to strike back. So it was that the French General Adrian Woll, with 1,400 Mexican troops marched north and occupied San Antonio on September 11, 1842.

As a colonel, Woll had been quartermaster general of the Mexican Army of Operations in Texas during the War for Independence. His advance came on the heels of an earlier foray north in March under General Rafael Vasquez which had prompted a Declaration of War from the Texas Congress.
However, Lamar was now out of office and Sam Houston was President of the Lone Star Republic and he refused to fight Mexico again. Nonetheless, when Woll took San Antonio, now the second time the city had been occupied, albeit briefly, since independence, the Texans responded with combative determination. A volunteer force of some 225 militia under Captain Nicholas Dawson and Captain Matthew Caldwell converged on the Alamo City. Dawson and his 52 men were intercepted by a Mexican force of some 400 soldiers at Salado Creek before they could join forces with Caldwell. Outnumbered and surrounded Dawson and his men made a gallant stand as they were cut to pieces by Mexican artillery. Although Dawson finally attempted to surrender, the Mexican cavalry charged in and slaughtered Dawson and 35 of his men. This became known as the Dawson Massacre and further enraged the Texans who, under Caldwell, managed to defeat the main Mexican army and send General Woll retreating back to Mexico as more Texan volunteers poured in. 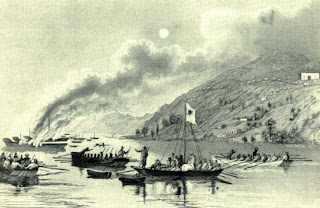 This time, the Texans were determined to respond and press on after their victory with or without government approval. Texas General Alexander Somervell and his troops launched a counteroffensive toward Laredo, taking the Gateway City and advancing into Mexico itself to capture Guerrero. However, General Woll was long gone and with no hope of catching up to the Mexican army, General Somervell abandoned the expedition on December 19, 1842 and returned to Texas before Mexican troops could converge on him. Yet, most of the rough and tumble Texans refused to go back. Some 189 followed Somervell back to Texas with around 300 staying behind, determined to continue the offensive under the leadership of William F. Fisher. A plan was devised, on the Texan side of the border, for an attack on the Mexican town of Mier. Fisher sent men out to infiltrate the area and report back and on Christmas day Fisher and 261 Texans attacked Mier, which was defended by General Pedro Ampudia.

The Texans were outnumbered 10 to 1 but proved to be more than a match for their enemies. In the firefight that ensued the Mexicans suffered 600 casualties while the Texans lost only about 30 men. Yet, despite their tenacity, the Texans were in an impossible position. Although they had won the battle, successful tactics cannot overcome a poor strategy. Alone in enemy country with no support, the Texans were soon out of food, water and ammunition. Ultimately, after talking with the Mexican commander, they agreed to surrender, but their troubles were far from over. They were marched to Camargo, then to Reynosa, then to Matamoras and then to Monterrey, all the while receiving the most brutal treatment. They were paraded before the local citizens to be mocked and insulted and were forced to eat dogs they captured along the way. 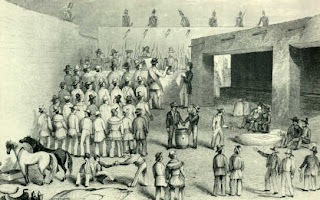 Unable to bear this captivity, at Hacienda Salado the Texans made an escape attempt. They rushed the guards, fought the remaining Mexicans over the arms that were stacked nearby with their bare hands and when these were taken the remaining soldiers fled in a panic. Five Texans had been killed, but they had taken all of the Mexicans guns, ammunition, horses and mules. However, they still had very little supplies and to avoid enemy patrols they avoided the main roads, dooming them to wander in a desolate wilderness. Privation forced them to begin eating their captured horses, but water was their most urgent need and many died of exhaustion and dehydration. They only finally found water when they accidentally stumbled into a Mexican army camp. Weakened almost to the point of death most were easily captured once again. About 13 managed to escape but of these, only 3 survived the brutal conditions in the desolate mountains. The rest were marched back to Hacienda Salado.

These 176 Texans faced a grim fate. President Santa Anna, who had never forgot his humiliation by the Texas army in 1836, ordered that all of them be put to death. Fortunately, this resulted in an outcry by the foreign envoys in Mexico and the Governor of Coahuila, Francisco Mexia, refused to obey the ghastly order. So, Santa Anna modified his decision, at least somewhat, and ordered every tenth man to be executed and the rest would be spared. To determine who would live and who would die, the Texans were to draw beans from a pot. A white bean meant life and a black bean meant death. Colonel Dominic Huerta, the Texans' jailer, chained them in pairs and blindfolded them. The officers were to draw first and there was no officer the Mexicans wanted dead more than the Scottish Texan Captain Ewan Cameron. It was no wonder why. 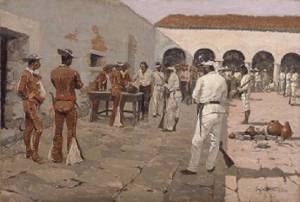 At the battle of Mier, Cameron had emptied a number of rifles into the charging Mexicans, then held them off by throwing rocks until he could reload. He had urged the Texans to fight on as long as possible and was the last to give up, breaking his sword rather than surrendering it to the enemy. To ensure his quick demise the Mexicans put the black beans on top and forced Captain Cameron to draw first. However, some of his men guessed the trick and told Cameron, "Dig deep Captain!" He did so, and to the disappointment of the Mexicans, drew a white bean. The rest drew their beans in alphabetical order. When a black bean was drawn, the Mexicans would mockingly comment, "better luck next time". One of the last to draw was the legendary Texas Ranger Bigfoot Wallace. He thought the black beans were a little larger than the white ones and felt a couple before picking the smaller of the two. Fortunately for him, it was white.

All those who drew black beans were to be shot the following morning. One of them was Henry Whalen who accepted his fate with defiance saying, "Well, they don't make much off me, anyhow, for I know I have killed 25 of the yellow-bellies". He also asked for a substantial last meal with the comment, "I do not wish to starve and be shot too". To the surprise of many, the Mexicans agreed and gave him a double ration. Then, at 6:30 in the evening of March 25, 1843 nine of the Texans were chained together and shot. After them, the final eight were also massacred in the same way. The executions lasted only 11 minutes but Henry Whalen had to be shot 15 times before he finally died. James L. Shepherd, who was only 17 years old, had been wounded but pretended to be dead until he had a chance to escape. Sadly, he was recaptured at Saltillo three days later and shot. In their thirst for vengeance the rules of the executions were not enough to save Captain Cameron either. Despite drawing a white bean, after the remaining prisoners began the march to Mexico City the brave Texan was shot on the morning of March 25 at Huehuetoca on orders from President Santa Anna. 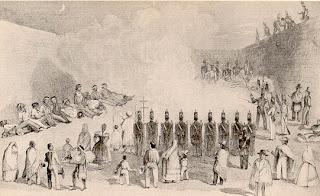 Once in Mexico City, the Texans were used as forced labor to build a road to Santa Anna's palace. The dictator took great delight in tormenting Texas President Sam Houston, the man who had beaten him at San Jacinto, by promising to return the prisoners on a number of occasions only to go back on his word every time. Liberation did not come until September 12, 1844 when Santa Anna ordered their release. Of the 261 Texans that had fought at Mier, 84 died, 35 escaped and 142 were left alive to be returned home. Three of those who made it back were Thomas Jefferson Green, who became a major general in the California militia after the Mexican-American War and Bigfoot Wallace and Samuel Walker who both became living legends in the Texas Rangers.

During the Mexican-American War, Texas troops found the graves of their comrades at Hacienda Salado and returned them to Texas after the war. The bodies of those killed in the Dawson Massacre were moved with them to LaGrange where, on September 18, 1848, the sixth anniversary of the Dawson Massacre, they were buried with full military honors with numerous dignitaries, including Sam Houston, looking on. The Mier Expedition and the subsequent black bean incident have been remembered by Texans ever since as an example of Texas heroism and Mexican brutality along with the Dawson and Goliad Massacres and the desperate defense of the Alamo. May they never be forgotten.
Posted by MadMonarchist at 9:26 AM

Email ThisBlogThis!Share to TwitterShare to FacebookShare to Pinterest
Labels: texas