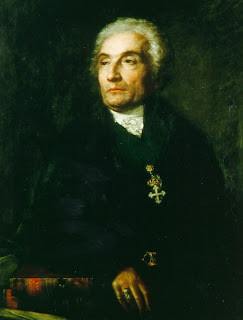 A personal favorite and surely one of the greatest scholarly monarchists of all time was Joseph Comte d'Maistre, a native of the Kingdom of Sardinia who became one of the great champions of counterrevolutionary thought. Seldom has there ever been so thoughtful and eloquent an advocate of religion and traditional authority. Born in 1753 his ethnic background was French but he served the King of Sardinia being a native of the Duchy of Savoy. His most prominent posts were as a minister to his own King and as an ambassador to the Imperial Russian court at St Petersburg. A product of Jesuit education, he seems to have toyed with some "enlightenment" ideas in his youth but quickly saw their folly and became one of the most outspoken intellectuals in Europe against the ideals of the so-called "Enlightenment" and all that it represented.

He did some of his best work on the French Revolution (which at one point forced him to flee his country) and he described the Reign of Terror (which swallowed revolutionaries as well as it progressed) as a sort of divine retribution for the crimes of the Revolution and the Enlightenment which he saw as the seed-bed of it all. For de Maistre it was the Enlightenment which was to blame, it was this movement which had turned people away from God and traditional authority and left them weak and open to the vague, utopian idealism of the revolutionaries. He advocated a strong aristocracy, a strong monarchy and a strong Church. He was a big believer in the goodness and the necessity of hierarchy and wrote what was, possibly, his masterpiece on the subject of the power and authority of the Pope. One could say that de Maistre was an ultramontane before ultramontanism was "cool". He described the Church as a monarchy with the Pope as its sovereign and that the absolute and infallible authority of the Pope was essential to maintaining the proper order in Christendom as a whole. He was unashamedly what one today might call a Catholic triumphalist.

De Maistre, however, was not simply a religious mystic. He argued for divinely-based monarchy on the grounds of practicality as well, though not to the extent that some others did. He has often been criticized for what might seem like an uncaring attitude toward evil and war and the like. However, this attitude was, in reality, d'Maistre being realistic. Knowing that this side of Heaven evil and war will never be eliminated he tried to show what higher purposes could be served by them. Evil existed in the world to create a sharp contrast with the goodness of God, making it somewhat easier for mankind to discern the narrow path to salvation. War was often a means of punishing the wicked and a sort of earth-bound purgatory as d'Maistre saw things. He had a huge impact on what was to be the future of counterrevolutionary conservatism across Europe and even stretching to other parts of the world.

If one wants to truly appreciate the greatness of the Comte d'Maistre one need only look at the quality of those enemies of his who he worked into an absolute frenzy. A prime example is that of Emile Faguet who called de Maistre, "a fierce absolutist, a furious theocrat, an intransigent legitimist, apostle of a monstrous trinity composed of Pope, King and Hangman, always and everywhere the champion of the hardest, narrowest and most inflexible dogmatism, a dark figure out of the Middle Ages, part learned doctor, part inquisitor, part executioner". Were I the count, I would take that as the greatest compliment.
Posted by MadMonarchist at 2:10 PM