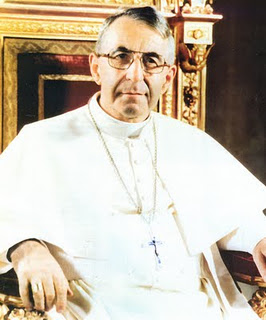 Albino Luciani was born on October 17, 1912 in Canale d'Agordo, Italy to Giovanni and Bortola Luciani. He was baptized by the midwife the same day as he was in danger of death, but the baptism was formalized by the Church two days later. Confirmed in the faith in 1919, he entered the minor seminary in Feltre in October of 1923. In 1935 he became, successively, a deacon and was ordained priest, starting his work at his home town of Canale d'Agordo before being given the rather unique job of teaching religious instruction to miners at the local Technical Institute for Miners. It may be difficult to imagine the smiling priest with the angelic voice teaching a bunch of rough, brawny miners, but he proved such a capable instructor that two years later he was teaching at the Gregorian Seminary in Belluno.

Over the next 10 years Father Luciani proved himself to be a highly intelligent and devout priest, earning a doctorate in Sacred Theology, the office of Secretary of the Diocesan Synod and the title of Monsignor. He was a renowned catechist and was praised by Angelo Cardinal Roncalli, who was later elected to the Holy See as Pope John XXIII. It was this pope who appointed Msgr. Luciani Bishop of Vittorio Veneto, Luciani was at first reluctant, but he finally agreed and was consecrated by Pope John on December 27, 1958 who advised him on the differences between being a teacher and being a shepherd, stressing the need for humility, which Luciani carried with him for the rest of his life. 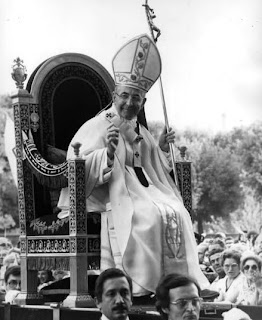 Bishop Luciani lived simply, plainly and austerely. He dressed as an ordinary priest, ate small meals, kept nothing of great value around him and drove an old car. When he was finally persuaded to accept a new one, he sold the old car and donated the money to the poor. He was an active and zealous bishop, building up his small diocese by improving the retreat center, the seminary and opening new churches and Catholic schools. He gave retreats for his priests as well as the laity, emphasizing the need for Christian charity, brotherhood and overcoming sin. He also had a great interest in the missions and "adopted" a diocese in Burundi, Africa. His warmth and humility won him the great affection of his people, yet he never hesitated to strictly uphold Church teaching and could be quite severe with those who disobeyed Church teaching. He also had a great love for the Holy Mother and pointed out that, "Our Lady became a saint without visions, without ecstasies. She became a saint as a simple housewife". Given that outlook, naturally he also was greatly devoted to the rosary.

His reputation grew high enough that in 1969 he was appointed to the See of Venice. On his way, he picked up some hitch-hikers who were worried about their new shepherd, and after talking to Bishop Luciani, unaware of who he was or why he was going to Venice, said, "We wish a priest like you would be made patriarch!". Bishop Luciani took possession of the Patriarchate of Venice in 1970. During his time there, Cardinal Luciani became known as a great speaker and a great writer. He was especially known for the letters he wrote to historical persons or fictional characters as a way of presenting moral lessons. Among those Cardinal Luciani wrote to in these letters (later collected into a book) were King David of Israel, King Lempel (from the book of Proverbs), the Austrian Empress Maria Theresa, the Tyrolean patriot Andreas Hofer and Jesus Himself. Cardinal Luciani proved an effective and popular Patriarch of Venice. Only 8 years later, Pope Paul VI died and the cardinals assembled in the Vatican to elect a new successor of St Peter. Of those considered likely candidates, the Patriarch of Venice was on few, if any, lists. Cardinal Luciani was not widely known, and at the start of the conclave, no candidate seemed to stand out. However, as vote after vote was taken, the votes for Luciani increased each time until, on the fourth vote on the first day, he was elected, taking the innovative name "Ioannes Paulus Primus" to recognize both of his predecessors John XXIII and Paul VI. 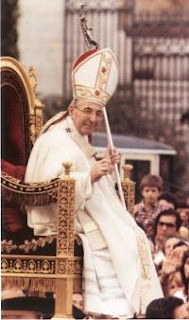 With Pope Paul VI having given up his tiara, Pope John Paul I went one step further and refused to have a coronation, instead marking his enthronement with receiving the pallium. He was the last Pope to be carried on the portable throne, which he had wanted to do away with but which was necessary so that people could see him. The reign of John Paul I also marked the first time that a Pontiff spoke of himself as “I” instead of using the royal “we” which had been the tradition for popes and monarchs. Not surprisingly, his papal motto was “humility”. Because of his cheerful manner John Paul I was also known, from the very beginning as, “the Smiling Pope”. Still, his election was not without some gasps. The visiting, controversial, Metropolitan of Leningrad (as it was then) fell dead during the proceedings and the newly elected Pontiff prayed over him in his final moments. Pope John Paul I announced that his reign would focus on carrying out the correct purposes of the Second Vatican Council and to hold firmly and clearly to the teachings of the Church. However, the world was not to see how Pope John Paul I would have carried out this agenda. After reigning for only 33 days Pope John Paul I died of a heart attack at 11pm on September 28, 1978. Although his papacy is among the shortest in history, the impact of his teaching is still being felt today and thanks to his faithful flock in northern Italy, the cause of Pope John Paul I is currently under investigation by the Congregation for the Causes of the Saints.
Posted by MadMonarchist at 12:46 AM