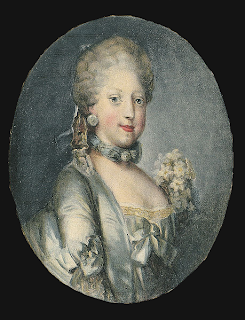 One royal consort who had a pretty rough time of it was Queen Caroline Matilda of Wales, consort of King Christian VII of Denmark and the daughter of HRH Frederick, Prince of Wales, the eldest son of King George II of Great Britain, Elector of Hanover. She was born at Leicester House in London on July 11, 1751, the youngest child of Prince Frederick and Princess Augusta of Saxe-Gotha. She was referred to as Princess and as Caroline Matilda of Wales even though by the time she was born the title of “Prince of Wales” had already passed to the future King George III. She was christened when she was ten days old by Thomas Hayter, Bishop of Norwich and her godparents were her aunt Princess Caroline, her sister Princess Augusta and her older brother the future George III. She was raised in a very strict fashion by her mother who kept her away from the squabbles at court and ensured that she had a good education. As a child she was known for being friendly, down-to-earth, a bit of a child of nature who loved the outdoors, riding horses and such things. She was also a very talented singer with a beautiful voice and was taught to speak German (of course), French and Italian.

Since their father had died only months before she was born, King George III was her dominant father-figure and took responsibility for seeing that his baby sister was brought up properly and, to her great misfortune, he quickly began seeking a suitable marriage for her. When she was only fifteen years old Princess Caroline Matilda was forced to say “goodbye” to England and sail off to Denmark to marry her cousin King Christian VII. Ordinarily this would be a happy occasion but, neither King George nor the teenage bride-to-be was aware of the sad fact that King Christian VII happened to almost completely insane. As a child he would simply sit and stare at his hands and as he grew older he became obsessed with his appearance, to the point of stripping down in public to admire his own physique and as time went on he only grew worse. On November 8, 1766 the two were married at Christiansborg Palace in Copenhagen and Caroline Matilda, then Queen consort of Denmark, noticed rather quickly that her husband was barking mad. She was positively enraged that she had been forced into such a union but, to her credit, she did not give up and run away back home. She braced herself and set about to do her duty.

It must have been oddly comical when her brother King George III wrote constantly inquiring about her as he was very anxious that the marriage would be a successful and fruitful one. All the while the King was getting up to all sorts of unspeakable acts, obsessing over masochism, threatening to kill himself or anyone around him in his violent ravings and quite displeased that he was expected to do the duties of a King. He had as little desire to do his duty as a husband, preferring the company of loose women to his wife, saying that it was unfashionable to sleep with your wife. Nonetheless, Queen Caroline Matilda had two children by Frederick, a son and heir to the throne, Prince Frederick, and a daughter Princess Louise Auguste. The Queen tried to make the best of her situation and was willing to play the part of regent of the Kingdom of Denmark, which was just as well for the King who did not want to be a sovereign anyway and was even rather thrilled by the idea of female domination. The courtiers were embarrassed and rather exasperated by his behavior but, like everyone else, struggled along as best they could.

She found the Danish court too strict for her liking and her friendly and charming nature was put to the test in the extreme in this environment and with such a husband. Once the succession was secured the King found his recreation in brothels and the Queen was kept largely isolated. When the King went on a tour of several cities in Europe in 1768 Queen Caroline Matilda got something of a vacation and shocked Danish sensibilities by walking around Copenhagen rather than being driven in a carriage. When the King finally returned he brought with him a doctor that was to be his personal physician named Johann Friedrich Struensee, a German doctor from Prussia. He had been able to do some good for the King and the reluctant monarch came to like and trust the man. He even managed to get the King to show some kindness to Queen Caroline Matilda but she knew it was Dr. Struensee who was behind it all. She admired the charming doctor and this admiration grew into affection. When he was given a room in the palace the temptation was too close to resist and by 1770 the Queen and the Prussian doctor were engaged in a full blown affair. Even when it became fairly common knowledge the King didn’t seem to care in the slightest (and honestly it would have been rather hypocritical for him to do so).

The Danish court and public were scandalized by this if the King was not and soon there were opposing parties consisting of the Queen and her paramour and their supporters and the opposition. Things might have gone on in that way as long as Christian VII lived but, as he became more and more incapacitated, Dr. Struensee effectively took over the government of Denmark and began ruling himself according to the fashion of the “Enlightened Despot” which he fancied himself as. Anger further mounted when the Queen gave birth to a baby girl, assumed by virtually everyone as being the child of Struensee. In January of 1772 the backlash erupted and the Queen and the doctor were arrested. She denied her relationship with Struensee in an effort to save him but it was to no avail. The King and Queen were declared divorced in April and Struensee and his chief accomplice were executed. King George III sent an envoy to obtain the release of his sister and the Danish authorities agreed and deported their former Queen to Hanover. Due to her behavior the King preferred not to have her back in England and she had little desire to go and even maintained some aspirations of returning to Denmark, deposing her ex-husband and ruling as regent through her son. However, nothing ever came of this plans and she died still in Germany of scarlet fever on May 10, 1775.
Posted by MadMonarchist at 12:20 AM