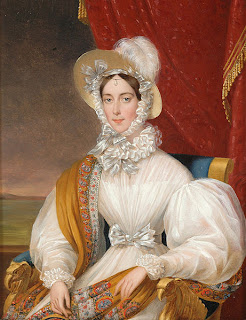 Amongst the consorts of the era of Imperial Austria there have been admirable and colorful women who made their mark. There was the pious Zita of Bourbon-Parma, the glamorous Elisabeth of Bavaria and Emperor Francis I had four spouses so they tend to get lost in the shuffle. One that is often overlooked but who is one of my favorites is Princess Maria Anna of Savoy, consort to the unfortunate Emperor Ferdinand I. She and her twin sister Maria Teresa were born on September 19, 1803 at the Palazzo Colonna in Rome to HM King Victor Emmanuel I of Piedmont-Sardinia and his consort Archduchess Maria Teresa of Austria-Este. Her full name was Princess Maria Anna Ricarda Carlotta Margherita Pia of Savoy. The little pair had the honor of being baptized by His Holiness Pope Pius VII as this was during the period when the Savoy royals had been driven out of Turin by the French and spent much of their time in Sardinia or in those parts of Italy not under French control. She grew into a very pretty girl, with the conservative nature of her father and also aware, because of her earliest years, of the dangers brought by those who wish to spread revolution.

Given her many charming qualities, it is remarkable she escaped marriage until she was 27 years old when, in an agreement between families, she was pledged to marry the heir to the Hapsburg thrones. For the princess, it was far from being a happy occasion. King Ferdinand V of Hungary (the highest title he held at the time) was an epileptic, suffered from water on the brain and a number of ailments that caused him to be somewhat (I stress somewhat) mentally deficient. The two were married by proxy in Turin on February 12, 1831 and later met in person to be married on February 27 in Vienna at the chapel of the Cardinal Archbishop of Olmütz. When the Princess first met her husband-to-be she reportedly could not look at him without crying. It was a first impression of course, and she did not know him at all, but he was certainly not the strong, handsome prince young girls dream of marrying. He had to be helped just to shuffle along, have names and information constantly repeated to him and was already become somewhat infirm. For a vibrant, beautiful young girl it could hardly be considered a happy occasion at first sight. However, the princess had been raised with a strong sense of duty and she dried her eyes, kept a stiff upper lip and took seriously her marriage vows to her husband. 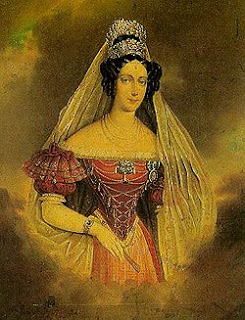 King Ferdinand V, of course, was unable to consummate the marriage (nor was he ever able to) and so the couple never had any children. He tried, but his frequently recurring epileptic fits would not permit it. Nonetheless, he loved his wife as best as he was able and Princess Maria Anna came to love him but from day one was totally devoted to her husband in every way. On March 2, 1835 Ferdinand succeeded to the throne as Emperor Ferdinand I of Austria and Maria Anna became Empress of Austria alongside him. On September 12 of the following year she also became Queen of Bohemia and was crowned in Prague. The Emperor needed constant assistance through all of his duties and his Empress was always right there beside him, sympathetic, devoted and faithful and the Emperor greatly appreciated her for that. Of course, it soon became clear that, even doing the best he could and with a great deal of support, the Austrian Empire was facing challenges which were beyond the abilities of someone so handicapped to cope with and that fact came home in a dramatic way with the Revolution of 1848.

Rebellions spread like wild fire across the Hapsburg domains and violence and rioting even broke out in Vienna itself. As the Imperial Family was forced to flee, the scene brought back memories and the stories of similar horrors told by her elders to Empress Maria Anna about the invasion of Piedmont by the French Revolutionaries that had forced her own family into exile before she was born. The Hapsburgs did not go into exile of course, but it was an extremely traumatic event for the Empress. The family came back to Vienna, with Maria Anna sitting beside the Emperor in their carriage, quietly weeping at the misfortune that had overtaken them. What was worse was that their return had been premature and they were soon forced to leave again in even greater haste with the younger Archdukes riding alongside the carriages, shielding those inside from the mobs screaming “death” with their own bodies. A great deal of history could have been quickly changed in the course of that frenzied flight. It was clear to all what had to be done, Emperor Ferdinand I must abdicate. He did so on December 2, 1848, reading out his act of abdication with some difficulty, passing the Crown to his nephew the new Emperor Francis Joseph. Empress Maria Anna, who retained her title, kissed her nephew and then accompanied her husband to mass after which they packed their bags and retired to private life. 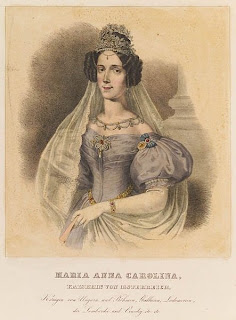 Ferdinand and Maria Anna spent the rest of their lives together in quiet, calm and spiritual pursuits, both of them being devoutly religious people. Freed of his imperial duties he was able to spend his time in his two favorite pursuits; eating and praying. Of course, for most of the time, Empress Maria Anna took on the role of a nurse more than a conventional wife. This, she did dutifully and with touching sincerity and devotion. She was tireless in her care and concern for her infirm husband. Many viewed her situation with sympathy or even pity but those who knew the couple best looked upon her with the greatest admiration for the loving care she took of the former Emperor. During the winters they lived at Prague Castle and in the summer moved to Reichstadt or Ploskovice (in what is now the Czech republic). The former Emperor died in 1875, mourned by his devoted wife who had served him so lovingly and faithfully for their many years together despite the many difficulties caused by his infirmities. When Empress Maria Anna herself departed this life on May 4, 1884 in Prague, she was buried next to her husband, to whom she had been as devoted as he was to her, in the Imperial Crypt in Vienna. She was an example to all of the best qualities of devotion to royal duty. She was obliged to take on a rather difficult and unenviable task, yet she devoted herself to that task and came to see it, not as a sacrifice to be endured, but a labor of love.
Posted by MadMonarchist at 12:11 AM