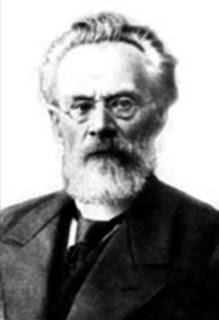 The Good Book says that God loves a sinner come to his senses and this aptly describes the life of the Russian monarchist and author Lev Alexandrovich Tikhomirov, an ardent revolutionary who later became one of the most zealous defenders of the Russian Orthodox monarchy. He was born in Gelendzhik on the Black Sea on January 19, 1852 to an officer in the Russian army medical corps and his high-born wife. His family was conservative and traditional for the time but not overly political. However, like so many unfortunate youths, his mind was corrupted by the fashionable left-wing radicalism that was sweeping through those chattering classes who considered themselves the “educated elite” of the time. He became one of the so-called Narodniks, a group of puffed-up middle class dissidents that arose after the emancipation of the serfs and who envisioned using the peasants to overthrow the monarchy, stamp out any creeping capitalism and establish a new socialist Russia free of monarchy, aristocracy and other elements they deemed as remnants of “feudalism”.

Tikhomirov’s dissident activities did not go unnoticed and in 1873 he was arrested for advocating subversive activity and sentenced to four years in Sts Peter and Paul Fortress in St Petersburg. His confinement and eventual release had little effect on him, if anything it was viewed as something of a right of passage in revolutionary circles and he climbed all the higher in the dissident hierarchy because of that. He became one of the leaders of “Land and Liberty” (part of the Narodniki) and in 1879 joined the terrorist group “The People’s Will”. During this time, the Narodniki had become increasingly radical and inclined toward violence. Their efforts to inspire the peasants to rise up and overthrow the monarchy had failed miserably. They blamed “superstition” on the part of their supposedly imbecilic countrymen. The truth was that the Russian peasants were deeply religious people who, according to the dictates of the Orthodox faith, viewed their Tsar as occupying a sacred place and they were devoutly loyal to their monarch who they lovingly referred to as “The Little Father”.

To combat this, which, again, the Narodniki viewed as mindless superstition, Tikhomirov and his fellow revolutionaries decided they would have to assassinate the Tsar in order to “prove” to the peasants that their “Little Father” was a mere mortal and this, they assumed, would break the faith of the peasantry and cause them to come flocking to their revolutionary banner. In this, these highly educated people displayed their own ignorance. The peasants were not well educated of course, but they were not stupid enough to actually believe the Tsar was immortal or impervious to harm. Yet, the revolutionaries convinced themselves that this was the case and so in 1882 carried out the brutal and gruesome assassination of Tsar Alexander II, the “Tsar Liberator”. Needless to say, the peasants did not rise up en masse in rebellion and Tsar Alexander III succeeded to the Russian throne, determined to rule with a much firmer hand than his more moderate father had. He brought down a world of hurt on the secret societies, terrorist gangs and assorted revolutionaries and Lev Tikhomirov, like many others, was forced to flee Russia.

The radical escaped to Switzerland and then moved on to France where he stayed for a number of years. Perhaps what he saw around him had some impact as well as the low place to which he had fallen. While many of his old comrades mindless stuck to their conspiracies, Tikhomirov actually stopped to think. He engaged in a little self-reflection and, the more he thought about what he had done and what his opinions were, the more he began to realize that he had made a terrible mistake. In 1886 he wrote, “From henceforth our only hope is Russia and the Russian people. We have nothing to gain from the revolutionaries…In light of this, I have begun to reconsider my life. I must now build it in such a way so as to serve Russia according to the dictates of my conscience, independent of all parties”.

Tikhomirov did reconsider and by 1888 he formally and publicly renounced his revolutionary activities. This is nothing to shrug off, he was putting his life in real danger by doing this; making himself a traitor to his former revolutionary comrades. However, he actually publishes a book explaining his change of heart called, “Why I Am No Longer a Revolutionary”. He also applied to return to the Russian Empire. Believe it or not, Tsar Alexander III, the man upheld by the revolutionaries as the archetype of the merciless, autocratic tyrant, accepts Tikhomirov’s change of heart as genuine and allows him to come home. Welcomed back with open in arms in fact and soon rising to become one of the leading conservative writers in the Russian Empire. His past was forgiven and forgotten and his contrition was heartfelt. As he later wrote in his memoirs, “I do not like my youth. It is full of the passioned desires of a corrupt heart, full of impurity, full of a stupid pride, a pride of someone who, while realizing his potential, has not yet matured to analytical thinking or independence of thought. I only begin to like my life from that point (in my last years in Paris) when I matured and was liberated…began to understand the meaning of life, began to seek God”.

Yes, as usual, along with becoming a monarchist came a conversion (or more accurately reversion) to his Orthodox Christian faith. In his writings he was able to put the wealth of his life experiences (much of it bad) to good use. He had seen the other side and he knew that where the revolutionary path would take his people and his country was no place anyone would want to be. From his years in France he had gained firsthand experience with democracy and republicanism, how political parties dominated the people and how the parties were manipulated by self-seeking elitists be they politicians or wealthy private citizens. He was certain that, while Russia had problems, democracy was most certainly not the answer. He wrote, “We must seek other ways, understanding that great truth, which is now apparent given the negative experiences of the “new era”: that organizing a society is only possible by keeping the spiritual balance in every man. And this spiritual balance comes from a living religious ideology”. He had come to grasp the heart of monarchism and the core of what is known as “traditional authority”.

Now an ardent monarchist, in 1905 Tikhomirov wrote a massive four-volume masterpiece that became the literary guide to Russian monarchists for years to come entitled, “On Monarchist Statehood”. In it he defended traditional authority as an absolutely essential part of any well ordered society in order to maintain that balance he spoke often of, but realizing that as the best “constitutions” (for lack of a better word) grow up naturally, also admitted that such a traditional authority would not be identical for every people in the world. In this work he wrote, “If a powerful moral ideal exists in a society, an ideal calling all to voluntary obedience to, and service of, one another, then it brings about monarchy because the existence of this ideal negates the need for physical force (democracy) or the rule of an elite (aristocracy). All that is necessary is the continual expression of this moral ideal. The most capable vehicle for this expression is one individual placed in a position of complete independence from all external political forces”.

By 1909 Tikhomirov had become editor of a state-owned monarchist newspaper, the “Moscow Gazette” though in 1913 government funding was cut and Tikhomirov resigned. He moved to Sergiev Posad and began writing “On the Religious and Philosophical Fundamentals of History” which would be his second-largest work. In this he went into detail about how he came to view the world, which he saw as being dominated by dualistic and monistic visions. The dualistic vision saw God and all that God created while the monistic vision saw only the material world and nothing more. He classified every epoch of history as the story of the struggle between these two competing visions and stated that it would go on until a final, apocalyptic clash between the forces of religion and the forces of revolution. Possibly by 1917?

Perhaps he was expecting it, but Lev Tikhomirov retired from addressing politics in 1917 and after the revolution and the establishment of the provisional government he took a job as a school secretary. He died still in Sergiev Posad on October 10, 1923.
Posted by MadMonarchist at 12:13 AM