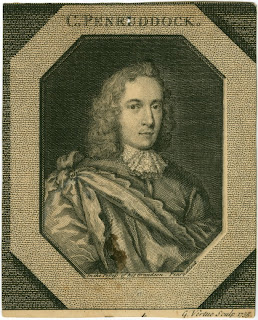 John Penruddock was an English royalist, most known for his leadership in a royalist uprising in 1655. The courage and loyalty of the cavaliers of the civil wars is fairly well known, but less well remembered are those brave and bold few who carried on the struggle during the years of tyranny under Oliver Cromwell. John Penruddock was born in 1619 and hailed from Compton Chamberlayne, a small village in Wiltshire near Salisbury. A loyal man, greatly attached to King and Country, had events not overtaken him there would surely be no mention of him in history. After reaching adulthood he married Arundel Freke, the daughter of John Freke, Esq. of Shrewton, Dorset and settled down to domestic life having two sons (George and Thomas) and four daughters (Elizabeth, Joan, Mary and Anne). In 1648, with the passing of his father, Sir John Penruddock of Compton Chamberlayne, the younger John inherited the family estate. By that time, of course, the first civil war had passed and the second was raging. John was firmly on the side of his King but, alas, it was not the side destined to win. King Charles I was treacherously executed and the military dictatorship of Oliver Cromwell was firmly set in place.

An ardent royalist, John Penruddock was a prominent member (though not one of the founders) of the monarchist secret society known as the Sealed Knot. The Sealed Knot worked clandestinely during the rule of Cromwell to bring about a restoration of the British monarchy. During the interregnum they made some eight attempts to bring down the Cromwellian regime and restore King Charles II to his rightful throne. Of these, the most famous was the Penruddock Uprising of 1655. Colonel John Penruddock was not the sole leader of the campaign, nor did he alone originate the plan for the rebellion but his part in the enterprise was the most comparatively successful and thus his name has gone down in history as that of the attempted rebellion as a whole.

The Sealed Knot planned to take key cities in England and instigate popular rebellions in other areas simultaneously after which, it was hoped, a general uprising would be sparked, Cromwell driven from power and the Stuart heir restored to the throne of his martyred father. The initial cities that were to be taken were Salisbury, Newcastle, York and Winchester with subsequent rebellions hopefully incited in Nottinghamshire and Cheshire. It was all supposed to happen in March of 1655. However, there was a snag before things had even gotten underway when more troops of the devastatingly effective “New Model Army” were sent to Winchester just before the uprising was to take place so efforts to secure that city had to be given up. Rattled by this setback, some people began to have second thoughts about their chances for success and when the call went out in Cheshire to rally for the Crown, no one came out. Those who did take to the field for the cause of their King were disheartened by how few they were. Even some of the leadership began to waver at what seemed to be a lost cause. One by one the groups disbanded and went home. Penruddock, and the group he was responsible for at Salisbury, however, did not.

Colonel Penruddock and Sir Joseph Wagstaffe gathered their fellow royalists, roughly three to four hundred men, and on March 11 marched in and occupied Salisbury, raising the Stuart Royal Standard. Despite a lack of success elsewhere, Penruddock was determined to go forward and on March 12 led his troops out of the city and marched west, passing through Blanford, Sherborne and Yeovil. He hoped to gather strength as he went but few volunteered. Even many who were sympathetic would not join a cause they judged doomed to defeat. On March 14 Penruddock and his little army arrived in South Molton in Devon where they were confronted by a horse troops of the New Model Army led by Captain Unton Crook. For three hours the royalists and roundheads fought in the streets before the superior training and professionalism of the New Model Army troops prevailed over the civilian volunteers of Penruddock. The royalist forces broke, many being killed, some managing to escape. Penruddock and the other leaders, however, were all taken by the parliamentary forces.

Immediately afterwards, Oliver Cromwell appointed Sir Hugh Wyndham as judge on a special commission to punish those responsible for the royalist uprising. As the primary leader of the effort, the fate of Colonel John Penruddock was never in doubt. He was executed, by beheading, at Exeter in May of 1655. The other leaders were beheaded as well with the remainder captured royalists being sold into slavery in the West Indies plantations. Still, his memory lived on as the leader of one of the few real domestic challenges to the rule of Cromwell and one of the more colorful episodes of the resistance during the interregnum. Control of the Penruddock family estates passed first to John’s eldest son George and upon his death in 1664 to his younger brother Thomas Penruddock who later served as a Member of Parliament for Wilton when the King enjoyed his own again.
Posted by MadMonarchist at 12:11 AM