One of the earlier Bishops of Rome, St Sixtus II was a Greek Christian, elected to the Throne of St Peter in August of 257 AD. Due to the persecutions Christians were suffering at that time, his consecration was done in secret. He reigned for only one year, but in that short time he left an example that has endured throughout history. The legacy that stands out the most from his pontificate is one of reconciliation and strengthening of the unity of the Catholic Church. During the previous pontificate of St Stephen I, a quarrel had broken out with Bishop Cyprian of Carthage in North Africa over the repentant followers of Novatian, an anti-pope who tried to usurp power from 251-258. Pope St Sixtus II managed to repair the relationship between the Bishop and the Papacy, as well as bringing back other churches that had broken away because of this dispute into full communion with Rome.

These actions displayed the wisdom and compassion of St Sixtus, but upcoming events would vividly illustrate his courage and devotion as well. In 253 AD Valerian became Emperor of Rome and soon instituted a massive persecution of Christians. Although praised for restoring some semblance of order in the east, Emperor Valerian fanatically believed that the erosion of Roman power was due to the anger of Rome's pagan gods over the presence of the Christians, who refused to worship their idols. The Emperor outlawed all liturgical worship and cut off access to the catacombs, where Christians were known to gather in times of danger. His record was so great that in the same year that Sixtus II became pope, Emperor Valerian was given the title, “Restorer of the World”. The Christian minority, however, certainly did not join in the praise as many were being put to death. 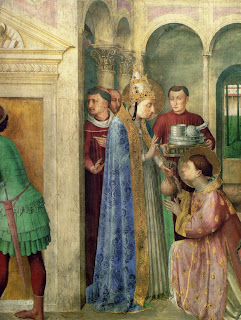 Naturally, the leader of the Christians, the Bishop of Rome, was a prime target. Valerian issued an imperial decree that all bishops, priests and deacons of the Christian religion were to be immediately put to death. However, Pope St Sixtus II continued to carry out his duties to God and the Church, disregarding the threat execution. On August 6, 258 the Pope was celebrating Mass in a chapel in the catacombs of Praetextatus, a Christian burial site also known as the cemetery of St Calixtus. Their only light was by candles, and voices were hushed as the Pope presided over the forbidden ceremony, calmly determined to give his life in obedience to Christ's command, "Do this in memory of Me".

As the Mass continued, the people forgot the danger they were in as Christ filled their hearts and minds. Suddenly though, the outside world came crashing in. The door was forced open and Roman troops, carrying torches overhead, filed into the small chapel. With soldiers blocking the door, their commander called out, "Give me your leaders or we will kill you all." Pope Sixtus II stepped forward, and calmly said, "I am the Bishop of Rome, let the rest of these people go." Just as he had spoken, the four deacons who had been assisting him in the Mass came forward and said, "We are deacons, we are also guilty of worshipping the true God." 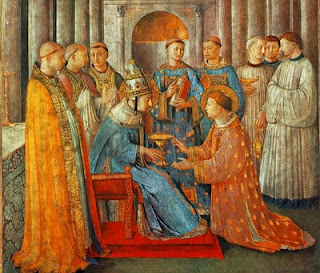 The Roman commander ordered the rest of the people to be taken out of the chapel and restrained the five leaders in front of him. Immediately they were forced to the ground as the soldiers drew their swords and decapitated each one. St Sixtus II was not the first or the last to be martyred in the persecutions of Emperor Valerian. Even Bishop Cyprian of Carthage was later put to death, along with many others. However, his death provided yet another heroic image for the early Church and gave heart to the Christians of Rome to continue to endure their suffering for the sake of God. It was the first major crisis of the kind the Church had faced since the death of Nero, and the strength of heart the Christians gained ensured that Christianity would endure the horrific persecutions. The same could not be said for Emperor Valerian. When Persia tried to invade Syria and Armenia Valerian rushed to the east with his armies to stop them. However, he suffered a stunning defeat, was taken into captivity and died a wretched prisoner of the Persian army.
Posted by MadMonarchist at 12:22 AM