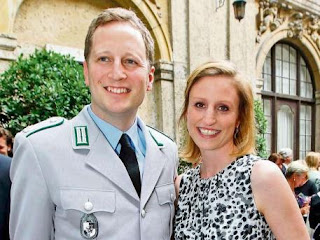 Today marks the anniversary of the death of Kaiser Wilhelm II, last German Emperor and King of Prussia, in his exile at House Doorn in the Netherlands. The Radical Royalist gives an in-depth report on the event and the last home of the fallen Prussian monarch. Prussian monarchists are also set to commemorate the upcoming anniversary of the House of Hohenzollern as well as the wedding of the heir to the former throne, Prince Georg Friedrich of Prussia (seen above with his bride-to-be), great-grandson of the last Kaiser.
Posted by MadMonarchist at 2:48 AM