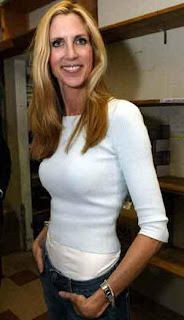 I know plenty of people will get uptight about my saying anything at all nice about Ann Coulter. "She's a republican!" True, but she has also said that a monarchy is not always bad -and coming from an American that's something at least. "She's a Neo-Con!" Maybe, I've heard so many people of such a variety called that as an insult that I'm not even sure what it's supposed to mean anymore. But, one thing I have always liked about Ann Coulter is that she infuriates all the right people. She has also done something I never thought anyone in "mainstream" political discourse would ever do: condemn the French Revolution. In her latest book, "Demonic: How the Liberal Mob is Endangering America", Miss Coulter does that and actually tells the TRUTH about the martyred Queen Marie Antoinette who has suffered more unjustly in the popular culture than just about any other royal figure. Now, I am not trying to paint a rosey picture here, she takes her swipe at the French monarchy too, no doubt about it, but she does speak of the Revolution as the true horror that it was and condemns past and present efforts to portray it as some sort of righteous crusade for liberty and freedom. She also relates how it resulted in the exact opposite and, as I said, she puts the lie to the many false rumors about Marie Antoinette.

I admit, I was surprised to see any American political commentator telling the truth about the Queen when even those who know the truth cannot pass up an opportunity to add to the popular misconception of her. In chapter six of her book, "The French Revolution: When Liberals Attack" She states that the Queen was not some cold woman, living in lavish luxury and delighting in the plight of the masses but rather compares her to Audrey Hepburn in Roman Holiday. She relates how the Queen was simple in her tastes, concerned about the poor and even broke down some of the class-structure rules at Versailles and invited poor children to the palace to have dinner with her own. She also makes clear that the Queen never said, "Let them eat cake" -a truth which cannot be repeated often enough. Miss Coulter also demolishes other popular misconceptions, such as the storming of the Bastille actually accomplishing anything or that liberty and freedom were actually the result of the Revolution and she spares no details in telling of the many and grotesque horrors visited upon France by the Revolutionaries.

Can I recommend her book? That would be a silly thing to do in speaking to a monarchist audience. I'm sure those inclined to agree with Ann will read it and those who are not will avoid it like the plague. I simply point it out and applaud her for telling the truth in this area of history where the lies have been so cemented in place over the centuries by republicans of every stripe.
Posted by MadMonarchist at 6:28 PM