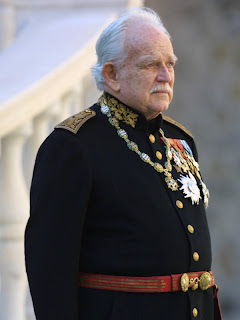 April 6 was the day in 2005 that HSH Prince Rainier III of Monaco departed this life. May 9th marked the anniversary of his inheriting the throne of Monaco from his grandfather Prince Louis II and May 31 was the anniversary of his birth in 1923 to Prince Pierre de Polignac and Princess Charlotte of Monaco. One of my favorite modern monarchs, Rainier III is a man most people know, but few seem to know much about. To remedy that, I thought it appropriate to highlight a couple of articles from my sub-blog Mad for Monaco.

Prince Rainier was a man of strong convictions and deep faith as related in Rainier III: A Man & Monarch of Integrity.

Prince Rainier was also the only modern monarch in western Europe to suspend the constitution and rule by decree in response to an economic and political effort to sideline him. Read about that in Onassis vs. Grimaldi.
Posted by MadMonarchist at 7:28 AM