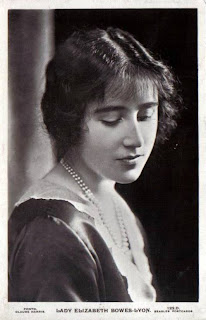 The late, beloved, Queen Mother of Great Britain, Elizabeth Bowes-Lyon, the last Queen-Empress of India, was born on August 4, 1900, the ninth of ten children born to the Earl of Strathmore and his wife Cecilia Cavendish-Bentinck. Her birth was registered in Hertfordshire though it is still a matter of dispute exactly where she was born. She grew up at Glamis Castle in Angus, Scotland. As a young girl she was known for her love of dogs, horses and outdoor sports -things she would later pass on to her daughter, the future Queen. During World War I the family castle took in wounded soldiers and the teenage Elizabeth helped care for them and keep the place running. Many of the BEF veterans who stayed there could not praise her care and kindness highly enough, for them, she was an absolute angel of mercy. It was after the war that she made the acquaintance of HRH Prince Albert, Duke of York. The Duke was soon smitten and his close friend Sir Louis Greig encouraged him to marry Elizabeth. In 1921 he popped the question, but Elizabeth turned him down. She was reluctant, as she said, “never again to be free to think, speak and act as I feel I really ought to”.

However, the Duke of York was adamant that he would have no other girl but Elizabeth Bowes-Lyon and Queen Mary, after meeting her, agreed. After Elizabeth appeared as a bridesmaid at the wedding of Albert’s sister Princess Mary in 1922 the Duke proposed again and, again, Elizabeth turned him down. However, in 1923 the persistent Duke proposed again and the third time was the charm. Elizabeth agreed and the couple were married on April 26 at Westminster Abbey with the new Duchess of York placing her wedding bouquet on the Tomb of the Unknown Warrior in an unplanned tribute, an act which has been repeated by every royal bride thereafter. Despite her hesitation in joining the Royal Family there was no doubt of the level of devotion that the new Duke and Duchess of York felt for each other. The two traveled extensively from Northern Ireland to Aden to Africa and in 1926 welcomed their first child into the world, HRH Princess Elizabeth, the future Queen. The Duchess of York was also a compassionate and comforting support to her husband as he worked to overcome his speech impediment as he was called upon to make more public speeches as part of his royal duties. 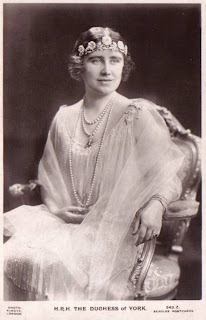 The Duchess Elizabeth was a very devoted and “hands-on” mother and when the York couple went on a visit to Australia and the Pacific islands she was extremely distraught over having to leave little Princess Elizabeth behind. However, she was a big hit at every venue they visited and proved to be a master of the little, unscripted gestures that won over hearts wherever she went such as when she was shaking hands with locals in Fiji. A dog wandered up amongst the group and, with a smile she shook the paw of the curious pup as well. In 1930 another daughter, Princess Margaret Rose, was born and the family settled into a happy routine. They were a close-knit group, supportive of each other and very comfortable in their secondary role. However, all of that was about to change when King George V died in 1936 and Albert’s older brother became King Edward VIII, surrounded by controversy from the very start over his on-going relationship with Wallis Simpson. After only a few months King Edward VIII decided to abdicate in order to marry Simpson and in December Prince Albert Duke of York became King George VI, his devoted wife being crowned alongside him.

There was some family tension over this, and the now Queen Elizabeth was understandably less than thrilled at her elevation. She had been reluctant enough to endure the scrutiny and pressure of marrying the younger royal son, now the abdication had made her husband King and herself Queen. The stress on the new King George VI was considerable and there was some feeling that it had been unfairly thrust upon him by a brother who put personal wishes before national duty. However, there would be none of that with the new King and Queen who were devoted to duty from start to finish. In the prelude to World War II, the King and Queen understandably wanted peace and to avoid conflict if at all possible. However, the Queen was not blind to the threat that Nazi Germany represented and, seeing her on television, Adolf Hitler famously called Queen Elizabeth, “the most dangerous woman in Europe”. When World War II came, King George and Queen Elizabeth embodied the motto “Keep Calm and Carry On”. King George focused on his duties as Commander-in-Chief, the Queen worked to comfort the public and maintain morale while Princess Elizabeth joined the Auxiliary Territorial Service. 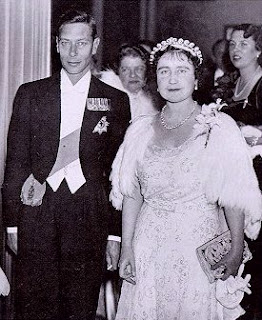 Queen Elizabeth was known for her ever present smile and her impeccable appearance. When visiting some victims of the London bombing by the German air force, an aide asked if she was not, perhaps, a bit over-dressed for visiting people in the ruins and rubble. The Queen gave him a stern look and replied that they would all wear their best if they were coming to see her so she could do no less to visit them. As she visited these people the Queen must have felt a bit of guilt that amongst so much suffering her home and family had remained relatively unscathed. That all changed though when Buckingham Palace itself was hit by German bombs and the Queen said that, in a way, she was glad. No one had been hurt and she said, after that, that she finally felt she could look the East End in the face, having experienced what so many of them had experienced. When the threat of a German invasion was at its height she even learned to use a pistol -just in case. The war was a terrible ordeal but it brought the British people and the Royal Family together as never before and the Queen was a big part of that.

Peace came as a relief but the stress had taken its toll on the King whose health deteriorated rapidly. The Queen was very protective of him and could be quite combative such as when she hit someone with her umbrella who she (mistakenly) thought was threatening the royal party. She was absolutely devastated when King George VI died in 1952 and, for a time, retired to Scotland, but was persuaded to return to public service out of her sense of duty and her wish to help her daughter, newly crowned Queen Elizabeth II. Known as HM Queen Elizabeth, the Queen Mother, she remained, easily, the most widely popular member of the Royal Family, both because of her charm and friendliness and also because of the history she represented, memories of World War II and her calm in times of crisis. Britain was going through drastic changes as the British Empire was dismantled and socialism was brought in. Someone asked the Queen Mother what it was like to be a “Queen-Empress” because, with the independence of India, she was the last to hold such a title. She replied that, “it was very nice while it lasted”. 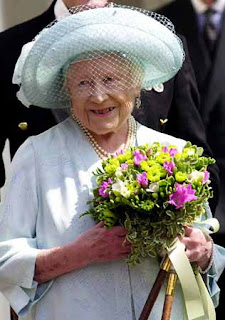 A supportive mother, a loving grandmother and a devoted public servant, the Queen Mother kept going even after turning 90 years old. She moved a little slower and her drinks got a little stronger but she kept on going, always with a smile, always setting just the right tone for every occasion. She suffered from a number of falls at home that slowed her down even more but even after turning 100 and breaking her pelvis in such a fall, she still insisted on standing for the national anthem at a service honoring King George VI -and she was over 101 years old. In 2002, to the great surprise of many, she attended the funeral of her younger daughter Princess Margaret but did not want anyone to see her since she was forced to use a wheelchair. The Queen Mother died on March 30, 2002 at the age of 101, the oldest member of the British Royal Family in history up to that time. As she lay in state at Westminster Hall her grandsons, Prince Charles, Prince Andrew, Prince Edward and Viscount Linley (son of Princess Margaret) stood guard over her in a tribute known as the Vigil of the Princes, an honor performed only once before after the death of King George V. The Queen Mother was more beloved and respected than almost any other consort in British history and she deserved every bit of it.
Posted by MadMonarchist at 12:18 AM