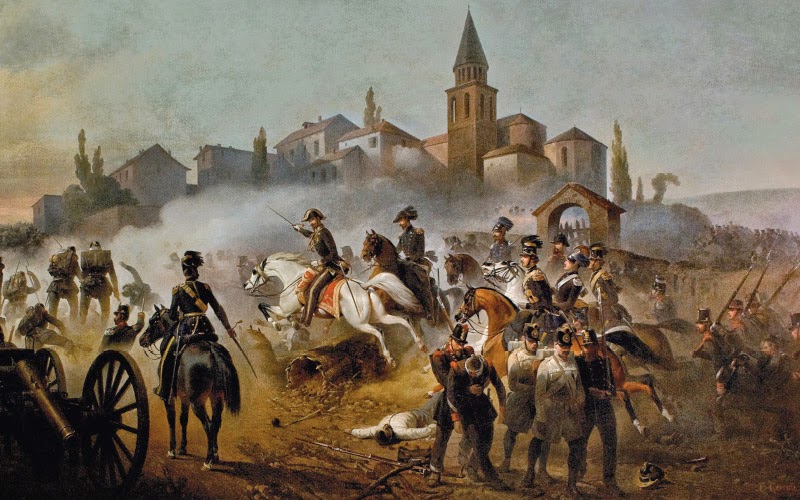 There are few things I detest more than people who denigrate and mock those few who have taken up arms on behalf of others and experienced the pain and hardship of warfare, of taking lives and knowing that others are trying to take your life as well. One would think that, in these modern times, no one would be so ignorant as to slander the military forces of an entire country, yet it does happen. The one that stands out to me most of all, and which is therefore the most infuriating, is those who mock and ridicule the armed forces of Italy, usually focusing on the late Kingdom of Italy and in particular on the Second World War. This is thoroughly disgusting just as behavior goes but it is also ignorant and plainly incorrect. To make matters worse, I have even heard some Italian people, even educated Italian people, say much the same thing in more polite and respectful ways of course, by claiming that Italy has no military tradition. This is so shockingly ignorant one hardly knows where to begin in refuting it. The fact of the matter is that Italy has a very long and illustrious military history and many proud military traditions that are still drawn upon today.

Obviously, one can go all the way back to ancient Rome for the complete story of Italian military achievements. There was Scipio Africanus who defeated Hannibal and conquered North Africa, Sulla and Pompey the Great who rose to fame in Roman civil wars. There was Julius Caesar who conquered Gaul and so much more, Marcus Agrippa who won the battles that allowed Augustus Caesar to become Emperor of Rome. Emperor Tiberius was a great soldier as were numerous other Roman monarchs, probably none so celebrated as Emperor Trajan who took the Roman Empire to its height of expansion. Even in the twilight of Imperial Rome there were men like Emperor Constantine the Great and others who accomplished magnificent military feats. Yet, having been through this argument often enough, I am well aware that (for entirely arbitrary reasons) many want to claim that the entire period of the Roman Empire somehow doesn’t count and should not be included on the “scorecard” of the Italian nation. If modern Englishmen can claim Alfred the Great as one of their own, or if the French of today can consider Charlemagne a native son, I fail to see how it is any stretch to consider the Romans to be Italians just because the modern-day people of Italy now include some additives. No one else can claim closer descent certainly.

However, this makes it a little difficult to determine for these naysayers when exactly the Italians started being Italian -as absurd as that rightly sounds. Surely, once we moved beyond the first millennium of Christian history we can say that Romans, Lombards and so on were more or less coming together as Italians. Even in that time, there are great Italian victories and heroes worth remembering such as Alberto da Giussano of the “Lombard League” who defeated the German knights of the formidable Emperor Frederick Barbarossa at the Battle of Legnano in 1176. There was also, during this period and the years that followed, the rise of the Italian city-states, particularly the maritime powers of Venice and Genoa which built extensive empires throughout the Mediterranean. These were based on trade and commerce but it took highly skilled soldiers and sailors to establish and defend them, fighting against the most powerful forces of the day. One early figure of the great leaders of these states was Ordelafo Faliero, Doge of Venice, who captured Zara and Sebenico from the Hungarians and conquered part of Acre in Syria. There were many such great military leaders over the centuries, one of the most famous, from the 16th Century was the Genoese admiral Andrea Doria who won many victories and ultimately became a top commander in the employ of the Holy Roman Emperor Charles V.

Renaissance Italy was resplendent with famous warriors and victorious battles. Italian mercenaries were used across Europe and with almost constant warfare going on between the Italian states and the great powers that used Italy as a battlefield it would be impossible to list all of the significant figures and events. Italians also played a key role in the ongoing warfare against the expansion of the Ottoman Empire in the Mediterranean. Amadeus V of Savoy, in 1315, for example came to fame defending Rhodes from the Turks with the Knights Hospitaller. Also in these times, clerical leaders were often military leaders as well and probably none are so famous as the “Warrior Pope” Julius II who waged a campaign to drive the “barbarians” out of Italy and indeed succeeded in freeing almost all of Italy from foreign control and uniting the country under papal leadership. Pope Clement VII, while not leading military forces personally, came close to such an accomplishment against the invading German and Spanish forces of Emperor Charles V thanks to the great military leadership of Giovanni dalle Bande Nere, sometimes called the last of the condottieri, who held off imperial forces against heavy odds until his death in battle in 1526.

There were also famous victories that, inexplicably, some people fail to associate with the Italians such as the epic naval victory at Lepanto in 1571. Most who have a passing familiarity with that famous battle are aware that the Spanish ships and overall command was held by the famous Don Juan of Austria but the vast majority of the ships were Italian and the other commanders were Italians. With much of the Spanish strength being derived from their control of Naples and Sicily, it was almost entirely an Italian force with ships and fighting men and support supplied by Urbino, Savoy, Tuscany, Genoa, Venice and the Papal States. During this same general period, the time of Tudor England, the Dutch Revolt and the Protestant rebellions in Germany, one of the most celebrated military figures was Alessandro Farnese, Duke of Parma who almost totally reconquered the Netherlands for Spain and was instrumental in defeating English-backed rebels in France. So great were his victories that many historians have labeled him as the greatest soldier of his time. Also, on the other side of Europe, when Emperor Constantine XI fought his gallant last-stand at Constantinople, the commander of his army was an Italian and most of the troops defending the city (about 3/5) were “Latin” Christians and a majority of those were Italians.

Another Italian military genius who commanded foreign troops was Raimondo, Count of Montecuccoli who came to great fame commanding forces of the Hapsburg Emperor. He was considered possibly the best soldier of the 17th Century, rivaled only by the great French commanders Turenne and Conde. His case is also extremely revealing when dealing with those who wish to denigrate Italian military achievements as I have come across such professed “experts” in military history who have not only never heard of Montecuccoli but have no idea who Turenne or Conde was either (something which should surely offend the proud partisans of the Kingdom of France). Another great imperial field marshal was Prince Eugene of Savoy, from the same branch of the venerable dynasty that ultimately became the Royal Family of Italy. His victories over the Turks and in the War of Spanish Succession earned him praise as the greatest soldier of his own time, rivaled only by his British ally the great Marlborough.

One of the many admirers of Prince Eugene was Napoleon Bonaparte who some have claimed to be as much an Italian military figure as a French one himself. He was born Napoleone Buonaparte and grew up speaking only the Corsican dialect of Italian before going to school on the continent and learning French. However, I would not try to antagonize the French by claiming one of their most celebrated military figures. It is enough though to see what credit he gave to the Italian fighting men of his day. Speaking of the contingent of the Kingdom of Italy that fought with his forces at the Battle of Borodino, Napoleon said, “The Italian army had displayed qualities which entitled it evermore to take rank amongst the bravest troops in Europe”. In southern Italy, the troops of the Neapolitan army did not enjoy the same reputation, to say the least of it. However, even there, it is worth pointing out that some performed very well under good leadership such as the counterrevolutionary ‘Army of the Holy Faith’ led by Fabrizio Cardinal Ruffo which liberated Naples, Rome and Florence. After the brief flirtation with the unification of northern Italy in the Napoleonic Wars, Italy was divided again and the next series of military conflicts involved the efforts to reunify Italy. This movement took on a life of its own and it soon became a race to see who would lead it to victory; the republican radicals of Giuseppe Mazzini or the constitutional monarchists loyal to the House of Savoy.

To be concluded in Part II...
Posted by MadMonarchist at 12:30 AM