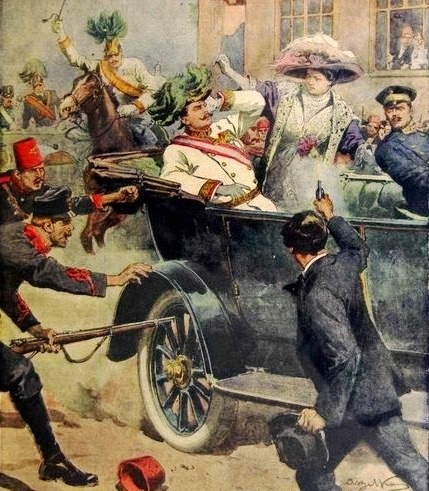 It was on this day in 1914 that Archduke Franz Ferdinand, heir to the throne of Austria-Hungary, and his wife Sophie, Duchess of Hohenberg, were assassinated by the Serbian terrorist Gavrilo Princip in Sarajevo, Bosnia when he was in town for military maneuvers of the Imperial & Royal Army. Princip was part of a gang of conspirators armed and trained by elements within the Serbian military which wished to provoke a war in the hope of creating a "Greater Serbia". It was the spark that ignited the powder keg of alliances, bringing about the First World War. Before it was all over, fighting would reach all across Europe, the Middle East, parts of Africa, Asia and all the oceans of the world, bringing down the Russian, German, Austro-Hungarian and Ottoman Empires. The institution of monarchy would never be the same again.
Posted by MadMonarchist at 2:59 AM