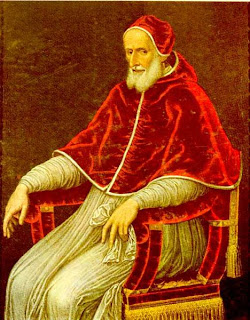 It can be a great mark of saintliness when one is as controversial centuries after their death as they were in life, and such is the case with Pope Saint Pius V of holy memory. Like all saints, he was a simple man, holiness being a difficult but not a complicated thing. However, like many popes he was also a man who often confused and infuriated the secular rulers of the world. He pushed a number of reforms in the Church, was a major force in the "Counter-Reformation" (which was actually the one authentic reformation in that it aimed to reform the Catholic Church rather than starting a new one) and was a firm defender of doctrinal orthodoxy. He was austere, determined, un-compromising and like all good fathers was not afraid to use firm measures when needed. At a time when the Islamic Ottoman Empire was dominating the Middle East, North Africa, the Mediterranean and the Balkans, he was a champion of Christendom under threat from the south and, perhaps more controversially, a terror for heretics in the north. This view, in all these centuries, has remained mostly unchanged. For Catholics he is still the Holy Father, saintly and admirable. For Protestants and Muslims he is still the greatest villain of the period.

He was born Michele Ghislieri on January 17, 1504 and joined the zealous Dominican order as a young man. The Dominicans were formed to combat the Albigensian heresy and were known for their preaching, doctrinal purity and staunch opposition to anything unorthodox. He eventually rose to become Inquisitor-General where he gained experience at dealing with the heretics who were, from the Catholic perspective, rotting Christendom from within at the precise time when they were under the most dire threat from without. When he was elected to the See of Peter on January 7, 1566 he lost none of the austere living he had as a religious. He lived in very plain surroundings, kept nothing of value himself and wore a coarse hair shirt under his papal vestments. He visited hospitals, cut spending and washed the feet of the poor every day. He was the model of humility and lived the Christian social doctrine. He also fought any hint of heresy tooth and nail and never gave an inch when anyone, no matter how powerful they might be, crossed the line of Church teaching. In doing so, he was often as much of an annoyance to Catholic clerics and monarchs as he was to Protestant ones.

St Pius V was a Catholic reformer in the true sense. The Council of Trent was his guide and he quickly set about putting the Church in order and stamping out the remnants of what he viewed as Renaissance worldliness that had crept in. He put out a new catechism to help spread the true teachings of the Church and formalized the Tridentine rite of the mass which remained in use universally throughout the Latin rite until after the Second Vatican Council. He also demanded his same standards of piety which he lived by of all clergymen. Pius V saw to it that all priests had to reside in their own parishes, kept a close eye to ensure conformity among the religious orders and abolished those which had fallen prey to corruption altogether. He made full use of the Index of Forbidden Works started by Paul IV and, by and large, totally wiped out all heresy in Italy.

This saintly pontiff also set an example in how to deal with the temporal sphere as well. He would not allow the power and prestige of any person to sway his determination to do what was right in the eyes of God, even when many Catholic world leaders claimed he was being foolish and needlessly confrontational. The most remembered example of this came in 1570 when he excommunicated Queen Elizabeth I of England who had renewed the schism of her father and started persecuting Catholics. Many have claimed, not without some justification, that this only worsened conditions for English Catholics, however, it was not as though Pius V had no grounds for the excommunication, in fact Pope Paul IV had already declared that Elizabeth I could not succeed to the throne on the grounds that she was not of legitimate birth. In any event, this should not be seen as all that outrageous considering that Elizabeth I obviously did not consider herself a Catholic and never had (though she made some pretense when her Catholic sister was on the throne, but even then no one really believed her). In that light, the excommunication can be seen, not so much as a punishment as a simple statement of fact. The Queen of England was not a Catholic and Elizabeth certainly never claimed to be.

The Pope could also be problematic for Catholic sovereigns, even ones such as the Catholic champion of Europe at the time, King Philip II of Spain (one of those who often claimed popes were insufficiently Catholic -of which today there are many). Despite being allies in the grand scheme of things Pius V and Philip II were often at odds, usually over the age-old issue of where spiritual authority stops and secular authority begins. Pius V also first supported Queen Catherine de Medici, the Italian regent of France, when she was leading the struggle against the Protestants in France. However, the Pope was outraged when the Queen came to terms with the Protestants and signed a treaty granting them freedom of religion. Pius V warned that this would prove to be nothing but trouble in the long run and, as such, many have since used this to criticize the Pope for being “intolerant” and against freedom of conscience but, hard as it may be to accept, French history would go on to prove that the Pope was right as the treaty by no means ended the religious problems in France. Besides which, it was only in recent times that people have decided that tolerance and freedom of religion were good things.

Again, Pius V was a simple man. He saw the world in terms of good and evil, right and wrong. He was also a man who believed in moral truth and absolutes. There was no doubt in his mind at all that Christianity was the one and only path to salvation for mankind and that, as a predecessor of his on the papal throne once said, that the Catholic Church was the one ark of salvation outside of which all others would perish in the flood. Therefore, he would have considered it not only absurd but utterly reprehensible to “tolerate” anything outside of Orthodox Catholicism. If Christianity as taught by the Catholic Church was right and good anything else was wrong and evil and evil would not and should not be tolerated. This makes a man like Pius V rather hard for modern minds to grasp and very easy to criticize, however, he would probably, in a way, agree with many of his modern critics and the last thing he would want would be to earn praise for being tolerant of that which he viewed as immoral or coming to any sort of accommodation with what was not orthodox Catholic teaching. Anything contrary he would resist, whether it came from a Protestant Queen, a Catholic King or a Muslim Sultan. 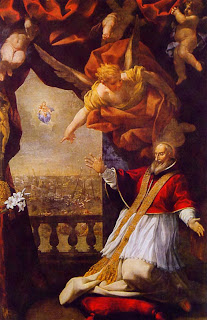 This has though, fairly or not, meant that most view the papacy of Pius V as a success in terms of the real, beneficial and long needed reforms he brought to the Church but an overall failure in terms of temporal politics, earning more enemies than friends. However, perhaps his greatest temporal victory as Pope came with his formation of the Holy League with Spain and Venice (along with some lesser Italian states and the Knights of Malta) to combat the threat of Turkish invasion. In fact, Pius V hoped for nothing less than the eventual liberation of Constantinople. He called on the faithful to pray the rosary for the victory of the Christian forces and at the stunning battle of Lepanto the Turkish fleet was destroyed by the outnumbered Holy League forces under Don John of Austria. The Pope made the day the Feast of Our Lady of Victory to give thanks to the Blessed Mother for her intercession.

To the disappointment of the Pontiff, the victory was not followed up with a crusade to liberate Constantinople. The Catholic powers of Europe had their own rivalries, the Protestant powers to worry about and there was also a bit of fear of the massive Ottoman Empire and a reluctance to risk lives and fortune to liberate the Eastern Christians who despised them. Pius V never recognized such matters, seeing only Christianity and Islam and the scandal of the capital of the old Eastern Roman Empire, the “second Rome” under Muslim rather than Christian rule. He was not the only Pontiff, certainly, to vainly hope for Christian unity in opposition to the foreign religion to the south. However, Pius V carried on, preaching morality, austerity with his policies of strict interpretation of doctrine, zero compromise with those who deviated from it and devout living until his death on May 1, 1572. He was canonized in 1712 by Clement XI. As stated at the outset, he remains a controversial figure. However, none doubt his own personal piety and where there is criticism of Pope Pius V it invariably stems from his stern refusal to tolerate any opposition to Catholic orthodoxy. Those who accuse him of being intolerant, intransigent and reactionary are perfectly correct. Whether one views those as negative attributes is another issue.
Posted by MadMonarchist at 12:11 AM