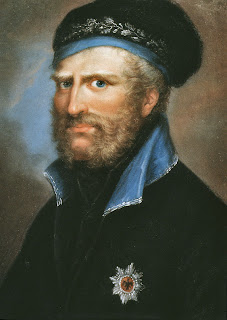 Prince Friedrich Wilhelm, Duke of Brunswick-Wolfenbüttel is probably one of the more conspicuous royals to have fought on the battlefields of Europe during the Napoleonic Wars and, I have to say, I like the style of the man. He was born in Brunswick in 1771, a younger son of the Duke of Brunswick-Lüneburg and Princess Augusta of Great Britain. When the French Revolutionary Wars broke out he was quick to rush to the front, joining the Prussian army in 1789 where, due to his royal rank, he was immediately commissioned captain. He rose rapidly in rank though not as rapidly as some might think considering that his father was the commanding Field Marshal of the Prussian army. Revolutionary France was the antithesis of everything he believed in and he fought them with unmatched ferocity. His motivation only increased when his father was killed at the battle of Jena, one of the many great victories of Napoleon and in which he too had fought as a Prussian major general. 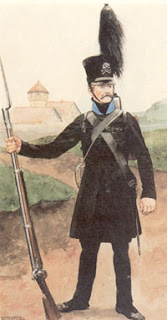 Since his oldest brother had already died and his other two older brothers were unable to succeed, after the battle of Jena he inherited the Brunswick family duchy from his father. Ultimately, Prussia was defeated by France in the ‘War of the Fourth Coalition’ and the Duke of Brunswick lost his ancestral home as it was ceded to the French as part of the peace agreement. Furious and blaming the French as the authors of all his misfortunes, he resolved to fight them to the bitter end, regardless of the circumstances. He had married Princess Marie of Baden and left his home (which had been given to one of the lesser Bonapartes as the ‘Kingdom of Westphalia’) and went to the Grand Duchy of Baden. When the great powers of Europe began to form a fifth coalition to take on Napoleon, the Duke of Brunswick saw his opportunity and was given permission by the Emperor of Austria to raise his own troop of irregulars. It was the start of one of the most famous, if colorless, outfits of the Napoleonic Wars.

The Duke raised and outfitted his own corps of men, known variously as the Black Legion or the Black Brunswickers because of their ominous uniforms; all black and sporting large silver skulls. Some have said this was done as a sign of mourning for the occupation of their native land by the French. A less romantic view is that the Duke intended it as a symbol of his utter lack of mercy for his enemy; that death was the business of these men and the French could expect no pity from them. They certainly made for an imposing image and, lest we be too hard on the Duke, his hatred of revolutionary France and Napoleon was fully returned. In fact, Napoleon sent him a message telling him so, presumably because the Duke was so closely related to the British enemy Napoleon despised the most. The Duke was a grandson of the late Frederick, Prince of Wales, and was the brother-in-law of the soon-to-be King George IV. 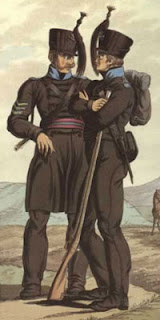 The Duke mortgaged virtually everything he owned to raise his legion of troops and for him, this was a fight to the death. However, the War of the Fifth Coalition went no better than the Fourth. He and his Black Legion did manage to liberate their native piece of Brunswick for a time but, yet again, Napoleon led the French to final victory and added still more territory to his expanding empire. However, the “Black Duke” was not about to surrender and just as he had fought his way eastward to join the Austrians in the first place, after their defeat he and his men fought their way north, all the way across Germany, where they were picked up and evacuated by the Royal Navy. He and his men were then transferred to the Iberian Peninsula, seeing action against the French across Portugal and Spain until, worn down by constant fighting, they were effectively wiped out. However, the Duke and the remnants of his men were able to finally go home after the French defeat in Russia and the liberation of Brunswick by the Prussians.

From 1813-1814 the Duke was restored to his lands, where he was beloved by the people as a national hero for his determined fight against their former occupiers. When Napoleon escaped from exile to make his second bid for power, the “Black Duke” did not hesitate, immediately reforming his old legion and leading them to the front once again. This time, however, they were not such a potent force as before, consisting largely of raw, young recruits but their commander had lost none of his determination nor his reckless courage. He was killed in action on June 16, 1815 at the battle of Quatre Bras in Belgium. However, his reputation only grew in subsequent history as he came to be seen as the ideal German prince. He refused to give in, refused to make any accomodation with France but instead risked all he had, his life, his fortune and his property to carry on the fight, under any flag possible, Austrian or British, until his homeland was liberated.
Posted by MadMonarchist at 12:41 AM