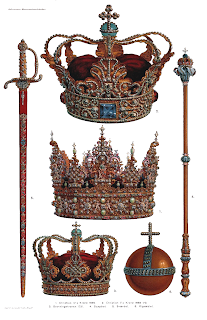 The royal regalia of Denmark is quite magnificent, befitting the oldest monarchy in Europe. The primary objects are three crowns, a scepter, an orb, the sword of state and an ampulla (a vessel of ancient Roman origin for holy oil). The royal regalia of Denmark is housed in Rosenborg Castle in Copenhagen and a royal residence until 1710. The first crown is the crown of King Christian IV, made in 1596 for his coronation. It is made of gold, enamel, cut gems and pearls with symbols representing piety, fortitude, justice and charity. It was last used for the coronation of King Frederick III in 1648. The second crown is the crown of King Christian V (son of Frederick III) and is most associated with the era of the absolute monarchy (though there was no coronation). It was made in Copenhagen in 1671 and is gold, decorated with sapphires, spinels, garnets and a generous amount of diamonds, topped by a very large ruby. That last crown is the crown of the Queen consort made in 1731 at the request of Queen Sophia Magdalen of Brandenburg-Kulmbach, consort to King Christian VI, who wanted a new crown.

In the old days, when it was recognized that a monarch ruled in conjunction with the clergy and nobility (and kings were nominally “elected”), representatives of these bodies would actually crown the monarch at the coronation ceremony. This tradition was upheld until the creation of the absolute monarchy by Frederick III. After that time, coronations were no longer held, though the crown was still worn, and the place of the coronation taken by the anointing with holy oil. The greater emphasis placed on that custom being to reiterate the “Divine Right of Kings”. However, when Denmark went in a more liberal direction with the adoption of the Constitution of 1849, which made Denmark a constitutional monarchy, the anointing ceremony was discontinued. The current monarch, HM Queen Margrethe II, began her reign simply by being acclaimed as Queen by the Prime Minister on the balcony of Christiansborg Palace. The royal regalia, or certain pieces, are still displayed on very formal royal occasions such as at the funeral of a monarch.
Posted by MadMonarchist at 7:35 AM