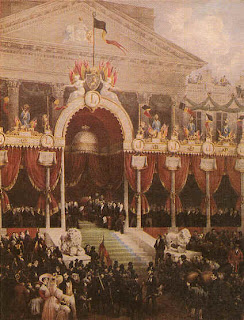 The Mad Monarchist wishes all Belgians everywhere a happy National Day! It was on July 21, 1831 that HRH Prince Leopold of Saxe-Coburg-Gotha was formally sworn in as His Majesty Leopold I, King of the Belgians. Considering what a rought time Belgium has had of it lately with poor King Albert II trying to make peace between the politicians of the feuding language communities who still have been unable to form a government, monarchists would do well to pay more attention to the plight of the Kingdom of Belgium as I know of no other monarchy in Europe that is under such a level of threat as that one. Many have taken advantage of the current crisis to use Belgium as an example of the failure of a multi-national state (using much of the same language that was once used against Austria-Hungary) but it may be a better example of the shortcomings of democracy and socialism. I say democracy because polls in Belgium that I have seen are so often contradictory. One will say a majority favor the preservation of Belgium while another shows continued support for the political parties that have almost driven the country apart. I say socialism because, it seems to me, the discontent of Flanders largely seems to boil down to resentment over the redistribution of their wealth to Wallonia (where the socialist party is even more dominant than the separatist party is in Flanders). Of course, as has happened to multi-national states in the past, many are quick to dismiss any chance for the survival of Belgium. I, of course, do not wish to downplay the dire emergency the kingdom is in -be assured I consider it as serious as the country has ever faced. However, I also believe that if the Belgians really want to get through this they can. Be it the Revolutions of 1848, the World Wars or the "Royal Question" the Kingdom of Belgium has survived disasters in the past and -if they so choose- can do so again. I strongly hope they will do so and that the proud history of the Kingdom of Belgium will continue into the future. God bless Belgium and Long live the King!
Posted by MadMonarchist at 12:24 AM