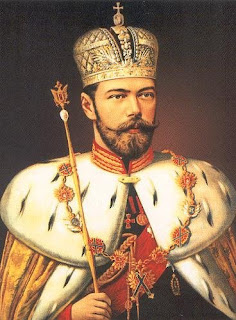 The last Romanov to rule Russia and a martyr for sacred monarchy and the Orthodox faith, was born Nicholas Alexandrovich Romanov on May 18, 1868 to Their Majesties Tsar Alexander III and Tsarina Maria Feodorovna (Dagmar of Denmark) at Tsarskoye Selo in St Petersburg. According to the Julian calendar then in use in Russia his birthday fell on the Day of Job, something which the future Tsar was to remark on quite a bit in his time of trouble. Like the Biblical story of Job, Nicholas was a man of impeccable character, honest, upright, devoted, God fearing and everything a good man is supposed to be, yet, he was to endure immeasurable suffering in the course of his life, trials and tribulations that he was the least to have ever deserved. His birth though was a moment for happiness, as it is any time a healthy male heir is born. He spent his childhood mostly at the Anichkov Palace with his two brothers (George and Michael) and two sisters (Xenia and Olga). 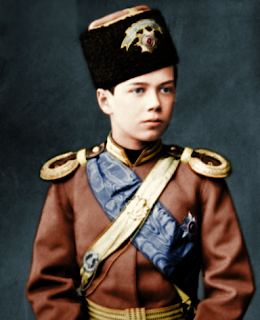 Despite what many think the Romanov children in Imperial Russia did not live a life of extravagance or indulgence. They slept on camp beds, had no hot water and were up at six every morning to begin their lessons. Nicholas had a Scandinavian governess and as a boy was energetic, innocent and a bit naïve. His introduction to the harsh world of Russian politics came when he was only 13 and watched the mutilated body of his grandfather, Tsar Alexander II, the victim of bomb-throwing revolutionaries, breath its last painful gasps of life. It was a scene Nicholas would never forget, not the least because of his admiration for the care and concern Alexander II had shown for his people, even the least of his subjects. Nicholas was given a harsh look at how good men were rewarded by terrorists. This was to have a lasting impact on Nicholas though it in no way diminished his desire to care for his people which grew out naturally from his own kind-hearted nature and paternal view of the Russian autocracy.

This also grew out of the example of his father, a kind man and a man of simple tastes but one who would not tolerate any threats to the Orthodox autocracy on which the Russian monarchy was based; he was a man Nicholas always viewed with awe and respect. When the time came for his formal education to begin, as was customary, Nicholas was taught in the palace by private tutors such as General Gregory Danilovich who made sure the future Tsar was self-disciplined, hard working and devoted to those ideals of a monarch responsible to God. There was also the Englishman Charles Heath by whose influence Nicholas came to speak and write English fluently. As a boy his many instructors commented on his diligence, respectfulness and perfect behavior. When he was 18 he began his military service as the commander of a squadron of Hussars. Having no role in government, he was often bored but enjoyed the company of his brother officers. However, he was a conscientious officer, always careful in his duties, never overlooking the smallest task and he won the affection of his men by taking an interest in them and was always willing to help them with any problem. He also chaired the committee on the establishment of the Trans-Siberian Railway, a job which, despite a lack of faith in him, he performed well. 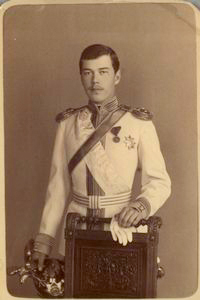 In the romantic sphere, Nicholas was guided into a relationship with a ballerina but finally set his heart on marrying the English-educated German Princess Alix of Hesse. His parents disapproved of the choice, preferring him to marry a Scandinavian bride, but Nicholas was adamant that he would have no other. Princess Alix resisted at first, being a very devout Lutheran and hesitant to change her religion, however, she loved Nicholas and at last agreed, becoming a zealous and faithful Russian Orthodox. Nicholas confessed his relationship with the ballerina, which he promptly broke off, and Alix only admired him all the more for his honesty and courage to admit a mistake. The two were deeply in love and would remain so for the rest of their lives, as deeply attached to each other as they were from the very start. However, their happiness together was interrupted by the death of Tsar Alexander III at which time Nicholas was reluctantly thrust into the duty of being Emperor and Autocrat of all the Russias. It was November 1, 1894 and although there were the usual worries that go with any change, there was also reason to hope. Russia was industrializing rapidly, the new Tsar Nicholas II was upright, honest and committed as well as personally charming and from the outset adopted a policy of stability, keeping on the ministers who had served his father.

On November 26, 1894 Nicholas and Alix, who had taken the name Alexandra Fedorovna, were married. Finally, on May 14, 1896 the couple had their formal coronation as Emperor and Empress of Russia at Uspensky Cathedral in the Kremlin in Moscow. From the beginning Tsar Nicholas II stated his priorities as being the defense of the Orthodox autocracy, maintaining the alliance with France, seeking greater access to the sea and looking out for the Slavic peoples of eastern Europe. He also showed himself a man of peace by promoting the Hague Conference to stop the increasing arms races across the continent, however, he did not shirk from confrontation either. With no real hope for a warm water port in Europe, Russia expanded in the Far East but the Russians were met and blocked by the growing expansion of the rapidly modernizing Empire of Japan. In 1904 competition over Korea and Manchuria resulted in war when the Japanese Imperial Navy launched a surprise attack on the Russians at Port Arthur. 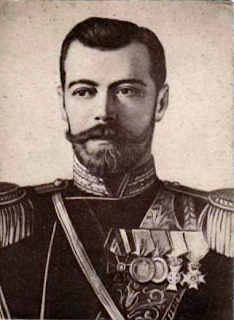 Nicholas II encouraged the war with determination and a clear conscience. He had always adored his fighting men and when new kit and uniforms were introduced, went on a cross-country hike in full gear to test for himself what his soldiers would be using. At one point, he expressed his desire to go to Siberia to take personal command of the Russian forces fighting the Japanese, but was dissuaded. It would have been only natural for him to have had a little bit of prejudice against the Japanese. When he was heir to the throne he had toured the Far East, was warmly welcomed in Siam, greatly celebrated in Vietnam when he visited Saigon but in Japan a fanatic had tried to assassinate him with a samurai sword. Yet, he had hoped war could be avoided but when it came he pursued it to the last. Japan seemed to be no match for Russia, but appearances were deceiving. Japan was close to the action whereas all Russian men and supplies had to cross the largest continent in the world to get to the front. Japanese ships were technologically superior to the Russians and the Japanese were fighting not just for territory but to prove something to the world. After a series of stunning defeats Nicholas II accepted an offer to mediate peace from the United States in 1905 and the war ended with the appearance of Japan triumphant and Russia humiliated. This quickly led to the first major outbreak of rebellion Nicholas II had to face against his authority and the Romanov autocracy as it had always existed.

To be continued in Part II...
Posted by MadMonarchist at 12:17 AM