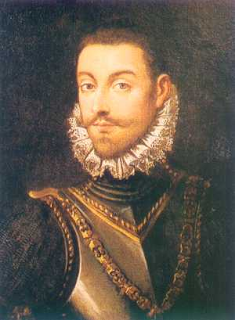 For me, there’s nothing better than a good old fashioned adventure story, be it in fiction (Hercules to Horatio Hornblower) or in actual history (the Conquistadors, Lord Cochrane, William Walker or Baron von Ungern). One of my favorite historical figures whose life reads like an historical adventure novel was Don Juan of Austria, illegitimate son of an emperor, a savior of Christendom, soldier, sailor and would-be rescuer of a certain damsel in distress. His very name and blood speaks of an earlier Europe before rigid nationalism became all the rage. The son of a German-born mother, a Belgian-born father, inheriting an Austrian name and being raised in Spain. Don John was born in Bavaria, the result of a fling between a singer named Barbara Blomberg and the Holy Roman Emperor Charles V, who was also King Carlos I of Spain. Shortly after his birth his Hapsburg father sent him to Spain where he essentially grew up Spanish. Being of imperial blood, however, he was given the best education possible, taught French and Latin, history, geography and, of course, the manly arts.

He did not see much of his father until his abdication when he left Brussels to retire to Spain. The former emperor hoped the boy would become a priest, which was not an uncommon expectation for someone in his position. He actually had no idea who his real father was until he was dead and gone and his half-brother, then King Philip II of Spain, told him so. He was not allowed to live at the palace but was taken care of, ranked behind the legitimate members of the Royal Family but ahead of the ranks of the Spanish aristocracy. He was sent to university to further his expected goal of becoming a cleric, but the consecrated life was not the life for Don Juan of Austria. He dreamed of adventure and military glory. When the Knights of St John were enduring their heroic siege on Malta in 1565, Don Juan left Barcelona to join the fleet King Philip was sending to their rescue. 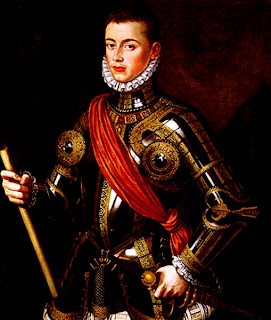 It was the beginning of an illustrious naval career, fighting the Ottoman Turks, masters of the most powerful naval forces in the Mediterranean and advancing with seemingly unbeatable might. In 1566 the King made Don Juan a Knight of the Golden Fleece and in 1568, upon turning 21, his half-brother made him Captain-General of the Spanish naval forces in the Mediterranean. He gained experience and respect in numerous engagements against the Barbary corsairs who plagued Hapsburg shipping along the Spanish and African coasts. For such a swashbuckling figure, with a reputation already as something of a ladies man, it might be tempting to think Don Juan was lacking in concern for more serious matters but such was not the case. Once past his youthful indiscretions he took his religion seriously as well as the political situation facing Christendom and the Hapsburg empire at the heart of it. When his nephew Don Carlos (son of Philip II) turned against his father, Don Juan told his brother of the deranged plan of his son. When Don Carlos died while under arrest, Don Juan was deeply saddened, as he was also at the death of the Queen. The whole situation caused a slight falling out between the two brothers and Don Juan retreated to a monastery to spend time in prayer and sort things out.

However, when Spain was threatened, Don Juan was quick to ride to the rescue as he did in 1569 when a rebellion broke out in Granada amongst the Moorish population there. King Philip gave him command and Don Juan set to work, educating himself on strategy, logistics, siege tactics and so on. He left nothing to chance and showed great care in his preparations for battle. He crushed the rebellion thoroughly and showed such courage, leading his troops at the front with little regard for his own safety, that he became immensely popular with the common soldiers who were inspired by his coolness under fire, heroism and willingness to share the dangers of battle with them. He had started out at sea, gained great fame as a general on land but he would soon be back to sea again where he was to earn his most famous place in history. 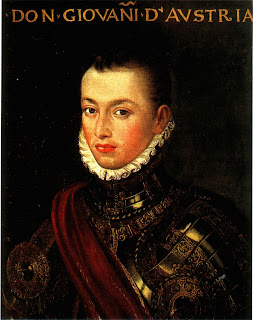 Ottoman naval forces were on the advance and southern Europe was shocked when Cyprus (previously a possession of the Republic of Venice) fell to the Turkish forces. Pope Pius V immediately began trying to organize a Christian naval coalition to stop their advance. Finally, a Spanish and Italian fleet of galleys was organized with contingents from Spain, Genoa, Venice, Savoy, Parma, Malta and the Papal States. Don Juan of Austria was given command and sailed out to meet the much larger Turkish fleet at the battle of Lepanto in the Gulf of Corinth in 1571. A seemingly miraculous change in the wind, some better weapons and a lot of heroism combined to give victory to the Christian forces, ending the Turkish threat in the Mediterranean. Don Juan was the hero of Catholic Europe for this daring naval victory and nothing seemed impossible for him.

After continuing his fight against the Turks in the Mediterranean, in 1576 he was appointed to command the Spanish forces in the long, grueling war in the Netherlands. This offered many opportunities for success but was also a terrible appointment too. Supporting the army had proved difficult, the fighting was fierce and the Low Countries had become, in many ways, the epicenter of the Catholic-Protestant religious struggle across northern Europe. He had to assume a disguise just to reach the Netherlands but he had lost none of his zeal and audacity. After crushing the rebels in the Netherlands he planned to lead an invasion of England where he would liberate Mary Queen of Scots, then being held prisoner by her cousin Queen Elizabeth, and, who knows, perhaps marry the widow renowned as such a beauty and rule England, Scotland and Ireland alongside her.

However, that was not to be. He won many battles for the Hapsburg Crown in the Netherlands and Belgium but was hampered by a lack of support from Spain. Worn out and increasingly ill he died of typhus on October 1, 1578 near Namur, Belgium. He was only 31-years-old. Still, the fame he acquired in his short lived earned him a degree of immortality. He had crushed rebel forces in Spain, beat back a Turkish invasion at sea and planned to sail across the Channel to rescue an imprisoned queen; it is no wonder his short life has been the subject of numerous books, plays, poems and so on. He was one of the great heroes of the Catholic countries in Renaissance Europe, rightly credited with saving Italy from Islam and saving Belgium from Protestantism.
Posted by MadMonarchist at 12:06 AM