The New Belgian King and Queen 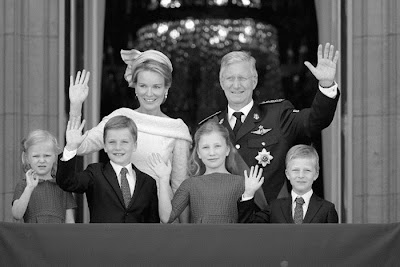 As Belgium now has a new King and Queen, it might be appropriate to give those unfamiliar with the new Royal Family a little background information. The new king was born Prince Philippe Leopold Louis Marie of Belgium on April 15, 1960 to the future King Albert II and Queen Paola. His godparents were King Leopold III and Luisa Princess Ruffo of Calabria. He was educated at the Belgian Royal Military Academy, Trinity College at Oxford and obtained a masters in political science at Stanford in California. Back in Belgium he trained as a commando and paratrooper and became a certified pilot, rising to the rank of colonel in the Belgian Royal Air Force. Hence, he is often seen in an Air Force uniform though he was later promoted to major general in the army and air force as well as rear admiral in the navy in preparation for his future role as commander-in-chief. He has long been known as the shy and quiet type, more like his uncle King Baudouin than his more flamboyant father, who was known for his love of fast cars and pretty girls in his youth. In fact, he was so much like his very serious and religious uncle that many expected King Baudouin to name Prince Philippe as his heir, skipping over his fun-loving little brother. Such rumors were undoubtedly encouraged by how close King Baudouin and Prince Philippe were. 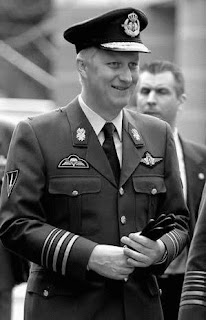 However, as we know, that did not happen and expectations that it would were rather misguided. King Baudouin was a very traditional man and despite having very different personalities, he was not about to disinherit his younger brother. Furthermore, this would have required changes in the law which no one in the government was willing to make. Some simply didn’t wish to bother and others were worried by how devoutly religious Prince Philippe has always been (he was once shamefully mocked for introducing a bill in the Belgian senate to outlaw pornography). The government had just gone through a constitutional headache because the very religious King Baudouin refused to sign a bill legalizing abortion and the last thing these politicians wanted was another monarch who would cause similar problems. When King Baudouin passed away and King Albert II came to the throne in 1993, Prince Philippe was given the title Duke of Brabant. Over the years, the Duke was subject to a great deal of disgraceful mockery and ridicule for his shy and conservative nature as well as being ‘out of step with the times’ or, in other words, having too many principles. There were also many unkind rumors that stemmed from his extended bachelorhood. However, Prince Philippe was simply taking the time to find just the right woman, which he eventually did. 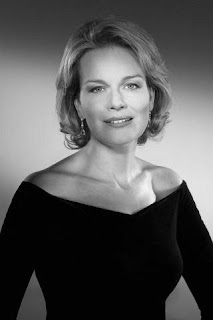 In 1999 the Duke of Brabant married Mathilde Marie Christiane Ghislaine d’Udekem d’Acoz. Born on January 20, 1973 she is the first Belgian Queen consort to be a native Belgian. She grew up in Bastogne, the daughter of a count and granddaughter of a baron. In her education she specialized in speech therapy, graduating with high honors and worked as a speech therapist in Brussels before obtaining a masters degree in psychology, graduating with honors. Her courtship by the Duke of Brabant was very low-key and it came as a surprise when their engagement was announced. Unlike her reserved husband, Princess Mathilde soon became known for her engaging and outgoing personality. From 2001 to 2008 the couple had four children; Princess Elisabeth Therese (now heir to the throne), Prince Gabriel Baudouin, Prince Emmanuel Leopold and Princess Eleonore Fabiola. Princess Elisabeth has won over the public with her cute dimples and serious manners, always trying to get things just right. Prince Gabriel and Prince Emmanuel have that adorably mischievous look common to so many little boys and tiny Princess Eleonore has always seemed the least impressed with her royal surroundings. 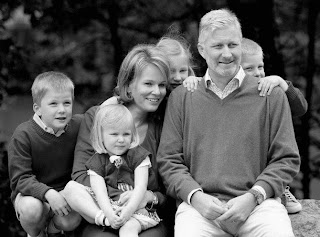 In recent years, Prince Philippe was charged by his father and the Belgian government with promoting Belgian business interests abroad which saw the couple go on many overseas trips from the United States to Vietnam. Princess Mathilde has also devoted a great deal of time to her extensive charity work for Unicef, the World Health Organization, the Princess Mathilde Fund and others. Parenting has also been a priority as both are very affectionate and hands-on parents. When with their children even the normally reserved Prince Philippe gains a youthful demeanor and an adoring light in his eyes as he plays with his children. Both are also very devoted to their faith and both have knighthoods in the Order of the Holy Sepulchre of Jerusalem from the Vatican. Belgium could not ask for a better Royal Family and with their devotion, kindness, intelligence and firm principles King Philippe and Queen Mathilde will certainly do their country proud. God bless the new King and Queen and God bless Belgium!
Posted by MadMonarchist at 12:17 AM

Email ThisBlogThis!Share to TwitterShare to FacebookShare to Pinterest
Labels: Belgium