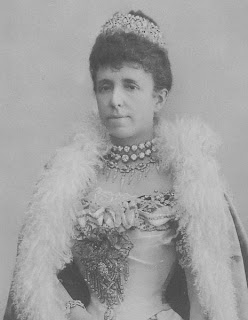 The last Queen mother of Spain to date was born Maria Christina Henrietta Desideria Felicitas Raineria of the House of Hapsburg-Lorraine on July 21, 1858 in Moravia to Archduke Karl Ferdinand and Archduchess Elizabeth Franziska of Austria. Her paternal grandfather was the famous Archduke Charles of Austria, Duke of Teschen, who gained fame for his brilliant victories over the forces of Napoleonic France. Amongst her many illustrious relatives were two cousins who attained the rank of emperor; Francis Joseph I of Austria and his brother Ferdinand Maximilian who was the ill-fated Emperor of Mexico. Her childhood was relatively uneventful and she grew into fine royal lady, fairly tall, very well educated with strong principles and good common sense. When she became old enough to consider marriage attention soon fell upon His Catholic Majesty King Alfonso XII of Spain whose first wife had recently died and who was looking to marry again. Only five years earlier Alfonso XII had become King of Spain after the failure of the first Spanish Republic, formed after the abdication of the Italian King Amadeus I. His mother, Queen Isabella II, was still alive but the problems associated with her had not changed. She was too conservative for the liberals and belonged to the wrong branch of the family for the conservative Carlists. Alfonso XII, however, was an acceptable candidate for the liberals and moderates and he succeeded in defeating the Carlists to become King of Spain in 1874. 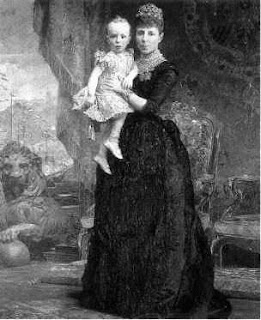 All the proper arrangements were made on Maria Christina was married to King Alfonso XII on November 29, 1879 at the Basilica of Atocha in Madrid. Because of all of the civil war and the bitter political divisions in Spain, it was not an attractive country for most royals but the new Queen Maria Christina showed considerable strength in dealing with a less than ideal situation. The proof of what a dangerous position she had come into was revealed almost immediately when a pastry chef tried to shoot the royal couple on their honeymoon. Nonetheless, with typical Hapsburg determination, she pressed on and did her duty both publicly and privately. In 1882 she gave birth to her first child, Princess Maria de las Mercedes of Asturias, followed by Princess Maria Teresa in 1882 and King Alfonso XIII in 1886. One will note that the last child was born a king as his father Alfonso XII, whose health had been deteriorating due to tuberculosis, died in 1885 at the age of only 27. This left Queen Maria Christina essentially in charge of a country that was torn by internal conflict and political divisions with many factions openly hostile to the monarchy. When King Alfonso XIII was born Queen Maria Christina immediately became regent of the Kingdom of Spain on his behalf. It was an unenviable position and one she had not been prepared for, however, she was intelligent enough to handle the situation as well as being intelligent enough to know her own limitations. When it came to business and economics, for example, she had little familiarity with such things and took the advice of those who did.

Subsequent Spanish historians have praised Queen Maria Christina for her impeccable commitment to upholding the law and observing all of the proper rules and customs for the government. Spain entered a relatively stable period, at least when compared to the earlier chaos and civil war, with power alternating between the moderate conservative and liberal factions. Universal suffrage and the Law of Associations were both passed during the regency and signed into effect by Queen Maria Christina on behalf of her young son. However, there was at least one very major foreign policy crisis that arose during the regency and that was the Spanish-American War. It was a crisis the Queen met with admirable courage and determination. The war with the United States came about mostly due to American sympathy for the rebels in Cuba who had been waging a long and irritating war against the local Spanish authorities. There were also those in America who had been pressing for (and even attempting) the conquest and annexation of Cuba to the United States all the way back to the earliest days of the republic. Dealing with the local rebels had not been particularly difficult for Spain, even after many years of steady decline starting with the conquest by Napoleonic France and followed soon after by the Carlist civil wars. Cuba still generated income for the Spanish economy and the insurrection provided a place for Spanish army officers to gain combat experience. However, what had been a Spanish problem suddenly became a potential international crisis when the United States and especially the American media began to seize upon Cuba as a major object of interest. 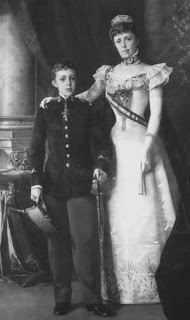 Queen Maria Christina was the one who had to deal with this problem and, like most people in Spain, was rather perplexed by why the U.S. would suddenly be inserting itself into the situation in Cuba as well as by the public outcry aroused by the American media. Part of the problem was economic. When the Carlist civil wars and the government instability in Spain caused the economy to collapse, Cuban planters looked to America for loans and this resulted in many Americans having a financial interest in Cuba. The U.S. began to champion the cause of Cuban independence, which Spain could not abide as Cuba was considered, not a colony, but a part of Spain itself. A plan was devised to end the rebellion in Cuba by granting the island autonomy, similar to what had already been given to Puerto Rico by the Spanish government. However, the United States still persisted in demanding the Spain make concessions to the rebels though most authorities in Spain had no idea what more concessions they could offer. Queen Maria Christina decided to ignore the saber rattling from Washington DC and pinned her hopes on the plan for autonomy to calm the situation. Unfortunately for her, America would not give Spain time for the plan to take effect. With the media having worked the American public into an anti-Spanish frenzy the declaration of war was swift after the destruction of the battleship USS Maine in Havana Harbor in 1898. The U.S. blamed a Spanish mine while Spain protested that the ship had exploded on its own, a fact later proven by a U.S. investigation in 1974.

There was no doubt from the very beginning that Spain was hopelessly outmatched in the war against the United States. Nonetheless, the U.S. sent an ultimatum to Madrid demanding that the Spanish withdraw from Cuba and when Spain broke off diplomatic relations with the United States an American declaration of war soon followed. Queen Maria Christina was horrified by this turn of events but had no choice but to take Spain to war as she could no more order the abandonment of Cuba than the President of the United States could abandon New York or Massachusetts just because a foreign power demanded it. Queen Maria Christina did appeal to the other crowned heads of Europe (which was all of Europe at that time save for France, Switzerland and tiny San Marino) to come to the aid of Spain. She protested, with considerable foresight, that if the monarchies of Europe did not come together to oppose this blatant aggression on the part of the American republic on behalf of Spain, the United States would only grow stronger and stronger and soon other countries would suffer the fate of Spain until America was completely dominant and not a monarchy remained in Europe. There was some sympathy for Spain in some quarters but, as we know, no other countries decided to get involved. The Spanish fleet was decimated by the American navy, Cuba was conquered and the few remnants of the once mighty Spanish empire fell to the United States. When Spain finally had no choice but to sue for peace the United States gained Cuba (temporarily), Puerto Rico, Guam and The Philippines. Manila had fallen after only symbolic resistance with the Spanish garrison effectively tossing America the keys on their way out and, while gaining the islands, America also gained her first colonial rebellion as U.S. forces had to be rushed over to suppress the Filipino independence movement that Spain had already been dealing with. 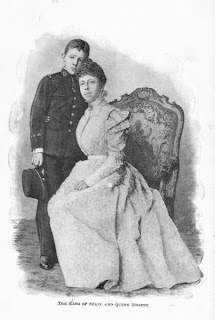 It seemed as though disaster was breaking out everywhere. In Spanish Morocco there was rebellion in the air and in Spain itself political divisions and potential civil war began to threaten yet again. Queen Maria Christina dealt with it all with admirable dedication and persistence but wanted nothing more than to be able to hand power over to her son. This finally happened in 1902 when King Alfonso XIII reached his majority and was able to exercise his full constitutional powers as reigning monarch. With immense gratitude Queen Maria Christina withdrew from the halls of power and devoted her time to charity work. She remained a familiar and respected figure in Spanish society for the rest of her life. On the night of February 5, 1929 she retired to her bedroom and after midnight felt a sharp pain in her chest. A maid asked if she should call for the King but the Queen mother said no, not wishing to disturb anyone. A short time later she had another pain in her chest and passed away. She was buried in the royal monastery at El Escorial having guided Spain through what was, in some ways, her most difficult and traumatic period since the end of the civil wars. She was a lady of great character, strength and insight and one of the most dedicated rulers Spain has ever had. She was also eerily prescient in predicting the coming dominance of the United States and republicanism in the Twentieth Century.
Posted by MadMonarchist at 12:15 AM