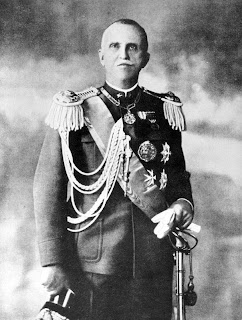 King Charles Albert: Born in 1798 in Turin he succeeded King Charles Felix as King of Piedmont-Sardinia in 1831. During his reign he would lay the foundations for the creation of the unified Kingdom of Italy. More of a mixed bag for me, I find myself defending him more often than criticizing him simply because he seems to have more critics today than defenders. Charles Albert presided over some very good things and some very bad things during his reign. He suppressed republicanism in his kingdom, knowing that it would create divisions detrimental to their professed goal of national unification, which he shared -which was a good thing. He made his kingdom the most modern and forward-thinking on the Italian peninsula (not always so good, especially as it concerned the Church) and in 1848 granted a constitution that was to survive long after he was gone as the framework of the future Kingdom of Italy. His aspirations for Italian unity were, at the time, widely shared. Yet, when he declared war on Austria in the First War of Italian Independence, he alienated many of his neighbors but he was determined to see an end to Austrian control over northern Italy, territory they obtained only by a deal with the French revolutionaries. Unfortunately for him, he was defeated but accepted full responsibility, abdicated in 1849 and went into exile in Portugal. He died there a short time later. It was not a glorious start, but it was a start.

King Victor Emmanuel II: Born in 1820 he succeeded his father as King of Piedmont-Sardinia in 1849, making peace with Austria and reestablishing order in his country. He joined in the Crimean War alongside France and Britain, defeating the Russians in 1856. After making an alliance with France he went to war against Austria and won the region of Lombardy. When revolution broke out in the central Italian duchies he moved in to restore order and the states voted to join Piedmont-Sardinia in the movement for Italian unification. After Garibaldi and his red shirts attacked the Two-Sicilies he moved his army south, taking command of the war effort and was handed control of the southern half of the peninsula. Much of these disturbances arose when local monarchs granted constitutions in times of crisis only to revoke them later. Victor Emmanuel II was the only monarch to maintain the constitution his people have and it is for that reason that he was known as the “Honest King” -so that has to be seen in context. To his enemies he was the “Thief King” and to his friends as the “Gentleman King” for his affable personality. Today many are inclined to criticize him but there was hardly a case in which he advanced his cause where the only other alternative was not a socialistic republic. His victory was certainly preferable to that alternative. In 1861 he was declared the first King of Italy, the first monarch to reign over the whole Italian peninsula since the time of ancient Rome. After the Third War of Independence he won Venetia and the Iron Crown of Lombardy. Rome was united to Italy in 1870 but he died with still greater aspirations in 1878. The biggest problem with his reign was the start of the “Roman Question” which both sides should have done more to avoid. His character left something to be desired but, on the other hand, I do admire those who ‘think big’.

King Umberto I: Born in 1844, Umberto I succeeded his father as King of Italy in 1878 and quickly went about the work of consolidation and making a place for Italy on the world stage as one of the regional powers of Europe -and I salute him for that. Since the old ally France had gone republican and was attempting to spread their influence in Italy, King Umberto I signed on to the Triple Alliance with the empires of Germany and Austria-Hungary. This is often misunderstood as it was not so much a political alliance of countries but a dynastic alliance of monarchies for the purpose of creating solidarity against subversion rather than any international agenda for or against other powers. He made sure, for example, to keep good relations with Great Britain. He successfully suppressed socialist revolutionaries (and anyone who shoots down socialist mobs is okay in my book) and supported expansion into Africa with the establishment of the first Italian colonies in Eritrea and Somalia. Victories were won against terrorist forces in the southern Sudan region but Italian forces met a shocking setback at the hands of the Emperor of Ethiopia (who Italy had helped place on the throne) at the battle of Adowa in 1896. A generous man at home, though often secretly, most did not know that King Umberto likewise secretly paid the ransoms the Ethiopians demanded for the return of his captured soldiers. After seeing off an expedition to China he was assassinated in 1900. Known as “Umberto the Good” or the “Good King”, he was that.

King Victor Emmanuel III: Born in 1869, Victor Emmanuel III became King of Italy upon the death of his father in 1900. His reign would see the height of power for the Kingdom of Italy as well as its darkest moments. For most people he will probably always be the most controversial Italian monarch, even though he presided over a string of national successes -at least until World War II. In 1911 Italy won Libya and the Dodecanese Islands from the Ottoman Turks. In 1915 the King led Italy into World War I on the side of Britain, France and the Allies. With their victory Italy gained some Austrian territory but hardly any of what she had been promised by the other powers. He was criticized (later) for not using the army to stop the Fascist march on Rome in 1922 but these were the same sort of people who criticized his father for calling out the army to stop socialists. So, shooting down socialists in the streets is bad but shooting down fascists in the streets would have been fine. Got it. Peace was finally made with the Church in 1929 and in 1936 Italian forces conquered Ethiopia, making Victor Emmanuel III an Emperor. Immediately after, Italian troops were sent to Spain to aid in the victory of the nationalists over the communists. In 1939 Victor Emmanuel III became King of Albania and despite his objections Mussolini took the country into World War II in 1940. When Sicily was invaded the King dismissed Mussolini and arrested him. Crushed between the Axis and the Allies, the King finally abdicated in 1946 and died in exile in Egypt in 1947. I have a soft spot for VE3. He was a much smarter man than he often gets credit for, he had his priorities in order and he really cared about the monarchy as an institution. There were many things he should have done differently but I despise the way so much of the criticism directed at him came from people who blamed him for not doing the things they could have done but lacked the courage to do.

King Umberto II: Born in 1904, Umberto II was the last King of Italy, reigning for 34 days from May 9th to June 12th. Trained as a soldier like all Savoy princes, he had presided over the Italian invasion of France in 1940 which lasted only a few days before the French surrender. He was excluded from most high level positions and discussions because of his opposition to the Fascists and their Nazi allies. Mussolini greatly distrusted him and kept him under scrutiny at all times. After the Fascists were removed from power his father handed him the effective role of regent as Lieutenant General of the Realm and in that role he won the respect of many Allied leaders. In 1946, mostly for the month of May, he became King of Italy but was forced to accept a referendum on the future of the monarchy. The vote was highly irregular and clearly fraudulent but came back in favor of a republic. The King accepted exile and died in Switzerland in 1983. A great deal of slander has been spread about Umberto II, mostly from the left but, ironically, largely coming from stories invented originally by the Fascists. He was a good man who cared about his country, his people and the Royal Family and both his enemies at home and the Allied leadership should have given him an honest chance. He deserved so much better than what happened to him. The only thing I can fault him for was not being more unequivocal concerning the royal succession which might have saved loyal Italian monarchists a great deal of trouble.
Posted by MadMonarchist at 12:08 AM