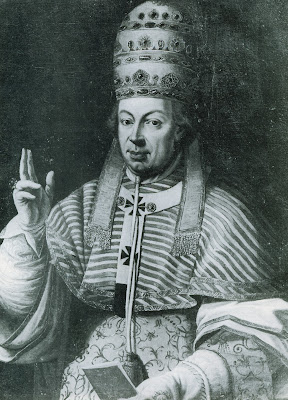 "When they have spread this darkness abroad and torn religion out of men’s hearts, these accursed philosophers proceed to destroy the bonds of union among men, both those which unite them to their rulers, and those which urge them to their duty. They keep proclaiming that man is born free and subject to no one, that society accordingly is a crowd of foolish men who stupidly yield to priests who deceive them and to kings who oppress them, so that the harmony of priest and ruler is only a monstrous conspiracy against the innate liberty of man.

Everyone must understand that such ravings and others like them, concealed in many deceitful disguises, cause greater ruin to public calm the longer their impious originators are unrestrained. They cause a serious loss of souls redeemed by Christ’s blood wherever their teaching spreads, like a cancer, it forces its way into public academies, into the houses of the great, into the palaces of kings, and even enters the sanctuary, shocking as it is to say so."

-Pope Pius VI, “Inscrutabile” (On The Problems Of The Pontificate)

Wise words from the Pontiff and I really miss the days when the Pope would actually call a group of people "accursed" who deserve it. Can't imagine that happening these days.
-MM
Posted by MadMonarchist at 1:44 AM