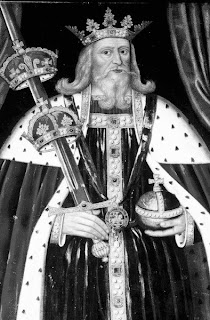 King Henry III: After the disastrous reign of King John, a recovery was called for but Henry III would not be the monarch to lead it. He was not as bad as his predecessor it is true, but he wasn’t much to write home about either. His efforts to centralize power alienated the nobles, the country was awash with mostly French exiles looking to make a quick buck and Henry III had little luck on the battlefield and ended up renouncing vast territories in France. Defeated at home by Simon de Montfort, Henry had the shame of seeing the first parliament called during his reign by the man who had bested him. Today that means Simon de Montfort is a celebrated forefather of representative government but it mostly makes me annoyed with Henry III for being unable to stop him and allowing things to get to that point. He did finally escape rebel clutches and led the royalist forces to victory, which I give him credit for, but he died not long after, not a terrible king but far from successful.

King Edward I: Now we are getting back on the right track. Scotland may still hate his guts (and they should) but Edward I was one of the greatest English kings ever. He was a brave man, a shrewd statesman, a clever military commander and just an overall inspiring figure. He improved the law code so much that he became known as the “English Justinian”, conquered Wales and subdued Scotland. When William Wallace led the Scots in revolt, Edward I crushed them and had the troublesome Scot executed. That will always make him controversial, as does his expulsion of the Jews from England (Oliver Cromwell let them back in) but from the point of view of England alone, Edward I was everything one could hope for in a monarch. Harshness in his direction regarding Scotland should be tempered by the fact that his initial involvement came at the request of the Scots themselves (again, always a bad idea) and when it came to the basic things that kings of his time were expected to do; be strong, provide decisive leadership, win victory on the battlefield, expand the kingdom and secure the succession, he did them all. He was awesome.

King Edward II: Perhaps the only thing England can fault Edward I with was fathering so lackluster a monarch as Edward II. Thankfully, his reign was merely an unfortunate interval between two of the best kings the Plantaganets had to offer. What can be said of Eddie the second? I’ll admit it is tempting to just say “colossal puff” and move on, but I tend to be suspicious of gossip be it contemporary or of Medieval vintage. He lacked all of the drive, ambition and strength of his father, seemed to care little for anything other than parties, sports and his friends. The Scots gave him a sound thrashing, undoing the victories of his father, then suffered the indignity of being defeated by his own rebellious nobles. In the end, he was brought down by his formidable wife, Queen Isabella of France, who was a much more fascinating character than her husband. Advised to abdicate, Edward II predictably cried and then did the best thing of his reign and handed the crown over to his son.

King Edward III: After the embarrassing reign of his father, Edward III was just what the doctor ordered and one of my favorite English monarchs of all time. King Edward III was like a force of nature, he started the Hundred Years War by laying claim to the French throne, led his knights into victory after victory, defeating French forces far larger than his own and even taking the French king, Jean II, prisoner. He may not have been the best administrator but his victories make up for it. His success on the battlefield was so total and so brilliant that the English army came to be seen as the premier military force of the time. He also made English the official language at court for the first time, created the Most Noble Order of the Garter and was the one who divided Parliament into the two houses of commons and peers. He had the misfortune to reign during the Black Death and were it not for that his achievements might have been greater still. Contemporaries hailed him as the greatest monarch since King Arthur and with good reason. Even if he had done nothing else, the battle of Crecy alone would warrant him being considered one of the greatest of English kings and that was one victory among many. In every way one could measure a great Medieval monarch, Edward III more than measures up.

King Richard II: Perhaps no other English king had a tougher act to follow than Richard II and it is inevitable that he fails to measure up to the lofty standard set by his father. He is blamed for being a bad ruler and even for setting the stage for the disastrous Wars of the Roses but I tend to be a little less harsh toward Richard II than most people. He won early credit with me for his courage in standing up to the Peasant’s Revolt even though he was practically a boy at the time but he dealt with those rebels solidly enough. Still, he was not very adept at keeping calm and unity in the kingdom and has been accused of tyranny then as now. However, my impression is that it is not so much what King Richard II did but how he did it that proved to be his downfall. He was not a “people person”, he bided his time, built a considerable private army (wearing a white heart as a badge, I remember that) and then struck back at his enemies after most had come to see him as a pleasure-loving weakling. Still, Richard II will probably always be remembered as a schemer rather than a leader and he was finally abandoned by most of his men and defeated.
Posted by MadMonarchist at 12:14 AM