The Passing of Lady Thatcher 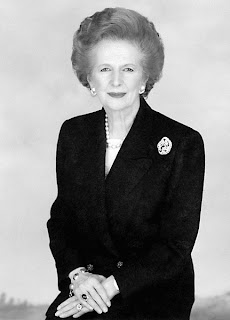 Yesterday morning I received the call from ABM that former British Prime Minister Margaret Thatcher had passed away and most news outlets have covered the story, some more prominently than others. Of course, here at The Mad Monarchist “we” take a rather dim view of politicians in general but to me, Mrs. Thatcher always seemed like one of the better ones. In my admittedly biased view, it probably helped that she was a figure of the 1980’s which is my favorite decade (at least in my own lifetime). The communists were still the bad guys, Reagan was in the oval office, Thatcher was in #10, God was in his heaven and all was right with the world. After the dreary, tacky, lackluster 70’s more people seemed to be waking up to the fact that socialism didn’t work. Margaret Thatcher came to power in a Britain that was in the socialist doldrums, being out-produced even by some on the other side of the iron curtain. So many successful people had fled the country that English had become practically the second language of Monaco. No one took Britain seriously and yet, after her term was over, the U.K. was more prosperous, more productive and more respected. Her record was not perfect of course, but no political leader can ever please everyone or avoid every mistake. Thatcher, at the very least, proved that the U.K. could compete, could stand up to the Soviet Union, the bureaucrats in Brussels and could -and would- defend itself against aggression.

It is admirable that Thatcher did not bend to the winds of passing popularity even though this meant that she would attract the ire of many people. Even today, when most try to avoid speaking ill of the dead, some people cannot contain their hatred for the woman. However, even there, she earns all the more sympathy from me. The way I see it, anyone who the IRA tried to assassinate and who the likes of Gerry Adams and George Galloway so strongly condemn must have had a great deal to recommend her. Even knowing nothing about her, the caliber of those who attack her would suggest to me that she was doing something right. In my case, it also helps that Ronald Reagan was such a friend as I consider him the least objectionable American president of my lifetime. He too was strongly anti-communist and I will always give him immense credit for speaking up in defense of the late Shah of Iran who his predecessor had so callously abandoned. I appreciate Lady Thatcher for her tough opposition to socialism in Britain, her courage in the face of republican terrorist attacks, her staunch opposition to the Soviet Union and her wise skepticism towards the growing European Union. I also appreciate the fact that she was a monarchist, though even there, her enemies will try to argue the point. 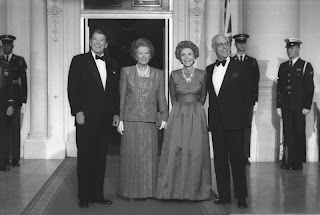 Every time I have said any kind words at all about Margaret Thatcher (and everyone knowing what an ardent monarchist I am), I have invariably been met with the claim that HM the Queen “didn’t like” Mrs. Thatcher or that the two practically hated each other. Nothing could be further from the truth. That should be cleared up right now. The whole story stems from one anti-Thatcher press secretary at Buckingham Palace who went to the press, putting his own prejudices in the mouth of the Queen. As soon as the story was made public by The Sunday Times, the Queen immediately contacted Mrs. Thatcher to assure her that there was not a shred of truth to it. The press secretary in question did not remain in his position for long after. Thatcher came from a staunchly royalist family and as her senior foreign policy advisor Charles Powell said, “No one could curtsy lower than Margaret Thatcher”. It is true that the Queen and Mrs. Thatcher were never what we would call ‘chummy’. They simply did not have compatible personalities for that but the Queen had great respect for Mrs. Thatcher, her talents and her achievements and Mrs. Thatcher had the utmost respect and reverence for the Queen and the monarchy itself. After Margaret Thatcher was ousted from power in a Tory Party coup, it was indicative of the respect the Queen had for her in how quickly Her Majesty bestowed on the former Prime Minister the Order of Merit and the Order of the Garter. Later, of course, she was also given a seat in the House of Lords though long-time readers will now that The Mad Monarchist does not take very seriously the idea of “life peers”.

When it comes to the domestic policies of Mrs. Thatcher, I am generally supportive for the simple reason that privately owned enterprises invariably tend to be better managed than collectively owned ones. In the field of foreign policy, of course, there was no bigger event in the early years of the Thatcher period than the war with Argentina over the Falkland Islands. This was more important for Britain than most may have realized at the time because, even now, I think few people realize how differently things could have very easily gone and because I don’t think it would have happened without Margaret Thatcher. I don’t think General Galtieri expected the British to actually put up a fight for the islands when he sent the invasion force in and, though I could be wrong, I doubt that there would have been had anyone other than Thatcher been in power. Most people had stopped taking Britain seriously, and with good reason. The economy was terrible shape, the military had been reduced to dangerously low levels and most probably thought that once Argentina grabbed the islands there would be some complaints at the UN, some conferences and so on but in the end, once Argentine rule had been imposed, it would never be dislodged. Mrs. Thatcher, however, took it very seriously and showed the world that Britain was not about to be pushed around and that British arms would defend Crown territory and subjects of the British Crown wherever they might be in the world. In the decades since the conflict, Argentina has continued to shout and complain at every possible venue about the issue of the Falklands but, the world will notice, they have never again actually tried to do anything about it. Evidently, the lesson was learned.

Finally, I have to add one more opinion just in case this rather tame article has not managed to offend anyone. As I said before, I think it speaks very well for the late Prime Minister that she is so reviled but such characters as Gerry Adams and George Galloway (y la presidenta Kirchner tambien) but I also admire the support she showed for someone most of the mainstream world today considers a terrible villain. I speak of course of the late General Augusto Pinochet of Chile. No one is going to win any popularity contests by defending, however mildly or in any way speaking up for Pinochet. However, he had done Britain a good turn and Margaret Thatcher was not going to remain silent when he was in his own hour of need. Many have condemned her for being cozy with a fascist dictator ever since, but that was to be expected and it makes me all the more proud of her for speaking up anyway. For myself, I do not think General Pinochet was nearly as bad as most claim, I think he saved Chile from a much worse fate and I think the country was far better off because of him, even if he will never get credit for that. Anyway, that is my view, and I certainly know that saying so will win you no friends and because of that, I admire Mrs. Thatcher all the more for doing what she thought was right regardless of the political fallout. 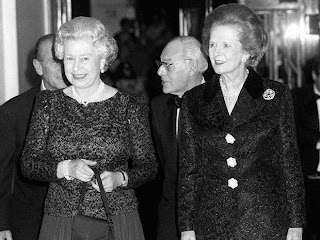 Again, as with any politician, I cannot be too effusive with my praise but I think Margaret Thatcher was one of the better ones and I am sad to see her go. I think, overall, she did right by her country, made things better rather than worse and who was not afraid to be unpopular. This was a woman, after all, who dared to speak some unpleasant truths about the French Revolution in an interview with a French periodical in the anniversary year of 1989. She remarked quite correctly that human rights were not something invented by the French Revolution, did not find their vaunted ideals very complete nor were they ever lived up to. Under her watch the civil list went up, the absurdity of royal taxation was averted and new (actual hereditary) peers were created for the first time in decades. All in all, the monarchy did quite well on her watch. She may not have been perfect but she was that rare politician who cared more for conviction than popularity and certainly stands out amongst the teenage nonentities who have come after her. She will be missed.

Posted by MadMonarchist at 1:18 AM